And what sort of trouble are you getting into this weekend? 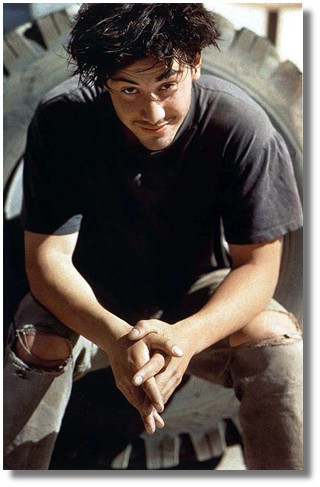 Skits, Fran, Suzie and Tim, Chey, Joelle and Mikey are coming to Vegas this weekend.

What am I doing? Waiting very impatiently for my copy of Point break to arrive from UPS which says it's out for delivery since 8am this morning. It's 9pm. I don't think it's coming today. :(

What a pic:D
I hope y'all have fun:)
Me? Playing Hockey, ye-ah. Hard work and lotsa fun; hope all who go to celeb hockey games have funn tooo:D

My weekend plans? Ever so exciting! Doing my taxes! Why? So I can laugh my ass off at everyone standing in line at the post office at midnight on April 15!

Besides, we had a big ice storm here today, so I can't go anywhere anyway. No ice skates :(

I will definitely keep my TV tuned to CNN this weekend. I see possible international incidents resulting from this high-spirited group hitting Vegas.

Ya'll have fun,krix...but keep some bail money at hand. :)

If there is fun to be had in IA then I'll be getting ready for it! Not much chance of an international incident there rj. To all of you, have a great weekend!

I'll tell you later about my fun ; o
You have a great time and say hey to folks that I know.
later

Hey back at ya, tess. ;) Veeeeegas. Vegas. Veeeeegas. *does the Vegas dance*

Have oodles of fun krixy! We'll just stay here and stare at the pretty pictures.

Sleep: an hour here, an hour there. I've always been an insomniac.

Once suggested to Garrison Keillor to turn the Chatterbox Cafe into an internet cafe...he just laughed! Winnie the Pooh is my fav! Speak french but never use it so haven't bothered to learn another. I'm hoping to find time to kick-back and play pool.

What am I doing?

hi-de-ho bloggers and blurkers. As we speak I am in a computer course to upgrade my skills. I am doing this in the futile attempt to get a better job. I am taking Visual Basic.NET

The only problem with taking a course like this is if I don't have access to Visual Basic immediately after taking this course, I'm gonna forget everything I learned! So I might have to fork out some $$$ to get the student version of VB so I can do some playing around.

The only problem is ... instead of playing around with VB, I see myself frittering away my time photoshopping and blurking in my spare time. It's a hard life when you have so many addictions.

Catz is going out this weekend!! YES!!! It's a new world order let me tell you! LMAO My son is over at his dad's all weekend... I went out last night and got hit on by a 24 year old dj... who was cute and boosted my ego to no end... But been there done that and don't feel like taking the "Cher/Demi" road again... Going out again tonight,though somehow I did find time to download a shitload of amazing brushes and create a few walls..hehehe... I am a photoshop freakazoid and I love it!

Catz is going out this weekend!! YES!!! It's a new world order let me tell you! LMAO My son is over at his dad's all weekend... I went out last night and got hit on by a 24 year old dj... who was cute and boosted my ego to no end... But been there done that and don't feel like taking the "Cher/Demi" road again... Going out again tonight,though somehow I did find time to download a shitload of amazing brushes and create a few walls..hehehe... I am a photoshop freakazoid and I love it!

oops how did that happen?
Sorry Krix.. I apparently have an echo

The trouble I got into? Since I am owing an unspecified amount of money to repair water damages to the condo below me I--went out and spent an inordinant amount of money on Bobbi Brown makeup (I never wear makeup) and "hope in a jar" skin treatments so that I can look like Diane Keaton, since I now have my all-white outfit...

I took myself out to lunch, and then had a manicure and pedicure.

How is it that spending money you don't have makes you feel better? (temporarily) Retail Therapy, baby.

I'm learning to share your addiction Catz. Will never get any work done now! Its the trouble I'm getting into ;-) As for Retail Therapy...as long as you're not responsible to "fix" the retailer, its great fun!

I hear ya Shelz! In fact I just got some AMAZING brushes and I just cannot stop making walls with them LMAO..

*pout*
I want to hear the audblog too!

I had a great weekend, I saw SGG for the first time with Maddi, whom I met 'here' :-)
She's really cool, and Julian's *HOT*! :-D So it was an excellent combination. She had to take the last train home *pout*, so afterwards I went to a bar where I know a lot of people, and got completely drunk. I mean totally.
I believe I had to be carried home... I don't remember the rest, but I woke up with my clothes still on, make-up smeared all over my face, and clutching a sandwich in my right-hand. I guess I was hungry just before I passed out ;-)

Now I'm at work to catch up on all the stuff I should have been doing on friday, during my panic-atack ;-D

Julie! So glad SGG finally made it your way and that you and Maddi had a great time. Isn't Julian the most adorable thing ever???

And, waking up with the sandwich: TOO funny! Post-alcohol nutrition is very important. :)

Julie! here on a weekend and I miss it. Damn! There wasn't much in the audblog sweetie. Just everyone there saying hi and krix saying she's got some ridiculous shoes we'll get to see later. There here now. Whoa!

P.S. I feel so guilty, it's all my fault you're working on a weekend. *sad* But happy you finally got to see SGG. I saw it too, on my birthday, after dinner my husband took me to see it again. *smile*

I think its fortunate you managed to keep the clothes Julie! Maddi sounds like a riot!

Hahaha, what are you accusing Maddi off, Shelz? LOL! She's a very decent girl, not as 'wild' as me, so don't accuse her of lewd behavior ;-D
*snicker*

Besides, the only girl *I* would ever consider taking my clothes off for is Krix ;-)
But she'd have to get me pretty drunk and unconcious for that *snork*, and I'd probably charge her a small fee afterwards ;-D

I hadn't really placed the blame on Maddi Julie! I have a pretty good sense where the blame belongs -- you're a "wild woman!"

As for the guilt...it's ok, I'll come see you when you're in the gutter...I'll still luv ya then...I'll be yer consultant through your bankruptcy (who needs prostitution when y've got consulting?!)...hehehe

Don't worry Shelz, as it turns out, I won't have to, after all :-)
To prevent me from starving, Zen is sending me a WHOLE box of maple-syrup products! YUM! :-D

Ohhhh.... All of *this* going on during the weekend, and I was totally unaware of it! And being called a riot too! Wow! *blushes*

Julie! sweety, I'm glad you got *warm* again after totally freezing on the way to the station. Although just the thought of dr. Julian would have done the trick, I'm sure. Warm fuzzy thoughts, mmm...

I'm really sorry about my 'reputation' though... It would have been nice to have all those keanu-babes thinking of me as a 'wild' woman. :-)
Oh well. My mum always says it's perfectly okay to dance on the table with a lampshade on your head--provided you're sober. That sounds like a good maxim to me.

*does non-alcoholic wiggle in her seat*

Posted by: Maddi on February 12, 2004 03:05 AM
What's on your mind?.....
(new here? please read this before commenting)
Remember, this is a fan site.
Keanu Reeves is in no way connnected to this website.
Please do not make a comment thinking he will read it.
Comments are for discussion with other fans.
Thank you.