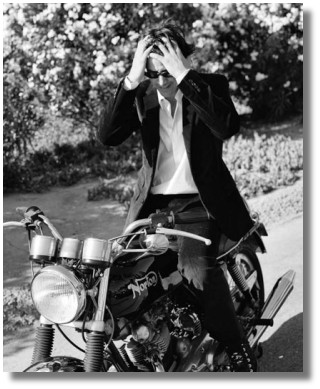 Keanu's eyes shine. "I had this girlfriend," he begins. "This girl was just the most rockin' girl in the world you could have on the back of a bike because she was fuckin' fearless. One night, it was like 12:30, at the time I was practicing doing wheelies, and she said, 'let's go!' So we went on the freeway and it was just magic. She would grab me - she had these really great breasts and really long hair - and we had no helmets and no goggles and we were going like a hundred and thirty miles an hour on five lanes of freeway, with not a soul in sight. And this incredible cloudless moon just hangin' there." He sighs happily. "I've had some of the best times of my life on a motorcycle."

awesome photo there:):):) The photos from ADC are mostly all full of awesomeness, very cool.

OT--This may be on the off topic side of things but this guy was literally just on Steve Harvey's Big Time that apparently goes to Cornell but is an AirGuitar Champion that even went to Finland and won there (He was wearing some funky bright red Asian-style robe with tight red silky-ish pants and no shirt; the guy was also of Asian decent ...)
Guess what he "played"? He air-guitared literally a la Bill and Ted by performing the riffs to "Play With Me" (I believe by One Power Tool) from Bill and Ted's Excellent Adventure.
LOL-I don't think anyone in the room (either with me in my kitchen or even in that audience) realized how funny the connection was and I'm sure the performer did it on purpose too :D hehehe

"Play With Me" was performed by Extreme.

I had a subscription to Details back in 1989 - before it became a guys mag - and I remember this interview - the comment "she had really great breasts" has stuck with me ever since. I thought it was hilarious then and I still do!! I've known Keanu was straight - and a tittie man! - for 15 years.LOL

From what I'm told,I have great boobs.. and my hair is growing. I wouldn't mind a spin on the cycle either :) Let's go Keanu :).. thanks Krix!!..
hugs and God bless your friend
Janice

From what I've been told? I'm sorry, but that line just cracked me up. LOL *smirk*

Ahahahaha, I remember that artical. it is one of my Faves. I think I brought like 5 copies of it too. :LOL:

Who knew that when you entitled this entry as "Love and Rockets" that people would be elaborating on their rockets?

He just sounds so fun. This was obviously written before he started closing himself off from giving out personal details. It's nice to know that he does love a good time. ;)

well, my boobs are kinda average but very flattering things have been said about them in the not too distant past. i've never been on the back of a bike, but then i've never been asked by anyone as handsome as him.

did you check out the photo in the link? he looks so, so young! almost too young to have a girlfriend or a motorbike. unbelievable.

Pop a wheelie! Remember when that was a cool phrase? I'm comin' over all nostalgic lately...

OT:Thanks for the correction Rhonda:)

Posted by: stacey717 on February 6, 2004 12:46 PM
What's on your mind?.....
(new here? please read this before commenting)
Remember, this is a fan site.
Keanu Reeves is in no way connnected to this website.
Please do not make a comment thinking he will read it.
Comments are for discussion with other fans.
Thank you.