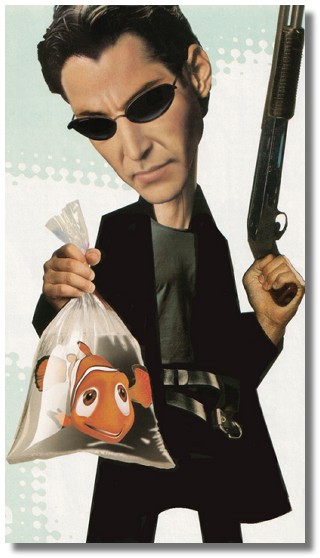 Thanks to The Daily Thud for this fun picture from Premiere Magazine.

Oh my. Shouldn't it be evil Agent Smith holding poor Nemo there? Oh well. It is a fun pic.

The way Nemo is smiling I'd say Neo ( funny ,,,Neo-Nemo) had just resqued him from the hands of that evil girl in the dentist's office....

Something like, "it's as easy as shooting fish in a barrel?"

are those keanu's hands? they don't look like those gorgeous mitts...

Cute picture! I *still* haven't seen Nemo. Must do that. I've heard Ellen DeGeneres is soooo funny in it.

How about NEO FINDS NEMO? :) Hehehehe.. Happy Early Birthday Zen!! Hope it's the best yet, with many more years to come..
hugs and God bless
Janice

Thanks guys! :D How do you all know it's my birthday eve?

i had the same thought, cas... not his paws at all.

Hey, Zen! You mentioned it in a post a while back and I remembered because it's the same day as my brother-in-law. I SWEAR I'm not a stalker! :)

I *am* known for my ability to remember people's birthdays, though. I think it comes from my belief that life can be pretty crappy sometimes, so EVERYBODY deserves just one day out of the year that is *all about them*!!!

So...may tomorrow be *all about YOU*, sweetie!

Posted by: JeannieNC on February 8, 2004 07:11 AM
What's on your mind?.....
(new here? please read this before commenting)
Remember, this is a fan site.
Keanu Reeves is in no way connnected to this website.
Please do not make a comment thinking he will read it.
Comments are for discussion with other fans.
Thank you.