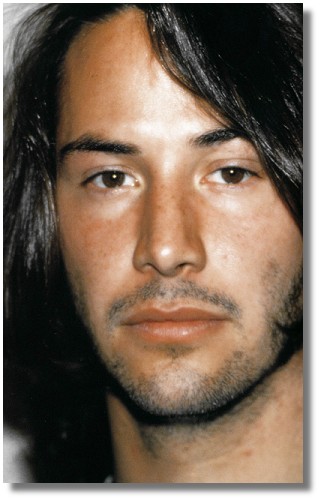 This is so funny. I have a folder of pictures like this called "freckle evidence" -- because my friend Laura was convinced he has ivory, freckle-less skin.

Not so. Love the freckles! Thanks, krix, for my grin of the day... oh and the shiny shiny hair ain't bad either...

The freckles do seem to have disappeared, though...*not* that it has affected his stunning looks!

Oh! This picture is so beautiful, so mesmerizing, so dreamy, so gorgeous, so, so...
*starts to search for words to describe the 'magnificentness'*
Oh! It's so beautiful that words fail me! So handsome! It's so, so.... Keanu-ish! :-)

BTW: if you notice a spike in your bandwidth thing *now*, it's me. My eyes are glued to the screen (which kind of hurts) & I seem to be unable to leave this entry.
This pic is so beautiful I might be stuck at this page untill early morning ;-D

Holy Sh*t, that is definitely the sizzlin' POTD if I ever saw one, thank you!

Yes, the frecklage is very cute; I love seeing well-known people that actually have freckles (and that you wouldn't notice usually) especially because I have much frecklage myself (and used to desire skin that had less freckles as I thought barely any adults really had freckles...)
Keanu's freckles are pretty cute when visable;)

...they always seem to cover them up for a movie and I guess he hasn't seen much of the sun since "Constantine" got started - always working, poor baby! But I love every single of his freckles and, like Nudel, also have pics stowed away in different folders: freckles, hands, legs... and TGIAF!!!

The freckles always show when he's tanned, but as Niobe said, he hasn't done that much lately. That's good actually, sun is all sorts of bad for the skin.

Is it okay if I want to take him to bed when I look at this picture?

GORGEOUS pic!!! I am speechless...

Yes, it's bad Zen. It's bad because I got there first! See? right at the top of the page! *wink*

I see freckles. I see shiny hair. *looks closely*
I see nothing about bed, bedroom, sheets, blankets, handcuffs...er, *cough* Anyway, I dispute the fact that you got there first nudel. I. Said. Bed. First!

...oh, but Zen, if you look closely at his eyes, you can see all sorts of, erm, promises there, even those that don't require a bed... ok, I'll stop, he makes me feel very Minnesota right now!

Wow!!! This is one of my favorite pictures of him! Thanks!

He's sooooo dreamy here, I have to comment twice. Man, the thoughts running through my head right now....okay, I must compose myself and get back to work...in 5 mintes, I still need to stare. 5 more minutes and I should be okay-hopefully.

I LOVE pics. of Keanu where his cute freckles are noticeable.

This is one of those pics. that you keep looking at for a long time. You just can't stop. It's mesmerizing I tell you!

yay for freckles :) I don't know if i ever realized keanu had freckles. i have them myself, although a lot less than when i was a kid and they only really show on my face when i've been in the sun. lucy lui has awesome freckles too. ok, but back to this pic, it's truly dreamy. those eyes *sigh*

Posted by: laura on January 28, 2004 01:20 PM
What's on your mind?.....
(new here? please read this before commenting)
Remember, this is a fan site.
Keanu Reeves is in no way connnected to this website.
Please do not make a comment thinking he will read it.
Comments are for discussion with other fans.
Thank you.