god gave rock and roll to you 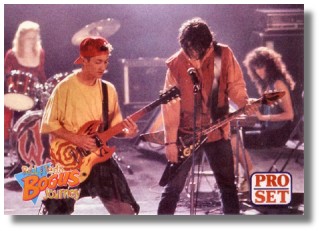 The Telegraph UK recognizes Wyld Stallyns along with Spinal Tap and Almost Famous' Stillwater as one of film's most memorable bands...

Bill S. Preston Esquire (Alex Winter) and Ted "Theodore" Logan (Keanu Reeves) were created by writer Chris Matheson as a withering parody of Californian surfer-cool, but he imbued them with so much charm that they became unlikely screen idols. Their two-man, Van Halen-inspired rock band Wyld Stallyns is the worst in history, bar none.

Only just before the end of Bogus Journey do they actually learn their craft. By this point, they've played "20 questions" in Hell and beaten Death himself at Clue. They end up saving mankind through the sheer power of rock.

The soundtracks to the Bill and Ted movies are second to none and still work today.

well, i guess technically they were a "two-man" band, but there were also two women (historical babes) involved, and even the two babies there at the end... ;)

...and the two Good-Robot-Us's, and Death, and the Stations.

It's a guilty pleasure--I love both those movies, and I love the music from them! I'm old-school, I guess.


Posted by: bakednudel on January 27, 2004 05:41 AM
What's on your mind?.....
(new here? please read this before commenting)
Remember, this is a fan site.
Keanu Reeves is in no way connnected to this website.
Please do not make a comment thinking he will read it.
Comments are for discussion with other fans.
Thank you.