I don't know where it originated, but have you ever seen the shorthand where the names of a couple are combined to form a single name, i.e., "Spuffy" and (ugh!)"Bennifer"?

It's actually very handy, and sometimes it just works. "TriNeo" "Robecca", even?

I believe it was Joelle that dubbed Fran and Wendy - "Frendy", which is so damn cute you can almost see the little bluebirds flying around it.

Sometimes you have to have to try a few combinations out.
"Jjaddie" is pretty lame, but "Fraks" kinda works. 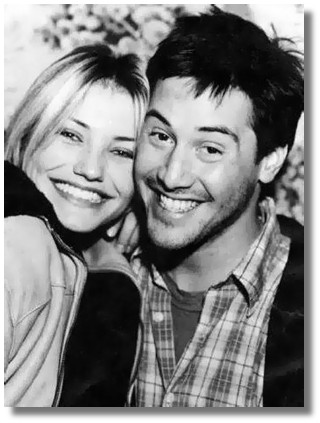 As far as Keanu and I are concerned, I think "Keanix" sounds like a programming language, but "Krianu".....gosh, that just rolls right off the tongue, doesn't it?

So, if you and Keanu were so cute a couple that you went by one name, what would it be?

I've actually thought about this before *blushes*!!

Sometimes, my name is shortened to Mis (which I don't like very well), but when combined with Keanu, we could be Kiss! I think I like that better than Melanu.

Anakea??? Keana??? Ridiculous, both of them - sound like Hawaiian girls' names

How about Nakeanu (pronounced Nake ee a nu) or Keancy? :}

well, as you guessed it , I am older than the lot of you so for me , it would definetly be 'Mom'

I like the idea of you trying to find new names with the name Keanu or similarity in it. sounds like a lot of fun..

All I can think of is 'Newkey' not Nookie..

Janke or Kejan.. Kejan sounds like some sort of spice doesn't it? LOL!.. This is cute, thanks for the loss of a few brain cells for this LOL!!>> :).. hugs and God bless

Keanelle is kind of cool.

I also thought of "Krianeux", which looks a mess but actually is pronounceable and uses all the letters.

Kewl Krix, like those names too :) Yours are too cool.. I don't think they are hard to pronounce though..:)
hugs and God bless Janice

this is kinda fun :)

mine would be Reanu or Kebecca???
I don't know, sounds kinda stupid to me

i didnt notice that there was a melissa before me and though of kiss! sorry!

*stumped* shame on me for a silly screen name...

I guess this is proof of our inevitable destiny to be apart.

meant to say, I *love* the personals (for Valentines?) and that's one of my favorite grabs, since I fell in love with Thomas A. Anderson before Keanu!

How about meanings? My real name means "house of poverty." Keanu means "cool wind." Put them together: wind flattens shack. And he does, oh, he does.

Hee. I love being Frendy. It's much better than Wanscico. ;)

Quite alright Liza. No need to apologize. We can all share the love.

However, when it comes to meanings, I don't fare so well. Melissa is Greek for honey bee. Combine this with Keanu's name and you get Cool Breeze Stings.

it was as clear as a glass of water

krix,
Was just reading your blog and loved what you did with the whole "Fraks" situation that I started doing it with Keanu's characters and his love interest.

Devil's Advocate: "Kevianne" now is that just friggin cuter than all get out or what?! Some of these when you hear them and you picture the couple you can't help the fact that your toes start to curl.

The Matrix: I liked your "TriNeo!"

Hardball: "Conoreth" or "Elizabor" (I don't think I like the latter so much)

If you put Eddie and Lilly together for "Chain Reaction" it really doesn't change.

Oh, that was fun!

All good baby all good...

Yes - you do get up to some strange things whilst I'm asleep...

Can't think of anything else...

lorianu? keanori? how about lori reeves? i kinda like the sound of that...

My name would be Keandre of course. Its so funny I have played this game before in my mind a million times!!!!

so much fun that a girl has to de-lurk. hi, team!

i would be Beenu or Keabee. both sound like tellytubbies' poor relations. real name? Canu or Kearol.

just taking this space to say thanks for keanuvision. you rock.

'Julianu!', which sounds a bit like 'Galliano', the *hot* fashion designer.
Combined with the '!', which I blatantly ripped off from designer Joop!, I'd say we'd make a hell of a team on the Parisian catwalks ;-)

I'd just be happy if the press refered to us as, "Keanu with his wife, what's her name." Wouldn't we all?

Oh, almost forgot! I hope the bass playing is coming along great!

sounds OK to me, what do you say?

Here is what I came up with:

Okay, I think I took this a little overboard. :0)

Posted by: Maureen on February 2, 2004 12:34 PM
What's on your mind?.....
(new here? please read this before commenting)
Remember, this is a fan site.
Keanu Reeves is in no way connnected to this website.
Please do not make a comment thinking he will read it.
Comments are for discussion with other fans.
Thank you.