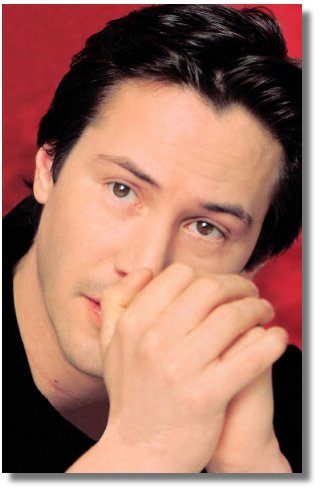 VIRGO (Aug. 23-Sept. 22): Pope Jean Paul II has canonized 477 new saints, exceeding the total of the last 86 popes combined. His secret? Previously, candidates had to have performed three miracles, whereas now it's two at most. Other saint-makers have been inspired by the Pope's example. The Church of the Subgenius is creating an average of 2,100 new saints per year (non-Catholic variety), while the Discordians are close behind with 1,875. I'm embarrassed to say that my own faith, the Temple of Sacred Uproar and Rowdy Blessings, has been lagging far behind -- until now, that is. In honor of the miraculous feats of beauty, truth, and love that "Free Will Astrology"-reading Virgos have been pulling off lately, I hereby bestow sainthood on every one of you. You may hereafter put a "St." in front of your name.

I've already been praying to him for months now...!

So, to my fellow parishoners of the Sacred Heart Church of St. Keanu, when is his feast day? I guess that would be Sept. 2?

"St. Keanu of the Spontaneous Ovulation"

"St. Keanu of the Incomparable Beauty"

Not that its necessary, but just a few suggestions to further clarify his saintdom.

Melissa, every day would be Feast Day as far as I'm concerned! wink:wink

think of all the lovely icons he's already inspired...the miracle that is keanu...it's solid true...

i have to say this is one of my ultimate fav pics of Keanu...so innocent, so vulnerable, so warm, inviting, peaceful, full of grace, calming, desirable...

I'm with you, Dawni. This photo is one of my favorites. COMPLETE warmth and serenity, it is.

But based on those qualities, he would qualify.

Though if he's a saint then so am I. lol

YES! Thank's to him i'm reading some Shakespeare(a miracle on my life!!) Is true he's the 'saint Keanu of the incomparable beauty' 'Saint Keanu of the climax-inducing bass chord'
kisses
St.Naomi

Posted by: Naomi on January 7, 2004 05:11 PM
What's on your mind?.....
(new here? please read this before commenting)
Remember, this is a fan site.
Keanu Reeves is in no way connnected to this website.
Please do not make a comment thinking he will read it.
Comments are for discussion with other fans.
Thank you.