nothing rhymes with orgasm, either

Thank you to the Keanu Pic-of-the-Day Club for these gorgeous DeChristo pictures... 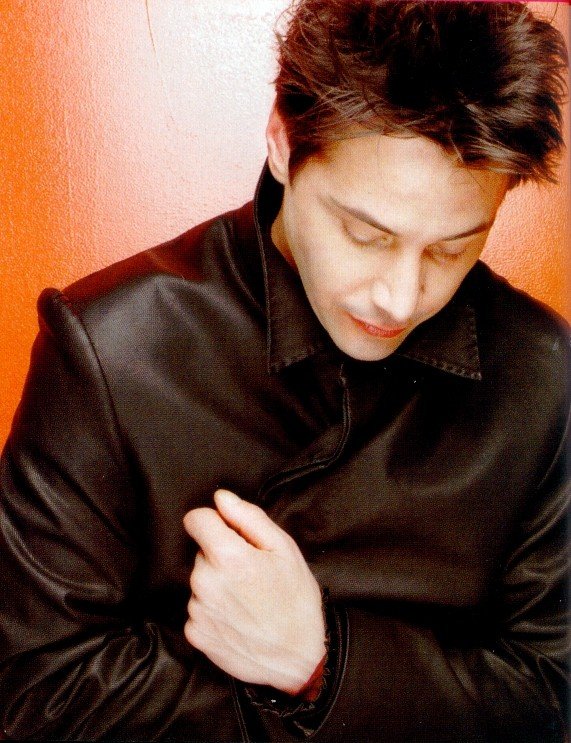 ...and for the translation of a French Premiere article about the session.


Friday, April 23, 1999, Miauhaus Studio on La Brea Ave. After a few uncertainties, we were worried that he wouldn't show up. Keanu Reeves suddenly appears on his motorcycle wearing a helmet and a grey three-piece suit. The bike, the same old black 70's Norton.

His agent, who also handles public relations worldwide for Sharon Stone, Christina Ricci and half a dozen of other clients, gives us exactly two hours to interview and photograph him. Therefore, the meeting will take place during his make-up session.

After turning down Speed 2 for The Devil's Advocate, Keanu Reeves totally disappeared from the media during a whole year. Thus, his name was no longer being associated with any of the multi-million-dollar Hollywood projects. He doesn't hide the fact that it was not only a choice... After a fourteen-year career, fatigue had accumulated even though his amazing face and look didn't show it. With a gross of 100 million dollars in only three weeks, The Matrix is the perfect movie for a comeback. If Keanu makes efforts to promote this film, he also knows how to remain a star: he accepts only a few rare photo sessions. For the simple reason that he hates them (like three quarters of the actors, by the way).

Reeves doesn't seem to be aware of the endless transactions that preceded his arrival after a night spent rehearsing with his band Dogstar. "May I smoke?" he worries. "Of course! It's for the French Premiere!" In Hollywood, the French are the worst "smoking polluters". Reeves hasn't shaved and is not willing to do so at all. "Depends on the razor you propose..." After five minutes of intense reflection, we tell him that it's not that important and that his morning shadow suits him quite well. Which, suddenly, makes him want to shave absolutely. "Now that we tell you it's okay, you want to shave! You really do have a contradiction streak!" - "Yeah, that's me", he says with his mocking smile. He goes to the bathroom. During the lathering stage, we talk about motorcycles a bit: no, he's never driven with Johnny Depp for the simple reason that he doesn't know him; he has a 70's Kawasaki 750, yes; otherwise, he's an ardent admirer of Nortons. We get back to make-up and questions.

"During the lathering stage..."

would you believe that fairly early in my keanuadulation (around 2 years ago) i drove through atlanta on I-85 behind a large truck with that second picture plastered on the back? talk about traffic heaven! i could have (should have?) passed that damn truck 13 different ways, but somehow i was content to just ride in the wake, the lovely keanuwake...

The morning shadow look?? Most definitely. I think he looks very sexy when he hasn't shaved.

Some of my favourite pictures...

Krix, please, where can I find the rest of the article? French or English, doesn't matter. Un bacione e grazie Brezza

R.j.girl, you're not weird! I know of at least *one* other fan who has a total fetish for 'shaving Keanu' as well :-)
- And I'm actually quite suprized that she didn't use this text as an excuse to post a 'Dracula-shave scene' pic with it ;-)

"Depends on the razor you propose..."

It also reflects that slightly formal way of speaking Keanu has. I just love it.

BTW, is the article suggesting that Keanu was not being offered jobs after he finished Devil's Advocate? I thought he took on The Matrix and was out of the country for months that's why he didn't do any publicity. Can someone clarify this for me? Thanks.

I wish they had taken pictures of him shaving instead. These are nice though...

Well, I am hereby inviting whoever shares my shaving fetish (ahem...krix?) to hop up on the bathroom counter on the other side of the sink to watch him, along with me.

Does he have to stop at his face?

Wheee! You're a twisted little pup...I Love It!

breeze, the complete article is posted at: http://jabondy.free.fr/267Matrix/3UK.html

One day I'm going to learn how to photoshop, & conjure up an image of Keanu covered in foam, that will *both* leave you gasping for breath for the rest of the day. I might even include bare feet, as well ;-)

Thanks for the link sta-cie. I'd never read that one. And Julie! yes to the bare feet please.

breeze, I hadn't read it either. When I read your request, I did a google search and came up with it. So, thank YOU for asking.

Posted by: sta-cie on January 8, 2004 11:07 AM
What's on your mind?.....
(new here? please read this before commenting)
Remember, this is a fan site.
Keanu Reeves is in no way connnected to this website.
Please do not make a comment thinking he will read it.
Comments are for discussion with other fans.
Thank you.