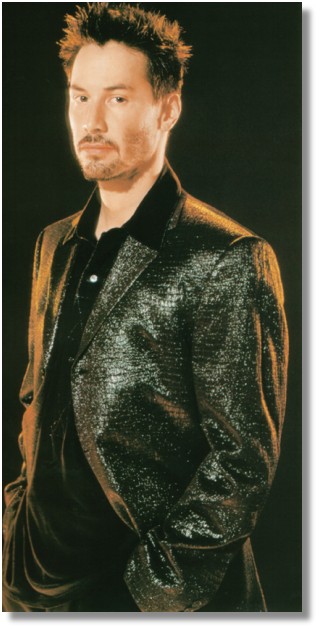 It's my wallpaper right now. *blows kisses to Elsinore*

Yeah, sorta Don John the High Roller; or Much Ado set in one of those casinos y'all have out there..

OK, looks Vegas to me, but I'm taking your word on it.

It's a great scan...damn near perfect!

Elsinore is a goddess! Beautiful!

i named this one krglitters, because he does, even more than usual here. loverly...

Well, he does look pissed off*...and that's how I looked in Vegas after losing my money. I'm much more of a shopper than a gambler. Gambling's fuuuuuuun when your winning, and sucketh when not. Ooooo, there was some DonJohn for ya, nudel!

ok dont bite my head off for 'gossiping' or for reading the TABS but i thought this would be a good topic to put in this lil article from one of those rag mags..... dunno how true it is but in THIS pic you posted he suure looks like he couldve easily MAN-handled this bully :D

Keanu Reeves suddenly went Neo on a beefy dude beating on a little guy at Hollywood's trendy The World club. Bully Boy kept busting his victim even after he'd fallen to the floor nearly unconscious, so Keanu -- fresh from "Matrix" martial arts school -- flicked a quick kick ... a jarring jab and ... WHOA! ... floored him. Bouncers kicked the creep to the curb, then called medics for the badly beaten little guy. He checked out okay, and told Keanu: "I really think you just saved my life!"

Hm... that has "instant urban legend" written all over it. But hey, you never know.

Dawni, I love that story. It sounds so made up. :D

Remember the one where he supposedly floored Woody Harrelson to prove to him that the actors had actually done the martial arts themselves in The Matrix? It was all in good fun of course.

Posted by: Zen on January 6, 2004 04:57 AM
What's on your mind?.....
(new here? please read this before commenting)
Remember, this is a fan site.
Keanu Reeves is in no way connnected to this website.
Please do not make a comment thinking he will read it.
Comments are for discussion with other fans.
Thank you.