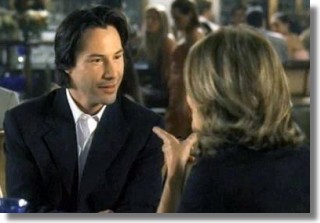 RottenTomatoes.com is a good one-stop shopping destination for movie reviews, including the latest on Something's Gotta Give, which is currently enjoying a nice freshness rating of 73%, and definitely more juicy tomato icons than splats.

But to hell with reviews, did you see it today? What did you think?
Not just of Keanu but the whole film?

I really went in expecting not to like it but was pleasantly suprised. It wasn't perfect but there were enough laugh-out-loud scenes in it to be worth the ticket. And I have to say again, that Diane Keaton is brilliant and hilarious.

And you already know how I feel about Keanu's performance.

oh. My. GOD!! i did love it, the whole thing, so tender and true and funny. and jeezus, Julian Mercer, where have you been all my life? he was so damn sexy, and so sensitive... and did i mention beautiful, and sexy? there was some definite spontaneous ovulation. the scene with the flowers, the way he walked into the doorway, just laid me out flat... i'll stop babbling now.

Wouldn't it be great, if a guy like that REALLY fell in love with the person and not the age.

I'm leaning towards speechless (still), but one part I LOVED is when he had finished reading her play and they kissed once and she hesitated and he commented about if they'd always have to go through that. Sounds like he was teaching her a few things. *swoon*.

Ah, MC, I love that scene, especially the squeal she gives after they run off. It's sort of set my mind on what would make me squeal like that....

No, the film isn't perfect, but it was funny and bright and one of the best times I've had at the movies in a long time. I've seen some great movies this year, but few had me walking out with a bounce and a wish that I was at some outdoor cafe with a girlie drink and a flirty guy.

And it's about 29 here tonight, so that cafe image took some doing!

Coherency? Not likely. Dr. Julian Mercer. So sexy. Gorgeous. Wonderful. Charming. Sensual. Can I have one? Just GAHHHH.

I actually saw the movie last weekend on it's sneak preview--the movie theatre parking lot was essentially empty for an AMC 24 because of the snowstorm, but the one theatre showing SGG was packed. I loved it and really wanna see it again tonight with a few of my friends (last week I went with my family but I wanna have a girl's outing tonight:D).
The film was really great, very pleasing and the chemistry between all of the actors and the person they fell for in the film just worked beautifully. As everyone has been saying, Keanu did look really good in the film, and of course so did Diane Keaton. The acting, setting, story- all perfect, with the exception of some camera work. (You could tell it wasn't Bill Pope cinematography lol:D) Altogether such a great movie-worth anyone's time!

Just saw it last night. My gosh, he is so beautiful. I loved how he kept teaching her how to kiss him and how he just had this great presence throughout the film. The first time he came onscreen, all of the women in my row simultaneously went "Awww..." like they were breathing a sigh of relief or something! lol Anyway, great movie overall, Jack and Diane are just wonderful (Jack: "I'm walking around the house now!") after he saw her naked and just everything! I am recommending it to everyone I know!

Reeves Drive has posted Ray Pride's article about SGG over on Movie City News which has the following quote from Nancy Meyers:
"Keanu was a real fantasy," Meyers says of her casting. "When I was writing, I had pictures of Jack and Diane all around my computer and sometimes when I would write the scenes that the doctor was in, I'd go on line, go to people's websites, I'd look at John Cusack or Keanu, then I got into this Keanu Reeves thing. Y'know, he started in comedy, it would be so great to see someone do something they haven't done in a long time. I had dinner with him last night? He's hilarious."

GO ON TO PEOPLE'S WEBSITES...!? Got into this Keanu Reeves thing? Heh, krix you may be responsible for the Dr. Mercer we now know and love...

And I'm soooo glad she didn't go with John Cusack. Since I'm one of the few people on this planet who just doesn't get the John Cusack-love.

And here again is how rumors start:

From an interview with Diane Keaton:

"[about Keanu] But he's so beautiful, it's stupefying. It was a guilty pleasure. A very guilty pleasure." and [during auditions for her 1983 drama "Mrs. Soffel," co-starring Mel Gibson.] "I was in my upper 30s, and Tom Cruise, Kevin Costner, all these young guys tried out for a role," she recalls. "The worst was literally touching Tom Cruise. Honest to God, his chest was like a rock, like a tree trunk - there was no softness."

Alas, her two statements have been conflated to this on zap2it.com:

She explains, "Jack's right for me, you know what I mean? It fits. I felt weird kissing Keanu because he's too beautiful. He makes you feel strange. It's like you're touching a rock. He's so toned," according to London's Channel 4.

Argh. Of course, it's possible that she did say the above in some interview...

Well, I'd like to thank Nancy Meyers specifically for the shots of him with just the blue sky background (as he's tending to jack in the parking lot).

Those were definitely just for *us*

On the other thing, yeah, 'rock' was taken out of context at the very least.

Krix, I think there were a couple of other shots of our boy just for *us*:

Three or four of the close-ups of Keanu in Paris at the restaurant...with his face turned just so and his hair... Gosh, I could just kiss him to death.

And the scene when he serves all the women tea... he talks about green tea not making you crazy... He looks so so good there, too.

Did anyone else notice that at the Paris restaurant scene..after Jack goes over to kiss Keaton, she says: "whoa"? I thought that was cute..And Jack says excellent one time too, I think.

Someone had said you could tell Bill Pope did not do the lighting...that's for sure!! One thing I didn't like was that sometimes there were too many filters being used and you couldn't really see Keanu that well. Also.. it seemed that when Keanu was in a two-shot with Jack or Diane.. Keanu was out of focus... like the director didn't want the audience's eyes just going to Keanu! And then there were too many shots of the back of him...

Did anyone else think he dyed his hair black for this role? And didn't his hands look so well scrubbed? I've never seen him so clean!! Ah.. the doctor in him. Did he get buff for this role? His upper arms were quite large and his chest looked pretty broad and sturdy.. Like Superman in that blue t-shirt and flowers in his hands.

Lori, I agree with you... the way Keanu walked in with those flowers.. infact, the way he turned and stepped was very interesting.. when we first see him in the movie he does a weird turn to get a chart or look at a nurse.

Time to see this film again.. It's a great holiday gift to all of us. Thankfully, John Cusak did not get this role. He is not that attractive to me..and he looks too old for the role anyway.

What was the name of the restaurant in Paris? I am going over there for X-mas, and would like to surprise my wife...

Awww! Brian, that's sooooo romantic. I can't recall but I'll bet someone else can.

Posted by: van nynatten on March 3, 2004 04:17 AM
What's on your mind?.....
(new here? please read this before commenting)
Remember, this is a fan site.
Keanu Reeves is in no way connnected to this website.
Please do not make a comment thinking he will read it.
Comments are for discussion with other fans.
Thank you.