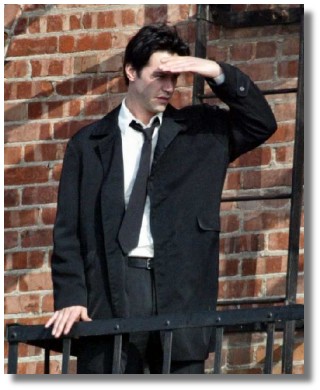 E! Online gets inside the "Constantine" set, and has a great deal to say. Entertainment gossip Anderson Jones said, "Who isn't speaking of Hounsou this awards season? He joins Shia LaBeouf, Tilda Swinton and Keanu Reeves in 'Constantine,' which may well be Reeves' last picture ["oh, bullshit"--krix]. Why? Because by the time the supernatural thriller hits theaters next year, Reeves could have pocketed as much as $300 million (in salary and points) from his work on the 'Matrix' trilogy. But money isn't everything. ["exactly, he doesn't act for the money"--krix]
Word from the set, whispered by the special effects department, headed by Stan Winston, says the team has outdone itself. I think someone told me, 'These things kick ass!' or something to that effect. Apparently, first-time director Francis Lawrence gave the 'Constantine' team complete freedom in bringing the nasty characters of the dark comic book 'Hellblazer' to life, and they pushed the envelope at every turn. Even Winston people think this is some of their best and most frightening work in years. I hear they're particularly proud of the devil's son, one of many creatures in Reeves' hell -- but if I say any more, I'll need to be reanimated myself!"

Didn't he say on the Today show for the Matrix 3 promotion that he wanted to do a play once Constantine has wrapped?

I don't see him quitting acting at all, but maybe taking a bit of a breather from the movie aspect for a little while. It remains to be seen if Tripoli comes together or not, but in the meantime he can do whatever he darn well pleases. :)

Yeah, I thought this sounded a little suspect myself, still trotting out that old gossip about him not working. And the effects? How far can they go in a PG-13 film?

Of course, he doesn't *have* to make any more movies. Financially, he hasn't for a while now, though. I'd love to see him do some stagework or something, or even just take a break, play with the band, whatever. But that's a hell of a thing for the article author to just throw out there just to make the point of the amount of money he's made and I don't think that Keanu's "last picture" is coming anytime soon.

That's how rumors get started.

These people just can't get over how much money he's making, and seem to resent it. I think it's a shame that this part of the business is public knowledge. How many other professions (other than sports) publicize their salaries every time they do something new?

"Oh, I'm a navel fuzz inspector - I just got promoted from toe punk checker. I make 8 million dollars an hour."

Ok, we need internet shorthand ala "LOL" for the kind of laughter when you are sitting there silent and shaking with your mouth frozen in a grimace making that tiny breathy squeak because CHIANTI IS TOO FUCKING FUNNY.

Wonder how this rumour got started.

Something like this doesn't usually get started in a vacuum.

Altho' that may be where the gerbil was.

How? Exactly like this. I believe that much entertainment news DOES start in a vacuum, or at least in some other unsavory motive-driven sucky way. A tabloid (or the like) posts a story with the magic "may" as in 'Keanu may be giving up show business in order to...blah blah blah' and assorted other outlets pick it up and spread it. And then even though he FULL-ON refuted that this had any truth at all in recent interviews, some other source peppers their article with it as an attention-grabber/point-maker/nipple-twister. And then some people, in order to feed speculation, choose to believe second or third hand conjecture rather than the words out of the man's mouth.

Posted by: krix on December 12, 2003 04:30 PM
What's on your mind?.....
(new here? please read this before commenting)
Remember, this is a fan site.
Keanu Reeves is in no way connnected to this website.
Please do not make a comment thinking he will read it.
Comments are for discussion with other fans.
Thank you.