OK, so there's another chance for good hearted fun with photographic proof today.
The Orlando Jones show also tapes by jozjozjoz. Well, technically it tapes close to her car.
We have no idea what time, though. So we need either:

a) someone to comment that knows what time the show starts taping.
Our operatives report that taping begins at 5 pm.
or
b) a smackload of excuses for why Joz needs to keep going out to her car instead of working. (She's already confessed to accidentally -shyeah, right--leaving her phone in the car)

--now that we know the time, it's pretty much in the hands of the Architect.

I told her she should trust in the plan of the Matrix, and make one trip out to the car today, with the camera and "Hi Krix" sign (which shall also include jozjozjoz.com...it's like sponsorship!) and if he doesn't cross her path it wasn't meant to be. It couldn't have happened any other way.

Of course, she's all "free will blah blah blah, in charge of my own destinycakes", so who knows.

Update:
Oooh! Here's a pic of the lot with something that is either a signpost or some guy doing an impression of Munch's The Scream. It's not Keanu, though. 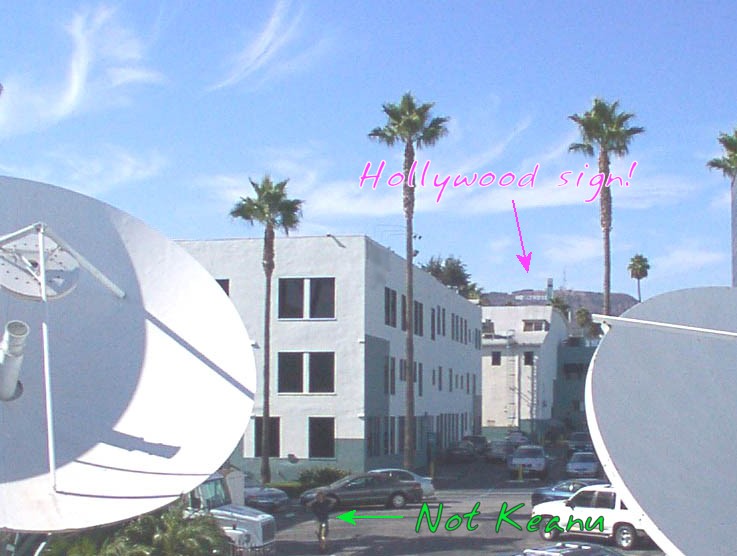 BUT, Keanu just might be in the building under where the Hollywood sign is right now. How very exciting!

In any case, I *heart* jozjozjoz for even bothering to try, and for keeping me updated on IM all day. At this point she could send a a pic of Orlando Jones' Security guy holding the sign and I'd be a happy camper.

And for the record, joz works around famous people all the time, is friends with some of them and I trust her not to be weird or pushy or anything about approaching Keanu. We've discussed it.
:)

I agree with you Kriz, Jozx3 should just sense when to go out to her car, if it's meant to be. Bu if she wants to be more practical about it - my take on the time is that these late night types film around fourish. Maybe she could fake an illness and pretend to go home early or something. Does OJ's site where you buy tickets mention what time the shows are taped?

I don't think it mentions it on the site. It probably says on the actual tickets.
Fourish sounds like a good guesstimate.

I think fourish is good - they have to get there and set up, right?

Oh golly, this is exciting! Wheeeeee!
But Joz, if you do meet him: Could you please check what he smells like? It's a long-time scientific research project of mine ;-)

Ehm... That is, if sniffing at him isn't considered offensive, of course :-D Good luck!!!!

Yay, we have confirmation of the taping time, thanks.

Cool... I'm an Operative! (actually I got the info from the beckyband email that everybody gets, but I do have a secret bra-cam I have plans for someday.)

Maybe she can give him some brown electrical tape to match those shoes. sheeesh, this man needs a woman. Go to Club Keanu for the link 'o the day to see what our little mess-cat has been up to. ;)

I keep checking back to see if she's been successful. What fun! Good luck!!

Chi, I knew those hush puppy things were useless, bring back The Boots.

I will confess that my favorite pair of Chucks were about 51% duct tape by the time they were finally retired.

My 15 minute trip out around the lot on my break:

Went out to my car, got my phone, checked the 6 voicemails that were left on my phone since Sunday (lesson: never leave voicemails for Joz if it's urgent), made multiple phone calls.

Saw Orlando Jones, the motorcycle stunt people who are filming tonight, and lots of crew folks...

No Keanu (or anyone from Becky) that I recognized... I leave work at 6pm... another chance then...

I'm with you on the bringing back of the boots k. I loved the boots. Oh! and hope you get lucky today. :)

Well, Keanu missed out on meeting Joz and saying hi to me. Maybe he'll get lucky next time. She is going to send me some pictures from the scene though.

Very funny
thanks u made my day
***Danielle***
chrisdaniellelovebird@yahoo.com

Posted by: ***Danielle*** on October 20, 2003 01:56 PM
What's on your mind?.....
(new here? please read this before commenting)
Remember, this is a fan site.
Keanu Reeves is in no way connnected to this website.
Please do not make a comment thinking he will read it.
Comments are for discussion with other fans.
Thank you.