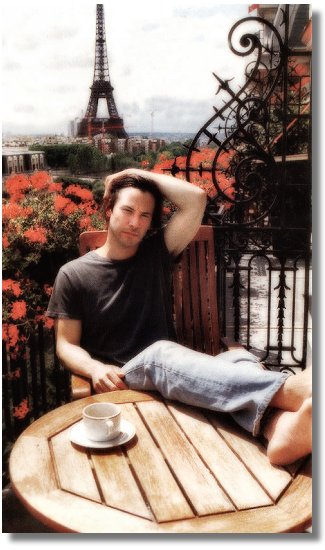 Keanu in Paris, published recently in US magazine.

Isn't it just beautiful? I'm so afraid to fly, but I would board in an instant if I knew that was waiting for me.

Thanks everso for enlarging so beautifully. One very small wish is that there is one of this without his toedies cropped out. Damn! He looks edible.

Really busy with work these days, but I check Keanu every day.

To quote your audioblog after the becky show, "I'm done for, I'm done for!" with this Paris pic...

Oooh la la indeed! :) Why is it when I see that pic I think of, what's that song?? Voulez vous couche (sp?) avec moi c'est soir? (Sorry for the butchered French). Sigh.

Haven't you flown before??

I'm sure we all love Keanu in those jeans and in Paris no less, but I believe the real question is: Who took *that* picture? A new French dame? Or new 'associate'?

On a sort-of related Paris note, I have heard that they finally gave a title to the Untitled Nancy Myer's movie -- Something's Gotta Give. Not that great of a title...

I have flown, but only once in the past 15 or so years, and I had to be completely hammered and on pills.

Renee, maybe someone can find a photo credit in the magazine. It looks like something that was done by a professional, perhaps he gave an interview to the French press when he was there.

How highly imaginative (the movie title)! It's only been used once before: Marilyn Monroe's last - unfinished - movie bore the same title!

oh wow, niobe.
I definitely hope they go with another title now.

Now, that's what I call a breakfast nook...Good Goddess. He really oughta be listed under Controlled Substances. I know I'm wasted - oy.
Thanks for the lovely treat, Krix dahling, and sorry I missed you last week.

so taken aback when I saw this pic during a newsstand scan,
checking the photog's handle was the *last* thing to cross my mind!

I'll try to be more focused next time, but no promises *LOL*!

Oh dear God - he is so beautiful it's painful. Our guy is putting on some weight - those are some sexy pounds.

Phoenix, don't beat yourself up too much. I'm not sure that a photographer(credit) is listed, but maybe I read it too quickly (or was shocked by the beauty of it all) to notice. I think I did quickly glance to see who the photog was, but didn't see a name. Or maybe I just missed it as well. It's possible. :)

~L found the photo credit. It was taken by Willy Rizzo / SIPA press. Mr. Rizzo seems to be a longtime european celebrity photographer and has shot Salvidor Dali and Marilyn Monroe.

Oooo! If Mr. Rizzo took that picture, then there HAVE to be more from the session. :) Maybe they're for the magazines that will come out for Revolutions?

I just love your site, thanks for all the time you put into it.

I'm with Chianti - why do they have to crop out his lovely feet.

this man lacks absolutely NOTHING !

I wish they made a movie called "Keanu in Paris" - these three words alone make me shiver and make me act stupid.

the man is just a beautifully macho specimen!
Simply glad I can appreciate his persona herein
and in the creative arenas of stage and screen I do so cherish!
:)

Why was mine eraised, I'm sorry it's ok. Talk to you another time:)

Posted by: ***Danielle*** on November 1, 2003 02:06 PM
What's on your mind?.....
(new here? please read this before commenting)
Remember, this is a fan site.
Keanu Reeves is in no way connnected to this website.
Please do not make a comment thinking he will read it.
Comments are for discussion with other fans.
Thank you.