baby's got a brand new doll 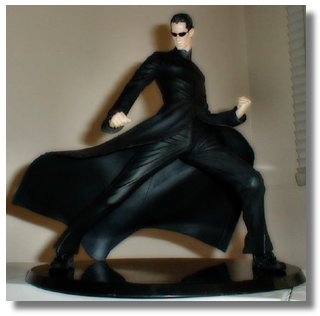 He's tall and lithe and very sexy. I knew I wanted a new figure from Reloaded, but couldn't really decide. When I saw the finished version of this one I fell in love with it, even though I snarked on the prototype in this entry.
Reloaded Neo was sculpted by Shunji Hagii, and has no movable parts. He was procured from victorshop.com. You can check his auctions (there was another available at the time of posting).

The boys aren't taking it like The One, at all.

Dojo is beside himself and sighs loudly between sobs.
Lobby is simply PISSED and offers little or no consolation. 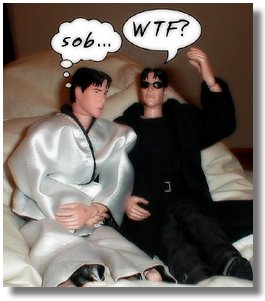 I tried to call Lobby out on the fact that "This is Bullshit!" is actually a Reloaded line, but he just gave me the finger and stomped back to the stereo, put on some TOOL and ignored me for the rest of the evening.

Hopefully at some point they will learn to live together in harmony.

Load both the pages up and alternate between them.

next time someone tells me i have a problem, i'm going to refer them to this post. hillarious. i need to get my hands on that new one.

*snicker* They need to learn to play nicely.

Can't we all just get along? :) Another great entry Krix! ROTFLMAO!

hee! You're too funny, girl.

Personally, I think they are jealous because now they will have to share you with another ONE. Just make sure you give them lots of love and attention until they adjust. Tell them you are not picking children, you love each of them differently.

BTW: I am jealous too... I am still waiting for my Neo to come in the mail.

hilarious! *megasmiles* and a giggle or two!

Ok call me a loon, but did anyone else check out the huge crouch on the neo doll, I hope that it is a accurate depection...ok eveyone can start the booing and hissing now..loll

I LOVE the wee-Neos adventures! Hadn't seen them in a while.

Posted by: Zen on August 10, 2003 05:51 PM
What's on your mind?.....
(new here? please read this before commenting)
Remember, this is a fan site.
Keanu Reeves is in no way connnected to this website.
Please do not make a comment thinking he will read it.
Comments are for discussion with other fans.
Thank you.