Keanu in training is PERFECT for today's AF. 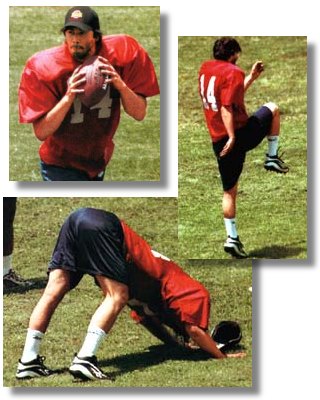 In an effort to make Ass Friday enlightening and educational in addition to being arousing, here's an excerpt of an interview that Keanu did for The Replacements promotion where he talks about training for (god's gift to Ass Friday) Shane Falco....


The cast and crew, not to mention some pro players who worked on the film, were very impressed with the way you perfected your throwing technique. Are you ready for Monday Night Football?

No way. But I knew if you didn't believe me as a quarterback, then you wouldn't be able to enjoy the film.

You pumped up for the part, didn't you?

I gained about 23 pounds through changing my diet and lifting weights. I'm six-foot-one, and I ended up weighing about 192 pounds, so I think I sort of had the body of a quarterback.

Are you a fan of the NFL?

I am. I grew up watching football, even though I never played it as a kid. I was into ice hockey. I always wanted to play for Canada and be an Olympic goalie. But I love the game of football. Actually, I watched a lot of NFL game films and video compilations to get ready for my role.

Was there a moment when you felt like a real pro?

When I walked to the line of scrimmage, I found myself doing that helmet thing where you kind of give it a little smack. And then when you're calling signals, you suddenly find you have this quarterback voice. Actually, there was a time when I finally felt I was being accepted as a quarterback by the men around me. When I first started to pass, I'd throw the ball and miss, and the guys would go, "Good try, man. You'll get it." Then, about a month down the road, we did a scene where I threw a pass way behind the receiver. I did it three times and just missed every time. Suddenly, I realized I wasn't hearing, "Yo, man, it's okay." In fact, no one talked to me at all. I came off the field and said to the guy who was coaching me, "What's going on? What did I do?" He said, "Nobody's talking to you because you didn't make the pass. You should take that as a sign of respect. They're treating you like a quarterback. That's what happens when you come off the field and you don't execute. No one talks to you."

Did that help you understand the pressure your character was feeling?

Yeah. It was a cool lesson, because I realized the responsibility that rests on a team leader like Falco. If the quarterback doesn't execute, the guys don't win, and it could have a big effect on the team's future. You feel the weight of becoming the guy who can make [the team] a winner or a loser.

Was everybody faking the tackles, or was there some real pain out there?

I now have such respect for the sacrifice guys make to play that game. Just even in our film, where we're acting, some guys got broken bones. I'd end up sitting in an ice tub for half an hour. Ice was my friend.

Did you ever get seriously injured?

Not really. Everyone around me was great about protecting me. I remember one player, JC, said, "Okay, man, when I tackle you, don't tuck the ball against your chest." And I'm like, "Why?" And he goes, "Because I'm going to drive you into the ground, and the ball will break your ribs."

Happy 4th of July to all my red, white and blue homies and Happy Ass Friday to everyone!

Love ya Krix. Have yourself an asskickin' Fourth. (Isn't it great it fell on Ass Friday? :))

Yep, I might just indulge my day off by appreciating that great american hero, Shane Falco, on DVD today.

that was cool and hot to look at. :) thanks and have a great 4th girl!!

Any reasons terrific to see Shane Falcon in action.
Hes a great pick for the AssFriday and 4th of July focus.
Go Falco!
Wishing everybody a great 4th and a super day!

I meant to say Falco not Falcon...I really must have football on the brain.

I saw Reloaded at the IMAX yesterday! I was thinking "Wouldn't that be great if that were Shane Falco in 6 storey high in front of me" [coz, ya know, the Replacements wasn't shown at the cinema here :(].

Posted by: Keanuette on July 5, 2003 05:06 AM
What's on your mind?.....
(new here? please read this before commenting)
Remember, this is a fan site.
Keanu Reeves is in no way connnected to this website.
Please do not make a comment thinking he will read it.
Comments are for discussion with other fans.
Thank you.