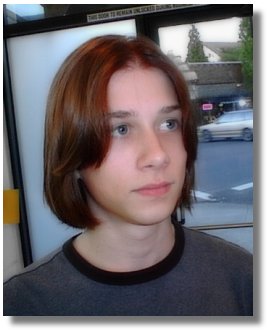 I do hereby declare Lou Taylor Pucci to be the Cutest. Thing. Ever.
And I'm pretty sure he's on the verge of becoming a very big star.
Looking again at the casting for Thumbsucker, Lou has the lead as Justin Cobb, Vincent D'Onofrio will play his father, Tilda Swinton as his mother, Keanu as his unconventional orthodontist of course....and now I see according to Lou's news page that Matthew McConaughey is out as Mr. Geary, the debate coach, and Vince Vaughn is in. Vince freaking Vaughn, hot damn. I luff him.

And speaking of casting, congrats to Chase Offerle, a Beaverton! local who now has the part of Joel, Justin's younger brother. According to this article Chase has two scenes with Keanu. His mother must be so proud.

According to this Portland Tribune article on Lou : Thumbs up to a juicy role, the budget for the film is a mere 3 million dollars, which could mean the script must be very good to be getting the cast it has. I hoped that Keanu would do a film like this after he finished the Matrix movies. Of his three upcoming films, as of right now, I'm looking forward to Thumbsucker the most.

Of course, if I hear that Keanu goes blonde for Constantine(which I seriously doubt, but still secretly hope for), that all goes right out the window.

oh my GOD! Vince Vaughn is *SO* much better than Matthew McConaughey! woo hoo! much potential here, indeed. as for the whole Constantine, blonde-keanu thing, all i can say is, you're just *sick*, girl, *SICK*... ;)

Yesh Lou is a cutie pie.

I'm looking more forward to seeing Keanu on stage and it doesn't have to be Shakespeare.

an ever-appreciative thanks for all updates...!

You know what would be way cool -- if Keanu did Vince O's show, Law and Order, CI

Ke on Law & Order, CI? That would be major motivation to check out that very good show.

TV work is not out of the question. We need more KeanuTV

LOU IS THE GREATEST... AND I CANT BELIEVE HE IS SO AWESOME. FROM YOUR FRIENDS IN NJ, WE WISH YOU GOOD LUCK!

Lou is, by far, the most talented kid I've ever known & had the honor of acting with. Best of luck man.

Remember, we all get fistfuls of cash when you get back!

HI guys, just so you know, if you're leaving messages for LOU, you want to go to his website at:

and sign his guest book. He probably doesn't know this site even exists and won't get any messages here.

Dude Chase Offerle is a butt wang and i know him!!!!!

Hey, would one of you guys that knows him ask him to stop by and leave a comment or email the site and let us know how it was to work with Keanu and when the heck this movie is coming out???

ya! Ill be sure to tell him that. Ill talk to him

My best friend and I go to school with Chase Offerle. He is super hot and so nice. He is really down to earth. I will let Chase know about this website and ask him to post something.

Thanks Billy and Renee :) You guys rock.

Hi.... Okay I am Mackenzie and u no my best friend Amos R. Well.. Amos wants u to meet me sometime i hope that will happen sometime!

Thanks for coming by, Chase!
We're looking forward to watching your work when the movie comes out!

Chase you made me cry...

Posted by: olha on March 22, 2004 09:32 AM
What's on your mind?.....
(new here? please read this before commenting)
Remember, this is a fan site.
Keanu Reeves is in no way connnected to this website.
Please do not make a comment thinking he will read it.
Comments are for discussion with other fans.
Thank you.