This is some sort of trading-type card that I came across on eBay...no, I didn't buy it. 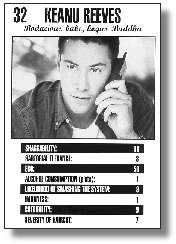 I can't make any sense of the ratings system on this, and yes, I had to look up sartorial.

That article below is a humor piece that can be found on the back page of this month's issue of WIRED magazine (thanks to "t"):


"FOUND: Artifacts from the Future"
~by Thomas Goetz

Keanu Reeves, an actor once revered for his gift of nuance and a director who helped usher in 4-D film, was reborn yesterday at Cedars-Sinai Medport in Los Angeles Metroplex. Doctors said Reeves will be rapid-raised to 31 years of age, and allotted the customary 15-month Celebrity Lifespan. After era orientation, he will star in the remake of "Johnny Mnemonic", planned for Imax release next spring.

Now scarcely remembered outside film-studies learning networks and 2-D revival houses, Reeves was one of the leading actors and filmmakers of the late 20th and early 21st centuries. In "Little Buddha" and "Bill & Ted's Excellent Adventure", he played on anxieties of the day like enlightenment and time travel. His role in "Point Break", though overlooked at the time, is cited by historians for its portrayal of pre-secessionary Californian culture. And in the three prescient "Matrix" trilogies, Reeves portrayed Neo, a messianic hero who battled a malevolent artificial intelligence - a scenario that eerily foreshadowed the failed AI Uprising of 2033.

In the final film of the nine-part series, Neo is revealed as an artificial agent himself: the plot twist incited the General Strike of 2013, which shut down the tri-nation area for four months. After three years in seclusion, Reeves returned with the epic "Life of Geffen", winning Academy Awards in 2017 for Best Audience-Participation Segment and Best Cross-Platform Marketing Campaign.

In March 2025, whiles Reeves was directing the sequel to "A Man Called Biffy", his first Best Picture winner, he suffered a fatal cloud-surfing accident. "A Woman Called Buffy" was released posthumously and also won a Best Picture Oscar; the film now stands alongside David Fincher's "Cinetubbies" and Ang Lee's "Dolemite" as a classic of '20s experimental 4-D cinema.

That was just too damn funny!

Posted by: Keanuette on October 25, 2002 11:36 AM
What's on your mind?.....
(new here? please read this before commenting)
Remember, this is a fan site.
Keanu Reeves is in no way connnected to this website.
Please do not make a comment thinking he will read it.
Comments are for discussion with other fans.
Thank you.