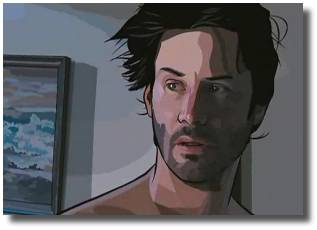 February 26, 2006 - Go to enough comic book conventions and you are likely to see a cool sneak peek or two. The surprise of today's New York Comic-Con came from Warner Independent Pictures, who decided to showcase the first thirty minutes of the futuristic A Scanner Darkly to a crowd of lucky show-goers.

Audiences recently got a better idea of what the Richard Linklater film is about when the long form trailer hit the Internet a few weeks back, but the extended viewing we got at the con afforded us a closer look at the amazing interpolated rotoscope animation style and shed light on more of the story elements.

For those who have not yet heard of the project, A Scanner Darkly is based on the sci-fi novel by Hollywood favorite Philip K. Dick, whose works have been adapted into Minority Report, Blade Runner and Total Recall. This is perhaps the most faithful of a Dick story yet, and its rights were acquired at a discount because the filmmakers promised to remain true to the tale's original intent.

Set seven years in the future, the government is losing the war on drugs, and a quarter of the population has fallen prey to a drug known as Substance D. "Either you're on it, or you haven't tried it," remarks Robert Downey Jr.'s character early in the film.

The story tracks an undercover cop and his relationship with his friends, several of whom are mixed up in the mire of drugs. Every relationship and transaction is tracked by the government with advanced surveillance equipment, and only a single powerful corporation goes unchecked. That is the basic outline of what goes on… If you want to fully preserve the sanctity of the viewing experience, you may want to stop reading here, as we are about to delve deeper into the first 30 minutes, and as such, MILD SPOILERS FOLLOW.

Are you sure you want to click below to read the spoileriffic rest of the article?

In the thirty minutes we saw, the most overwhelming feeling the movie creates is a sense of crushing paranoia. The animation oozes and slinks around, casting an eerie sheen on the proceedings. The film opens with a crazy-making drug sequence where one of the (allegedly) addicted characters claws at his body, feeling he is being attacked by giant aphids. That scene sets the tone for the claustrophobic and desperate film, but what ices the sense of paranoia is the technology known as a "scramble suit," a sort of camouflage which cycles through millions of random body parts, completely obscuring its wearer. The film invites us inside the suit, where we see the world from the perspective of the main character, played by sci-fi vet Keanu Reeves.

Upping the paranoia ante further is the Big Brother approach to "scanning." The society portrayed employs an almost 1:1 ratio of watchers to citizens, and complete surveillance of everyone's movements. One sequence shows the central network of tracking systems as they hone in on multiple targets, finally settling on their intended victim, who is merely walking down the street. The information collection is apparent in every scene, with distorted views, record light indicators, security camera angles and recorded audio effects tipping off the spying. The ultimate payoff of this attention to the omnipresent nature of civilian surveillance is a sense of repression and dread.

These science-fiction elements really lend themselves to the animated style, which is created by a program that is a proprietary blend of Flash and Illustrator. Linklater used almost the same technology to make his philosophical ponder-fest Waking Life. Tweaks have been made to the software, including a warp function to provide depth of field, lending Darkly much more dimension than Waking Life enjoyed.

From the first glimpse, the performances seem solid and nuanced, and it's easy to see why actors would want to be associated with this production. Robert Downey Jr. especially stands out as a neurotic, shifty and hilarious schemer. Overall, the film is much funnier than it comes across in the trailer, and the paranoia is played as much for laughs as thrills.

If the rest of the film is as intriguing and affecting as the first thirty minutes, audiences should be in for a mind-blowing head-trip into the future. Stay tuned to IGN FilmForce for more updates as the film gets closer to release.

Go to IGN's coverage of A Scanner Darkly

I am cracking up at your ASD avatar...July2006 (maybe)Did you do that yourself or did they give it to you?

I made it with from a clip from the old trailer :)

Posted by: krix on March 1, 2006 12:02 PM
What's on your mind?.....
(new here? please read this before commenting)
Remember, this is a fan site.
Keanu Reeves is in no way connnected to this website.
Please do not make a comment thinking he will read it.
Comments are for discussion with other fans.
Thank you.