well, look at that 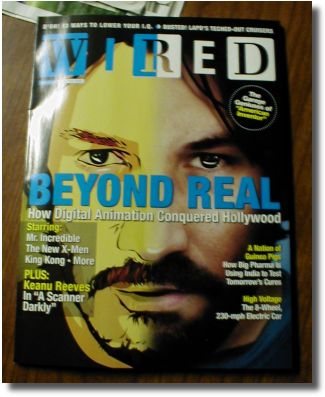 When I got home, The Wired mag was there.

Alas, I have no scanner so here's a photo of the cover.

And because I'm extremely guilt-ridden by the lack of attention I give to the blog these days, I'm going to pay penance by TYPING SHIT UP BY HAND.
Or at least as much of it as I can...

There's actually several related articles, I'll do the one about A Scanner Darkly in a bit, errr, tomorrow if no one else has got it d'oh, KeanuWeb has it right here, for now - here's an extra feature called "10 reasons Keanu RULES":

1. HE'S THE FACE OF GLOBALIZATION - Born in Beirut to an English Mother and a father of Chinese and Hawaiian decent, he's a citizen of the world. And unlike the multiracial Vin Diesel, he saves the universe with his geekiness, not mere muscle.

2. HE'S NOW HOLLYWOOD'S SCI-FI GUY - He was the first actor to bring William Gibson's work to the screen with Johnny Mnemonic. When Ewan McGregor and Will Smith turned down the part of Neo, Reeves jumped at the chance to enter the Matrix.

3. HE MADE A TRILOGY THAT BEATS THE STAR WARS PREQUELS - Reeves said of the original Matrix, "It's got the kind of mythical figures that make a classic: the hero, the wise man, the warriors, the guides, the prophesy, the oracle, and the messiah." All that and no Jar-Jar.

4. HE'S AN EARLY ADOPTER - His former band Dogstar released an enhanced CD way back in 1996, when the only "dual disc" was a double-sided vinyl LP.

5. HE LOVES A WELL-BUILT MACHINE - Despite his inner Buddha, Reeves covets Norton motorcycles. We'd like to see the Wachowski Brothers direct him in a big-screen version of Zen and The Art of Motorcycle Maintenance.

6. HE REVERES THE F/X GUYS - Reeves gave millions of his backend earnings from the Matrix sequels to the movies' costume and special effects teams.

7. HE ENJOYS A GOOD GRAPHIC NOVEL - Reeves is a huge fan of Frank Miller, creator of The Dark Knight Returns and Sin City. He also starred in Constantine, the big-screen adaptation of the creepy comic book Hellblazer, and he's been mentioned as a possible lead in the Silver Surfer film.

8. HE'S HIPPER THAN A JAPANESE SCHOOLGIRL - Reeves the fanboy has an impressive record for spotting what's next in everything from music (Architecture in Helsinki) to movies (director Mike Mills).

9. HE'S A VIDEOGAME THESPIAN - He didn't just participate in the anime crossover The Animatrix; he was also game enough to shoot extensive motion capture for Atari's Enter the Matrix.

10. HE'S SMART. NO, REALLY. - Reeves has called himself a "meathead" but Matrix producer Joel Silver insists he's "very well read, very conscious of the world, politics, the economy." He can talk about the difeerences between the theories of Schopenhauer, Hegel, and Kant. And he's even a crack chess player. Hey maybe he is The One.

...and of course, Club-Keanu already had this feature.

hello,today i thought to you and i have find the natural method who is my mission.i have the solution only today.
1)the meadow queen,it s a plant for gap vessel,she have an acid for regenerate,.you can find it in france
2)the snow to drink,for his gas.
3)oil of grapfruit for his regenerate

as a rather witty bumper sticker i saw the other day said: Wtf? (regarding the previous comment, of course, not k's lovely self-punishment...)

hi ,i hope live a long time with this:
seed of sesam for division cellular and regenerate of tissue,there s l carnitine inside.bye.

i don´t need "10 reasons Keanu RULES" , it´s enought him be himself *wink*

off topics -christelle, did you missed? or i missed understanding?

hi, iforget for emphyseme ,it s oil of cypress of doctor valnet in pharmacy in france.sorry

Posted by: christelle on February 25, 2006 05:56 AM
What's on your mind?.....
(new here? please read this before commenting)
Remember, this is a fan site.
Keanu Reeves is in no way connnected to this website.
Please do not make a comment thinking he will read it.
Comments are for discussion with other fans.
Thank you.