Yeah, I've got some catching up to do 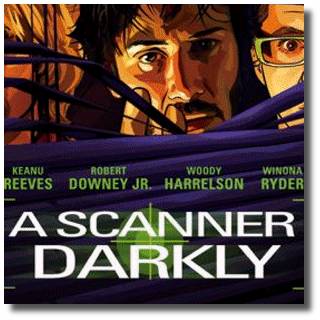 Here's a look at the poster for A Scanner Darkly, and Warner Brothers also has released a new trailer as well (direct link to quicktime file).

I love, love the paraniod look of the windowblinds.

Coming to a newsstand near you, Keanu will be featured on the cover of March's issue of WIRED Magazine, (which V. has a subscription to so I'll be checking the mailbox) and will also be interviewed by Michael Fleming in April's PLAYBOY, which someone will have to go to another part of town and buy... *cough* [dons sunglasses], 'cause ya know....smut.

Today, referencing that Wired article, AICN reports that Reeves is possibly being considered for another comic-based role, this time it's Marvel's Silver Surfer, and 'tis merely a rumor at this point.

More confirmy is that Keanu will be presenting at the Oscars this year, and is said to be attending The Independent Spirit Awards the night before, or at least the party.

And what's been going on with me?

Well, The Vibemerchants went to a pro studio and recorded a couple of songs so we could enter a contest to open for....Bon Jovi! Which is hilarious but sort of appropriate since Bon Jovi was the biggest name that a little band called Dogstar was ever on the bill with, I believe.

And last but definitely not least, February 14 was a very special "V." day....I got engaged.

Recording studio? Bon Jovi? OMG this is so exciting!
I can't wait for the day when I can say, very casually: "Yeah, I know the bass player from the Vibemerchants, we're like this" *crosses fingers*

I've been dancing around for a damn week, waiting for you to announce that, woman. Can I eeeee! some more? hee. Congratulations. You guys will be very happy, I feel it. :)

Now, I have to head over and download those tunes.

Dude, I either just lost my comment or I didn't comment, but I totally remember going all "eeeee!" on you again just two seconds ago. :) Seriously. Congratulations. I am so happy for you two.

(FYI--my first comment was way more profound than this comment, I think. Well, probably not, but I'm totally planning to pretend it was. Yes. Yes, it was profound. The angels would have wept over it. hee. Unless you're previewing comments, because then, you'll know it was probably just as lame as this one. ha!) Where was I? Oh! I kees you. *mwah*

ah, the announcement. good medicine, krix and V. as excited as i am about the news of your engagement, i'm still more aflutter to think of seeing keanu present at the Oscars. it's been a long dry spell.

smooches and hearts and all that jazzy stuff...

Great news all around! Congratulations to you and V!

And I see voting starts March 3rd for the contest. You can count on your ke-pals to vote as many times as we can for you guys! Just had a listen to the songs and they are awesome, dudette!

I'm so glad you finally revealed your little secret to all so I too can make public my private chorus of Squeeeee! Reeves really missed his chance... (i.e. "Hi" under "Non-Heinous")

you said yes and i´ve nothing to say more. V. is the one!

Oh most triumphant! (much happiness to you and V.!)

I've been screaming WEEEEEE for you two over and over again!!! So very happy for you and congratulations again, krix!!! And it's great to see you blogging! And best best best of luck to you and Vibemerchants!!

I've nothing much to add to what the previous posters have said but I do it nonetheless:
again my most heartfelt congratulations,
all the best for the two of you, I'm so happy that you found each other...

...and on a totally unrelated note: Vibemerchants and Bon Jovi? Wheeee! \m/ I'm so there, even if I can't be there!

Krix, big congratulations for you and V for the engagement. Hope you are blessed with so much happyness, love and peace in your life. :)

wheeee!! the news is out! (or it was out a couple of days ago...) Sorry I'm lagging behind here.

That's terrific news on both fronts!!

CONGRATZ on your engagement.

Posted by: Nettie on March 2, 2006 10:40 AM
What's on your mind?.....
(new here? please read this before commenting)
Remember, this is a fan site.
Keanu Reeves is in no way connnected to this website.
Please do not make a comment thinking he will read it.
Comments are for discussion with other fans.
Thank you.