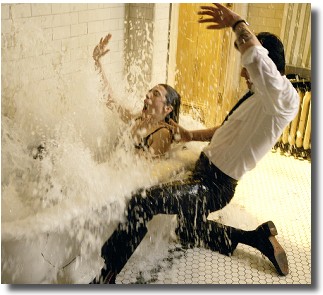 According to BoxOfficeMojo, Constantine made over 46.5 million dollars worldwide on its opening weekend. Its competition included a film starring an adorable dog that uses his munipulative cuteness to entice ticket buyers and something called Because of Winn-Dixie.

...and it's got a higher average than Hitch, so I guess the splash it made is big enough, considering...
Same over here, where JC also made the biggest average but because of a limited release entered only as #2...

It "sticks in my craw" (to use Mr. R's phraseology) that they don't mention that Hitch was on over 560 more screens than Constantine. Well duh, it's gonna make (a little) more because all the kiddies can get into that one... And I'm back to not liking Kurt Loder one little bit. (The 80's are over, Kurt, when are you going to get a real job?)

Thank you for listening; I'm feeling much better now.

And here I am just staring at that picture, because I love the graceful way his hand is thrown up, even though a lot of water is flying up at him...

I hear it's doing really well in theaters ;-)

all i know is, i'm STILL doing my part, and will continue to do so as often as i can get to a matinee, for the duration. there's nothing like keanu on the big screen!

yes... thanks for listening i 'm feeling better too...
...i was listening to my heart... i am listening hard...
finding the place the place where you are...
i know i have something good for you
i can make it with low production value!
something something something true...
so drawnnnn so drawn to be near...
just want to be careful dear...
the hearts are speaking and minds are agreeing..
i just turned and tuned closer to you
really really
i have a plate with a heart on it too.

hmmmmmm.....and thanks again.... i guess i'm some kinda artist with artistic expression needs!

oh yes.. constantine in the theaters..!!

amazing opening weekend numbers!
love it!
he knows his stuff!

hey, just found your site through the lj community and i think it's great!!!

Posted by: Jaclyn on February 24, 2005 02:32 PM
What's on your mind?.....
(new here? please read this before commenting)
Remember, this is a fan site.
Keanu Reeves is in no way connnected to this website.
Please do not make a comment thinking he will read it.
Comments are for discussion with other fans.
Thank you.