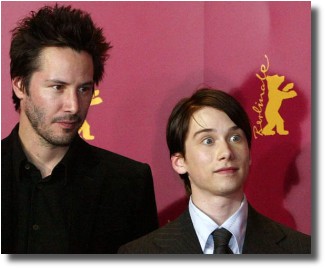 Congrats to Lou Pucci for winning the Silver Bear award for acting at Berlinale.

Creezy sent some translated coverage and comments on Thumbsucker. Click below to read it...

"Talking about 'Thumbsucker' at the 'Berlinale'. Since I read a lot of critics from 'more-in-the-film-business-involved'-portals, magazines and newspapers – those making up their mind because of a film's story and qualitity and not because of 'who star' is playing in it, like boulevard magazines loves to do – 'Thumbsucker' got a lot of real good critics.

'Thumbsucker' was handled as an outsider at this festival. The start
for 'Thumbsucker' turned out to be more difficult as anyone could
anticipate. The festival's opener 'Man to Man' (even the first movie in
the contest, too) was completely destroyed by critics and audience.
This never happened before in the history of the 'Berlinale' so far.
The festivals opener always seems to be automatically one of the
favorites for the 'Golden Bear'. That's a kind of desaster for a
festival as you can imagine. And it placed 'Thumbsucker' - as the
second movie which was shown during the contest – in a
'but-this-movie-now-has-to-be-perfect'-position. A new and difficult
situation for a small movie. Guess this gave Mike Mills a hard time for
his first work as a long film-director. This – hopefully – will explain
to you why some of the media experts didn't mentioned this movie in a
friendly and positive way at the very beginning of the festival like
the movie deserved. Additional it was 'en vogue' writing things down
this year, just strange. But reporters who thinks twice, those who are
more involved in movies as the yellowpress will ever be, loved
'Thumbsucker'.

Now I am glad I can take back things I had to write down about the
press' opinion in my earlier report (02/12/2005) and replace it with
some good, warm hearted and professional quotations from other critics!

Personally I don't think 'Thumbsucker', as the movie itself has a
chance for one of these 'Bears' because the last and this year (thx to
Mr. Bush!) the Berlinale's focus it pretty much on films with some kind
of political content (Hotel Rwanda, Sophie Scholl etc.). That was the
trend this year.

Meanwhile they announced all winners: it's Lou Taylor Pucci who the
jury found worth it to receive the 'Silver Bear' for best acting role
in 'Thumbsucker'. Congratulations! And he looked awesome while the
ceremony. (Hah, Keanu just in case you need some advices 'how to
shave', this young man could give ya some hints! ,-) )

Coming to the critics:

'This is a most european movie coming from America.'

(That's by the way the sentence I read most in conherency with
'Thumbsucker'. And there IS NO better commendation for us europeans to
give away! ;-) )

arte: grade: outstanding
(arte is a TV-channel, a coorporation between france and germany, very
culture orientated.)

'Director Mike Mills shows in a incredible way how everyone of his
characters in 'Thumbsucker' lives in eveyones own opposed world and how
difficult it is to communicate in it.'

'The cast... and Keanu Reeves as a 'hippie'-dentist - is almost
excellent.'

'All elements (for an american independent movie) are existing: the
gaping boredom of all americans small towns, the typical atmosphere on
the campus, all these strange types. And of course big stars can be
seen in supporting roles, while giving us a proof of their abilities of
mutability. Keanu Reeves plays the post-hippieesque dentist who belongs
to Zen and psychology.'

'And, how pleasant, he (Mike Mills) has something to tell - in a way,
that is absolutely worth seeing it.'

'It is a modern none-controversy american small town-movie - the ideal
contribution for this festivals start!'

'This is a most european movie coming from America. And a very, very
entertaining one with the perfect balance made out of humor, emotions
and brain.'

'The story in this movie is been told in an extraordinary way: Nothing
seems to be exaggerate. Here we have enjoyable sometimes freaky
figures, everyone of them has own problems, but they are not totally
exhibited by the director.'

'One thing right from the start: It's not a Keanu Reeves movie. 'Ladies
darling' Keanu Reeves plays a small supporting role, a dentist, and he
does it most award-worthily. He is the 'joker' for the film – the icing
on the cake – although this movie doesn't need a star like him at all.
Instead the film needs his role, that's for sure!'

'This movie is a very emotionally and very thought-provoking.'

radio 1 -
(radio 1: is the festivals host-radio-channel. Andreas Müller: is known
as the 'butcher' of all radio-cinema-critics ;-) )

The movie is a 'good-temper' movie with an excellent cut and strange
colours. It's pretty much elegant, refreshing, easy-cutting!

I learned from 'Thumbsucker' that every third teenager in USA is taking
'Ritalin' as medication – and 'Ritalin' is only three (!) molecules
away from cocaine!

A fantastic Keanu Reeves plays a dentist in a small supporting role.
He's changing his personality several times, searching for answers. But
notice: This is not a Keanu Reeves movie.

It is a beautiful movie. Please go and watch it!

'In generally this is not one of these 'coming-of-age'-comedys. This
one is done by Mike Mills in a very fine and suggestive way. There is
no crudeness is in this movie, nothing seems to be too obvious.
'Thumbsucker' has only one little mistake: It's a bit, well, boring. We
know right from the start, what we should know by the end of the film
finally.'

'After a mizzeld grand opening spring is in Berlins air – and the
affecting-exhilarating teenage story 'Thumbsucker' displaces the
adversity of the miscarried Africa-drama 'Man to Man'.'

'The film tells the story of a teenager... in a touching and amusing
way...'

'It could have been degenarate into a gray boyhood-drama or a foolish
satire but Mike Mills gave it a balance: we've been very rarely told
before about the problems of growing up in such a seriously and elating
way like the director Mike Mills did in this movie.'

Die TAZ
(Newspaper - one of the most 'left' orientated in germany)

'...I (the author) don't believe this and would agree with the opinion
of the post-hippieesque dentist from Justin (Keau Reeves in his first
post-matrix-part is pretty much a class by himself!), who says by the
end of the film that thumbsucking was a good strategy of Justin to deal
with all his teenage problems.

A lot things in this movie happens without any breaks (or breaches?)
nevertheless 'Thumbsucker' is a beautiful movie. It explains
believeable and with sympathy in its details about problems american
teenagers have.

'It seemed from now on this years festival is only formality yet. But
then you cannot believe that cinema is always keeping a surprise to you
after such a long time of experience. For example: an american movie
like 'Thumbsucker', directed by Mike Mills, everything else than just a
hollywood movie but therefore one of the most beautifull movies about
growing up since 'The Ice Storm'.'

'How unusual – this movie is able to describe both part of sides
(adults/teenagers) as captives in their own world of aspirations and
fears at the same time.'

'Mike Mills puts this odyssey of a young man on – but not without a
very fine sense for the absurdness that seperates perception and
reality from each other.'

'With 'Man to Man' the Berlinale was oppened,
With 'Thumbsucker' it had finally begun!'

Um, did Mr. Pucci see a ghost or something? I have never seen someone's eyes so wide open in my life! LOL Of course, maybe the realization that he was standing next to Keanu Reeves finally took him over.

"A fantastic Keanu Reeves..." those are words I love to hear (or read in this case!)

thanks for sharing creezy! I'd read some good ones already *waves at Niobe* but this is the frosting on the cake!

His eyes are definitely "wide" in this pic.

Lou did an OUTSTANDING job as Justin Cobb. I definatley believe he's in the same league as River Phoenix and deserves all the plaudits he gets.

Keanu has become a sort of mentor to him in a way. They all have been giving him advice about 'the biz'.

Thumbsucker is a great movie and I hope you all get to see it soon.

1. Thank you creezy! and krix too.
2. I'm pretty sure Lou doesn't shave yet.
3. Everything I read after the line "Keanu Reeves plays the post-hippieesque dentist who belongs to Zen..." was a little bit fuzzy. :)

How I hate to blow your bubble, Zenny, but this is what they said on arte:
... Keanu Reeves en inquiétant dentiste féru de psychologie zen...

Niobe, you are no longer allowed to come anywhere near my bubbles.

Oh yes, Niobe is so right at this point, that's exactly what they wrote. And what made me wonder (and laughing out loud!)... what the heck should be 'psychology Zen'? I mean 'la philosophie de Zen'  yes! Zen is a religion or call it a philosophy but it has nothing to do with the scientific study of the human mind and its functions  what 'psychology' is.

So an 'and' between both words give it a meaning that exists in real life  although this special critic maybe wants to sent anyone who believes in Zen, Jesus or whomever to a psychiatrist first! ;-)

...that's why I I thought at the end after reading all the critics 'what do they (those critics) smoke sometimes...?

I would give our little Zen the bubbles. She deserves them!

zen... my little zen story... now that i've returned from the land of wonderanddreams...where keAnu is as well... i was just checking dude! i am resingned to you...
... i got this book one time zen mind beginners mind... it said on the opening page...
something out of B&T... beginners mind consists of knowing that you know nothing...
... so i then closed the book! so i know all about zen cause i know nothing about it!
.... omg.!
i make great mexican food! je prefere?

he is rightous in this one!!! please!!!!!!!!!!
trust me i had heightened awareness while seeeing this on my first sundance trip...

sooo having said that and having not wanting to spoil it for anyone who hasnt seen this yet...
KEANU... adds just the right spice to this...cinnamon...and cumin...

his presence is very strong... and this in a way energizes the entire film...and he is equally matched with the strong performances by every member of the cast...very artfully balanced by mr. mills... obviously this was/is a labor of love for him as thre was much care put inot each and every moment of this film...he must have been breathin it dreamin it eatin it sleepin it...
but more than 'just' a strong presence...
keanu, master of his craft, yet always learning,
turns in a a perfectly warped character...
i think lou says... dude.. your my ortho man!...
and dr.mr. marry perry says .... look at themoooonnnnn and find yer power animal!'' OKOKOIKOIKOKOKOKLOKLPOLOOOKOKOKOKOK!!!!OK!
cause we are not amazing enough!! yet!!

i l o v e a fantastic keanu reeves!
he is GREAT in this!

it's excellent commentary on some prevelant thought forms floating around in families today.....
and how the transitions come about...
very touching...
but ma... he plays a dentist in the MOVIES!!!!

I watched the Berlinale press conference (online) and there were a few times that Lou reminded me of Johnny Depp. His mannerisms and the way he looked. Just a little bit. :) I'm sure he'll have a great career. He seems very poised for his age.

Posted by: Judee on February 24, 2005 03:55 PM
What's on your mind?.....
(new here? please read this before commenting)
Remember, this is a fan site.
Keanu Reeves is in no way connnected to this website.
Please do not make a comment thinking he will read it.
Comments are for discussion with other fans.
Thank you.