I got yer Constantine right here... 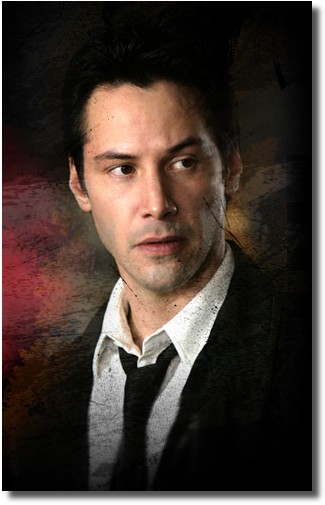 It might just be the cough syrup in me talking but...

What in the flaming hellfire of highway 101 are some of these lame-ass reviewers talking about? I've read some that are so off the mark, they don't even have the characters straight. Plus some are just mean.

Screw 'em with a stick of gum. Skits liked it, so there.

They're not all bad, of course. Actually, it's about even.

By the way, This person makes a wonderful point(thanks kaz!).

The reviewer for The Catholic News must have been enraged by the film, he uses the word *gasp* 'poppycock' in his review. *snicker*

Mike Szymanski gets it, as does Larry Carroll over at FilmStew.com. Also at FilmStew is this interesting bit about the preparations Keanu made for the role (thanks amphora!). I guess it's knowing how hard Keanu works that compounds the annoyance when some of these hacks write his performance off with the same old weary catch phrases (wooden, surfer dude, etc).

And possibly a siesta.

Some things in life are bad,
They can really make you mad,
Other things just make you swear and curse,
When you're chewing life's gristle,
Don't grumble,
Give a whistle
And this'll help things turn out for the best.
And...

Always look on the bright side of life.
~ Monty Python

I've long ago decided to ignore the bad critics,
especially those that don't get the facts right!
I've lost count on the many Katelin Dodsons I came across,
and couldn't help laughing about the many varieties
to spell names like Djimon Hounsou or Shia LaBeouf wrong...

You know, I read about a Mexican premiere ages ago, but because the date was wrong, I didn't bother posting it. That's cool that they're going though...

btw hope you are all better soon,dear (((krix)))

It makes my innards churn and it makes me want to spew all over the haters -- but this film will make lots of $$ -- and if KR wants it, there will probably be a sequel -- and that's pretty potent and very sweeeeeeeeett!!

There was a time when one could learn from the critics -- about film making, acting, directing, lighting -- but those times are long past -- critics no longer critique -- now they criticise and take cheap shots.

Speaking of eggs and bacon -- do you sometimes wonder if anyone actually WATCHED this film? -- I was just reading a discussion about "the Mexican" and what happened to him -- you would think that someone as astute as the asker of this question would have been able to figure that out -- I guess if all you did was go to the theater with your preconceived notions intact you did not need to watch and hence would not be able to figure this out, eh??

You know when the title of the review is "Ted's New Bogus Journey", that person just isn't even up to Speed. pun intended. There are always going to be the ones who think it's fashionable to bash him, no matter what he does. Thank God there are more positive reviews than usual lately, for this, and Thumbsucker, and SGG, from those who aren't afraid to say "Hey, he nailed that part."

ps. Fred Topel from action /adventure movies and Rotten Tomatoes gets it too!!!

So the film's out! Glad so many of you enjoyed it. I'll save my grumblings for the Straight to Hell forum.

I guess I won't see you guys until the sequel, so I'd just like to thank you all for being really, really great people. Especially Krix!

And, you know, in a last ditch attempt to get you people reading Hellblazer, you can download issue 1 for free from the official Vertigo Comics site at http://www.dccomics.com/features/hellblazer/intro.html

And check out issues 59-61 here: http://www.iol.ie/~jmcmahon/comics/index.html

Bye, and see you for Constantine 2!

"Born with a gift he didnt want, the ability to clearly recognize the half-breed angels and demons that walk the earth in human skin, Constantine was driven to take his own life to escape the tormenting clarity of his vision. But he failed. Resuscitated against his will, he found himself cast back into the land of the living."

Check out David Poland's analysis:
http://www.thehotbutton.com/today/hot.button/2005_thb/050222_tue.html
I didn't understand most of it, but I think he likes the movie, he just thought it could have been better. And he blames Francis Lawrence, not Keanu, whom he thought was miscast (WTF?). Anyway, I like David because he got in some snide remarks about the other critics in an almost-unreadably-long sentence at the beginning. And he has always been fair toward Keanu.

Here's what one of David's readers had to say in response today:

JW NOT MARRIOTT writes: "I have railed before against critics in emails to you. However, Constantine brings up an interesting case. As a guy who has watched Angel and Buffy for years. Constantine seemed like a weird off-shoot of the Whedonverse than anything else. It's something familar, but not to critics.

To critics, a film like Constantine has no merit. I had to fast forward through the Ebert and Roeper review of the film due to the fact it made two intelligent men come off as rather elitist bores. Critics just do not take the time to digest a film like Constantine because most critics are too much into fictionalized COMPATIBLE/ COMPARABLE HUMAN misery than fictional demons and angels fighting for our souls type misery. Even if it somehow plays into a great philosophical version of human suffering a movie like Sideways could never even touch.

Thus leaving a movie like Constantine being panned by critics too uptight to unclench their asses to enjoy the film or either too elitist to delve deeper than the usual standard Oscar fare would have them delve. At least you try, Poland... other critics not so much.

There is so much great cinema, but from the look of it. You would think that it only comes out two months out of the year. Rather strange that occurance."

James, thanks for stopping by. I stayed away from STH because I didn't think I could take the K-bashing when the film finally came out...but I still think of you guys fondly.

Can someone explain to me again, what a "tentpole" film is? Thanks! :)

Thanks to James too for the links. I will be checking them out shortly.

According to this SHH discussion, "A tentpole film is a movie that props up an entire season for a studio and makes a lot of money."

in general... the subject matter of this m ovie is pretty intense....
i wonder howm any times keanu said yes to making this movie... sounds like he really liked it and then did it!

Krix, try Advil Multi-Symptom cold medicine instead of NyQuil. Its amazing stuff, made me feel almost normal when I had the funk. Hope you feel better soon. :-)

"Check out David Poland's analysis:
http://www.thehotbutton.com/today/hot.button/2005_thb/050222_tue.html
I didn't understand most of it, but I think he likes the movie, he just thought it could have been better. And he blames Francis Lawrence, not Keanu, whom he thought was miscast (WTF?)."

I read Poland but have to disagree with him this time -- there were few misses in this film -- he goes on about the cab scene and I thought it was very funny -- showing Chaz youth and Constantine as a few words kind of guy -- much like film noir actors from the '40's (ie., Alan Ladd, Humphrey Bogart, Robert Mitchum).

"Here's what one of David's readers had to say in response today:"

JW NOT MARRIOTT writes: "..To critics, a film like Constantine has no merit. I had to fast forward through the Ebert and Roeper review of the film due to the fact it made two intelligent men come off as rather elitist bores."
Posted by: Nudel on February 23,"

I don't think they are necessarily bores, I do think they are bored -- to many movies for to may years -- they are jaded and lack the ability to see and respond to creativity that wanders outside their notion of what "the box" is.

OMG i missed everything! ALL the tv spots....

I have to agree with Chianti. Any review that starts with "Ted's New Bogus Journey" or Ted's anything whatever, is not worth the strain on my eyes nor the three minutes it might take me to read it.

Thanks for the definition Krix. :)

That sure is a beautiful picture... whew. Marvelous. And I don't use that word very often.

yeah, i was reading many of the reviews, until i came across the one that said keanu couldn't even smoke convincingly. and i thought to myself, fuck this shit, if they're not even going to make an effort to understand it/him, why should i make the effort to read what they (pretend to) think?! as a general rule, when a reviewer says something sucks, i tend to want to see it just to make my own decisions, anyway...

I haven't seen it yet but most of the people I know who are not opposed to seeing it (here in the Bible belt, folks generally make up their minds first and see the movie later no matter what I, a good little girl myself, say....), have loved it.

I never side with the critics. And I can't wait to see it!!! I've been talking about it since 2 days before it came to theaters.

I don't know how many times Keanu said "yes" before making this film, but it sounds like a sequel is already in the works :-)

...hope you are feeling better Krix.

BTW James...I already own 4 copies of the original comic, and I read STH too. I am DEFINITELY going to check out those links, thanks! See ya for the sequel ;-)

i'm very proud of him and his work...
if he knew how much

but...
one of the main things about this movie (after seeing it 3 times so far!) is the very usually heavy to weild content dealing with visions of demons, was very deftly dealt with by everyone involved... to me at least...
the character of constantine is intrugueing because keanu plays the role with excellence and because his particular set of awarenesses are not someting that comes up in most peoples everyday lives...i also really liked how he sheparded angelas abilities to the fore...

you go there fellow sicko!
and
hey skits!

i think the critics just love to bash keanu because it's the popular thing to do. i saw it yesterday and i really liked it, and so did my roommate who is not at all keanu obsessed.

i also think maybe i should be going to church every sunday.

Posted by: laura on February 28, 2005 07:57 AM
What's on your mind?.....
(new here? please read this before commenting)
Remember, this is a fan site.
Keanu Reeves is in no way connnected to this website.
Please do not make a comment thinking he will read it.
Comments are for discussion with other fans.
Thank you.