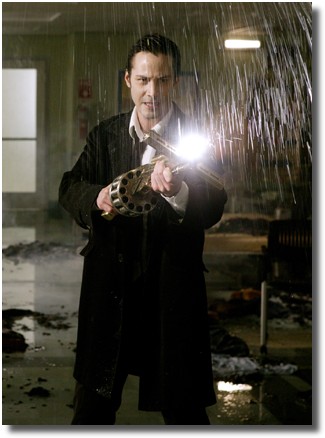 The Demon Hunter
Keanu Reeves's Matrix character was a tool of destiny. In Constantine, he's the opposite -- 'hard-boiled, world-weary, cynical, fatalistic, nihilistic, self-interested'

Keanu Reeves used to be unsure and unfunny, and painfully uncomfortable when grilled by reporters. What a difference a decade makes. As he saunters into a press conference promoting his new movie, Constantine, it's the journalists who look uneasy.

The Toronto native, on the other hand, grins broadly when he spots an ornate, oversized chair awaiting him at the front of the crowded hotel room. But rather than sitting down, he stands beside it and grandly announces, with impeccable timing: "I need," he says in a pompous English accent, "a bigger chair."

He gets the laughs he was looking for, then sits down, secure in the knowledge that being a confident 41-year-old does have its advantages.

So does starring as Neo in the wildly successful Matrix series, which wrapped last year. It gave him A-list leading-man status and earned him the biggest paycheque of his career. What did he do with the US$30-million-plus? "I bought a bigger chair," he says to more laughs.

Jokes aside, Reeves had to make some serious career decisions about whether he should pursue the lead in Constantine, which opens in theatres across North America next Friday.

Based on the English DC Comic graphic novel, the movie concerns John Constantine (Reeves), a demon hunter trying to win a place in heaven by eliminating the devil's messengers on Earth. There's terror and action, propelled throughout by the brash and sarcastic central character. An introspective Neo he is decidedly not.

"Constantine is a very extroverted role on the whole," says Reeves, getting down to business. "So much about it is very different from the experience that I was having with Neo. Constantine's that hard-edged, hard-boiled, world-weary, cynical, fatalistic, nihilistic, self-interested guy," says the actor, then, grinning, adds, "but with a heart."

Typecasting was not an issue. Reeves says he was more concerned that "fans of the comic don't feel that we sabotaged something that is so well loved."

To that end, the actor spent nine months of preproduction immersing himself in the world of Constantine, working on the wardrobe and the lines with first-time director Francis Lawrence.

"Even before we had rehearsals," says Lawrence, "we had this clear idea of what we wanted, and how Keanu wanted to play it. He doesn't like to leave anything to chance."

Reeves's passion for his roles says as much about his love of acting as it does his detail-oriented personality. "When I was 15, I went up to my mother and I said, 'I'm an actor,' " says Reeves, recalling his early days in Toronto.

And what did his mom say? "She said, 'Whatever you want, Keanu.' Within three weeks I was enrolled in an acting class [doing] Uta Hagen's Respect For Acting."

He also worked as a Toronto production assistant, talked his way into roles in local plays and, to learn his craft, became an inveterate moviegoer -- compulsively so when the film festival came around every September.

"Sometimes I did that instead of school" he says. "The first year that I went was in '83 when Blood Simple was there. That was the year I would write down all the films that I saw -- like 76 movies that time, I think."

A few years later, he was co-starring in River's Edge. In 1989 the first Bill & Ted film adventure got him launched. But it was Speed in 1994 that made him a bona fide movie star, a job title he rejected when he refused to do the sequel. But the success of The Matrix in 1999 forced him to accept his lot.

He will talk about his world view, but only in generalities. As for religion? No way. It's a topic the film Constantine uses to great effect, but he refuses to reveal his own philosophy beyond saying, with a wicked smile, that "God is like Santa Claus. If you're naughty or nice, He knows.

"Like the book says -- the Constantine book -- 'He works his works in mysterious ways.' Some people like it, some people don't."

Career moves work in mysterious ways, too. Constantine looks like it has the potential to be another Reeves film franchise.

He shrugs. "I fell in love with the guy," he says smiling. "But why stop there? Let's do The Son of Constantine, and I'll play him too with CGI."

Seriously? Not really. He is serious about one thing, though. John Constantine and Keanu Reeves have a lot in common.

"He's an alienated character in an alienated world," says Reeves. "Part of his journey is about trying to connect, and eventually he does."

Typecasting has never been an issue throughout his career, says Keanu Reeves, but in choosing his latest role as John Constantine, Reeves was concerned that "fans of the comic don't feel we sabotaged something that is so well loved."

If only I could have heard the bigger chair thing. In my mind it sounds like Graham Chapman as a pepperpot.

*looks askance at krix* I promise I won't do any Monty Python.

did i mentioned, that i´ve got "premiere" (mag)? at last they launch it to europe!
*the son of constantine* hmmm, i just read sonnets (shakespere you know!) and it´s TIME!

i can't wait to see this!

gosh... now that i htink about it... kenu is th e only one with that blessed holy shotgun!
i dub thee Sir Keanu Reeves!
most sacred knight of the holy orderof whereever!

ho·ly ( P ) Pronunciation Key (hole)
adj. ho·li·er, ho·li·est
Belonging to, derived from, or associated with a divine power; sacred.
http://jmm.aaa.net.au/articles/14244.htm
http://www.mnsu.edu/emuseum/history/middleages/knighthood.html
i htink he is like a knight in shining holy shotgun!
of course there is son of constantine! ayayayaayaayaayy!

but why do tyou thin kthey call it holy!
http://www.vatican.va/phome_en.htm
btw... probably many answers to world questions lie in the vatican secret library! ...!
http://www.vatican.va/liturgical_year/liturgico_en/ordinary.html
apparently the divide time into categories of ordinary and spiritual...
http://www.vatican.va/holy_father/special_features/eucharist/index_en.html grapes
i keep getting something evangelical about a role for kenu... it could be constantine.. he is a magi/priest in a way... or at least he plays one on the movies... and i hear consulted with some very speical ones...
http://www.whitecape.org/art/backgrounds/holy-cross/Holy-Cross_1024x768.jpg

http://www.vatican.va/archive/ENG0839/__P1J.HTM#$74
Basket: literally, "chest" or "ark"; the same Hebrew word is used in ? Genesis 6:14 for Noah's ark. Here, however, the chest was made of papyrus stalks.
http://www.lorenadams.com/IMAGES/ACCEL1/ANCIENT.JPG


Posted by: wanda on February 10, 2005 06:48 AM
What's on your mind?.....
(new here? please read this before commenting)
Remember, this is a fan site.
Keanu Reeves is in no way connnected to this website.
Please do not make a comment thinking he will read it.
Comments are for discussion with other fans.
Thank you.