this picture makes me very happy for some reason 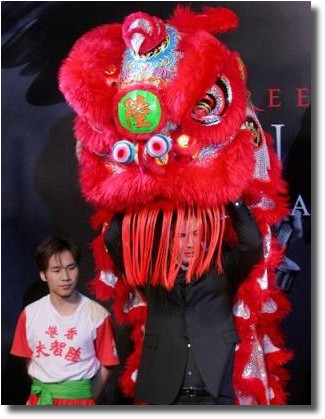 HONG KONG -- Hollywood star Keanu Reeves said he trained with an exorcist for his latest film, "Constantine," and he was relieved that no supernatural forces plagued the movie set.

"There were no paranormal events that took place on the film that I know of. Thank God!" said Reeves, 40, who plays the title character in "Constantine" - a man who battles to send demons back to hell.

He described his character as a "world-weary" and "nihilistic guy with a heart of gold."

Adapted from a DC Comics series, the film will have its world premiere in Hong Kong Tuesday - 10 days before its opening in the United States.

"I went with an exorcist for a bit. I just want to know really practical things, like how do you hold someone possessed by the devil," Reeves said.

The star of the "Matrix" and "Speed" action thrillers said his latest role also makes him less skeptical about the existence of hell.

"Constantine kind of knows it's fact. So I guess if I had any doubts before, I probably have a little few less doubts now," he said.

Update 2/9: KeanuWeb has footage of Keanu with the lion dancers, it's adorable!

Dude. I just saw the international trailer (which is kinda spoileriffic), and I am beyond psyched for this movie. eeee!

Glad you're back among us...! and how cool are those pictures from HK?

Looks like he's taming the dragon in this one ;-)

Aren't they always doing this to actors (politicians, too)? "Welcome to our country, here, put this on your head." LOL But it's still cute.

yay!!!!! makes me want to go to hong kong to celebrate chinese new years this year

it's on the eighth

omg i think i get satelite chinese channels dya think he'd be on them???

There is a very cute video clip of him (at Club Keanu) that shows him messing around with the dragon guys--he gets really lively!

http://sekaiseifuku.net/hakuname.html
The Naming of Gods

The naming of gods is a difficult matter
It isn't just one of your holiday games
At first you may think that I'm mad as a hatter... *

And no doubt I am, but of all the mysteries surrounding Haku, this is one of the most trivial and yet most aggravating: how do you write his name in kanji? Miyazaki gives us no hints. In the movie script and every other piece of official documentation I've seen, "Haku" is written in katakana. Same with "Nigihayami Kohakunushi" (his true name, which we learn in the original version of the film, although not in the English dub). We are left with no recourse but invention--so let us invent!

Among Japanese fans, writing the "kohaku" of "Kohakugawa" (Haku's lost river) with the kanji for "amber" seems to be popular:

I agree that this is the most obvious choice in terms of vocabulary, but it leaves me dissatisfied. Why amber? There's nothing amber about him. Now, I've only seen one Japanese writer propose this alternative, but you can get "kohaku" with the characters for "small" and "white":

...And isn't that cute? "Small" because he's a youngster (er, in god-years), and because his river was apparently not a large one. And "white" because, uh, he is.

Which brings us to "Nigihayami." "Hayami" is easily done with "fast" and "water," and that could hardly be more appropriate. As for "nigi," my kanji dictionary offers two options: the "nigi" of "nigiru" (to grip, grasp; also in "onigiri") and the "nigi" of "nigiwau" (to flourish, thrive) and "nigiyaka" (lively). Haku's penchant for making rice balls notwithstanding, "gripping fast water" doesn't make a whole lot of sense to me, so here's "lively fast water" instead:

At least there's no question about "nushi," which is "guardian" or "master," plain and simple. So here we have "Lively fast water small white master," or, in more elegant and coherent terms, "Master of the lively and swift-flowing small white river":

However! It has come to my attention that "wa" (peace, harmony; also Japan; used in "nagoyaka," gentle/mild) can also be read as "nigi." This gives us another option, one that I like perhaps best of all:

http://www.karatedepot.com/catalog/images/items/ot-pa-70.jpg
i love that greeting!!!!!

oops... ididn't realise that was too much... sorry!

Wanda~~~I see your nod to TS Eliot in this post!

Hello friends
sorry...
I am Japanese, but I can not understand these.
I think wondas translation is perfect.

I made a mistake in the name. I am so sorry wanda.

This shot is too damn good.....also love your pics at Sundance, especially you and Wanda & the director!

I mean, that kid is so cute!

Did I mention my weakness for those of the Asian persuasion?

Hey krixy. Been thinkin' of ya! Hope everything is well with you my dear.

Hello, I am from Hong Kong.
What Keanu was holding is a lion, not a dragon.
So, Keanu is playing a lion dance.

Hello, I am from Hong Kong.
What Keanu was holding is a lion, not a dragon.
So, Keanu was playing a lion dance.

Posted by: Jelly on February 9, 2005 10:07 AM
What's on your mind?.....
(new here? please read this before commenting)
Remember, this is a fan site.
Keanu Reeves is in no way connnected to this website.
Please do not make a comment thinking he will read it.
Comments are for discussion with other fans.
Thank you.