Thankfully, POTD, KeanuWeb, Keanu A-Z, and Club-Keanu are doing such splendid coverage on all the Constantinery going on at the moment, because I'm finding it really hard to focus and follow it all. 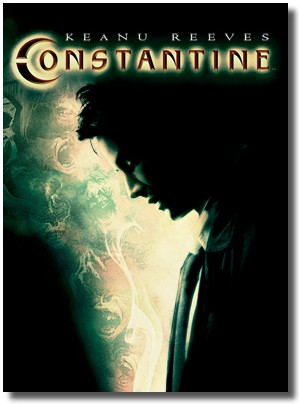 Also, bless Ale for coming through with this wonderful review by Sean Clark from the horror Channel.com


Okay, I'll admit it. I went into this film with low expectations. Another big budget Hollywood F/X film about heaven and hell helmed by a music video director (Francis Lawrence) who had yet to tackle a feature film and anchored by leading man Keanu Reeves. If this doesn’t sound like a disaster waiting to happen I don’t know what does.

In case you were unaware, Constantine is based on the popular cult comic book series Hellblazer. I have to admit I have never read the comic and didn’t really know much about it. However, I had heard that it took place in London and that the main character John Constantine was British. Apparently that concept was tossed out the window early on, and the character is now an American living in Los Angeles. I’m just thankful I didn’t have to sit through an entire 2-hour plus film with Keanu doing an English accent...Bram Stoker’s Dracula anyone?

This film doesn’t waste any time kicking into gear. The action starts right out of the gate and delivers throughout in heavy doses. There are a few slow spots in the 2-hour-plus running time, but there is actually a story being told that is worth your time.

I have never been a big fan of Keanu Reeves, but I have to say that he plays this role quite well. Constantine is an anti-hero who really doesn't give a damn about himself or the people he is helping. Reeves' performance as the hardboiled Constantine is solid throughout and the best I have seen from him in a long time.

Rachel Weisz gives a very strong performance in dual roles as twin sisters Angela and Isabel Dodson. She is a solid actress who adds a level of believability to the story that, if played poorly, could have been disastrous for the picture. Angela’s love/hate relationship with Constantine adds a romance element below the surface that is performed perfectly by Reeves and Weisz and is very well written.

Actors Djimon Hounsou (Papa Midnite) and Shia LaBeouf (Chaz) also give outstanding performances in their supporting roles, as do other notables Pruitt Taylor Vince (Father Hennessy) and Tilda Swinton (Gabriel). The only real distraction is Bush front man Gavin Rossdale as Satan’s emissary Balthazar. It’s not that his performance wasn’t good, it’s just that if you know him as the singer/guitarist of Bush and husband of No Doubt’s Gwen Stefani, when he appears on the screen for the first time, that is pretty much all you can think about. It was the only moment that took me out of the film; but if I didn’t know who he was, I believe I wouldn’t have given it a second thought.

Director Francis Lawrence has proven that he can deliver a well-paced film that isn’t too flashy and over the top like some might expect from a music video director. I didn’t get a distinct style from Lawrence, but he has plenty of skill and what appears to be a long and successful career in feature film ahead of him.

As far as special effects go this film is packed to the hilt with them. I’m no fan of CGI, and this film does have more than its share, but it seems to work well and not be too much of a distraction. The practical make-up effects from Stan Winston Studios are top notch as usual and blend well with the CGI.

So yeah, I went into this Constantine expecting the worst and came out wanting more. It blends several genres together seamlessly. It delivers horror, action, suspense, drama, and just enough doses of comedy and romance without losing its edge. Constantine is a film that I believe will find a wide audience and another potential franchise for Reeves and Warner Brothers. Move over Neo; Constantine’s in town.

Also at the Horror Channel website is an interview with Papa Midnite - Djimon Hounsou, if you'd like to check that out as well.

I never thought I'd say this but, I don't think I can take any more. I just want it to be over with.

Well, now we know the answer to the question critics have been asking themselves for 20 years:

"Would it kill us to say something nice about him?"

Well, now we know the answer to the question critics have been asking themselves for 20 years:

"Would it kill us to say something nice about him?"

LOL@Tabitha!
Hey, if even a critic wants more of JC,
I'm really looking forward to carrying my Euros to the nearest theatre
and maybe hope for a second movie...
meanwhile I'm waiting for Friday to arrive, so I can rush off to view TS in Berlin.

Too much of a "good" thing is what it is.

" But it's Reeves who, outfitted with an economy of dialogue and costume designer Louise Frogley's sleek monochromatic apparel, gets the requisite film noir look and attitude down cold. He and Weisz, who once again projects a beguiling combination of beauty and intelligence, make for a classically cynical graphic novel couple."

And I read in chud.com forums that one of my favorite reviewers on the web, Nick Nunziata, found the movie "terrific, really terrific"...

I know some won't like the movie, the reviews will be mixed because it's impossible to please everyone in that genre, but after more than a year of so violent slams on Keanu... it's quite good to read some nice things for a change. :)

Thanks for the link, Ale!! I consider this the first *real* review, even though it's in a trade publication (that gets advertising revenue from WB) and I am therefore cynical.

well... interesting... sometimes it's good to keep your mind fresh a bit...

i'm sure this film will ber a crowd pleaser...
i'm always very interested in reeves' projuects and choices... who can fathom the mystery of the man... but he sure is adorawable! still... this is a serious piece of filmmaking and the people invloved are are way out of my league!
i just go to the movies!...andi can't wait to see this on Valentines day! actually i was always intrigued with the fact that people dedicate their livees and careers making movies
yes love that sound good, have meaning, create the art via the science of filmmaking... and all so we can go in for a couple of hours for a very nominal fee and have the movie experience...

thanks for those quotes Ale and also to krix for just being you!

i agree... it's impossivel to please eevery one...someones always gonna be the contrarian... but what's wrong with that!

i've been away from my baby's sites for too long...

oh... and keanu as actor... please.... he is
brilliant... he's got what it takes to compete and be successful in one of the most competitive
fields of business today...he is there for a reason and he is only going to get b etter... people work their entire lives to be the best in their field.. and he is one of them... the best.
i ahve always believed that...but its' not a matter of belief... he has proven it ... and hey they can't all be

and i do believe that filmmaking is a place where art meets commerce and gets married! it's probalby, andi'm not really thinking clearly right now...trying to organize... one of the only major arts that you can't be a master at byyourself... unlike painting, sculpture, photography.. etc.. fimmaking requires the well honed talents and skills of many individuals.... sigh! i digress AND psychobabble!

Posted by: wanda on February 8, 2005 05:30 PM
What's on your mind?.....
(new here? please read this before commenting)
Remember, this is a fan site.
Keanu Reeves is in no way connnected to this website.
Please do not make a comment thinking he will read it.
Comments are for discussion with other fans.
Thank you.