Oh, Constantine, don't be so paggro 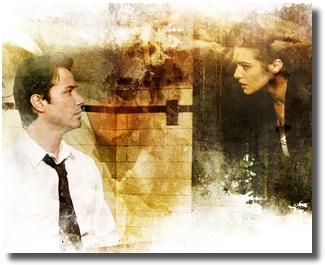 A Perfect Circle's Next Single 'Passive' Slated to be the Featured Song in the Upcoming Film 'Constantine' Starring Keanu Reeves and Rachel Weisz and Directed by Francis Lawrence; Single to Hit Radio on January 18

NEW YORK, Jan. 11 /PRNewswire/ -- Virgin Recording artist A Perfect Circle's explosive new single "Passive" will be the featured song in the upcoming motion picture "Constantine," from Warner Bros. Pictures and Village Roadshow Pictures, starring Keanu Reeves and Rachel Weisz. The supernatural-thriller, which marks the feature directorial debut of famed video director Francis Lawrence, will open nationally in the U.S. on February 18, 2005. "Passive," the second single from APC's critically-acclaimed album "eMOTIVe," is set to impact active rock and alternative radio on January 18, but the song is already burning up the airwaves, with major market airplay in New York, Los Angeles, Chicago, San Francisco, Boston, and Washington. The Brothers Strause, visual effects supervisors for Constantine, and well-known video directors in their own right, are set to direct the upcoming "Passive" video.
[...]
The song's message about passionately sticking up for what you believe in is a central theme of Constantine. Based on characters from the DC Comics/Vertigo "Hellblazer" graphic novels, the film tells the story of John Constantine (Reeves), a man who has literally been to hell and back. When he teams up with skeptical police detective Angela Dodson (Weisz) to solve the mysterious suicide of her twin sister, their investigation takes them through the world of demons and angels that exists just beside the landscape of contemporary Los Angeles. Caught in a catastrophic series of otherworldly events, the two become inextricably involved and seek to find their own peace at whatever cost. The film also stars Shia LaBeouf, Tilda Swinton, Pruitt Taylor Vince, Djimon Hounsou, Gavin Rossdale and Peter Stormare.

I dig me some APC. Bummed Paz left, though.

You can listen to it here (Thanks, John).
Buy the eMOTIVe album here or at your local retailer.
& thanks to Nettie for the lyrics...

Wake up, and face me
Don't play dead, cause maybe
Someday I'll walk away and say
You dissapoint me
Maybe you're better off this way

WAY FREAKIN COOL I saw A Perfect Circle open up for Nine Inch Nails a couple years back my fiancee has liked them ever since.. Thanks for posting it Krix..

Does this mean perhaps a MUSIC VIDEO on MTV which might feature some scenes from Constantine?

One can only hope...

Thanks Krix. Oh, I loved the music! I listened a couple of times now, getting better and better... And I was thinking about the video too. Bet it will have scenes of the movie! Keanu... oh... Yay!!!!

i tried to listen yesterday, but for some reason when i clicked the musin wouldn't play...
(((
OK... i hgeuss ya have to put the wires tothe speaker IN the conputer to make them hearable...

Thank you JOHN and Krix for posting this song! Love it!

I LOVE a perfect circle, awesome ; )

I am finally able to hear this on my computer...very cool. I wanna see the video ;-)

Posted by: lizzie on January 13, 2005 07:29 AM
What's on your mind?.....
(new here? please read this before commenting)
Remember, this is a fan site.
Keanu Reeves is in no way connnected to this website.
Please do not make a comment thinking he will read it.
Comments are for discussion with other fans.
Thank you.