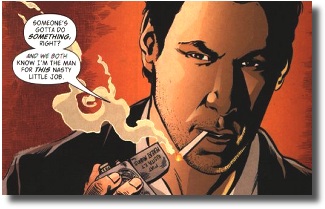 According to the blokes over at the Straight to Hell Boards, The Constantine Official Movie Adaptation hits stores this week (check your local comic shop). Apparently, the last panel sucks. Whatever. It is, of course, all manner of SPOILERY, so even if you're thinking about picking it up you might want to not read it until after you've actually seen the film.

Club Keanu has scans and Keanuweb has the text of an article on Constantine in the christian magazine - Relevant. The magazine talks with director Francis Lawrence and the piece has a bit of a spiritual angle to it, without being obnoxious. It's actually a good article, especially in contrast to some of the re-hashed fluff we've seen lately.

Speaking of fluff, I don't know what "details" there are in this...

'Music Composed by Brian Tyler. Release Date: 02/15/05 Renegade occultist John Constantine (Reeves), who has literally been to hell and back, teams up with skeptical policewoman Katelin Dodson (Weisz) to solve the mysterious suicide of her twin sister.

Their investigation takes them through the world of demons and angels that exists just beneath the landscape of contemporary Los Angeles. Based on the DC-Vertigo comic book Hellblazer.

In his epic score for choir and orchestra, composer Brian Tyler literally throws open the gates of Hell and unleashes a ferocious and apocalyptic symphonic storm.

I was expecting at least a track listing or something...

Lastly - Ooooooh, lookie! The Official Constantine Site has finally been updated. With all those 'coming soon''s, it's got a bit to go to catch up with the German Constantine site. I'm interested in that fan art link, though. I hope there'll be a way from some of our mondo-talented resident artists (cough*CATZ*cough) to submit their work.

I want to read the comic, but I'm frightened. I think I'll just skim it for the piccies.

I love the look of this, but have to admit I've stayed away from the hellblazer boys. I just got worn out by the whinging and whining...

So...hmmm..do I peek or not...I did buy Dangerous Habits.

The very lovely and TALENTED Catz ;-)

Im glad they finally updated the site, because this movie is coming soon to a theater near you.

So the comic's ending doesn't seem to have inspired K to rethink a certain habit!
I couldn't stop laughing...
and I'm still wondering what WB's trying to achieve with that official US site...

It was Sundae Sunday - the premiere of 24 with a trailer of Constantine sprinkled on top. YUM!

i must say... i am very inspired by all things constantinian....
i know i have a response timing thing... but i have a platonic roomate tooa and once in a while i have to pay attention to taht... having said that...
consider me inspired and active....

i love the fan art idea!

Posted by: lizzie on January 11, 2005 04:11 PM
What's on your mind?.....
(new here? please read this before commenting)
Remember, this is a fan site.
Keanu Reeves is in no way connnected to this website.
Please do not make a comment thinking he will read it.
Comments are for discussion with other fans.
Thank you.