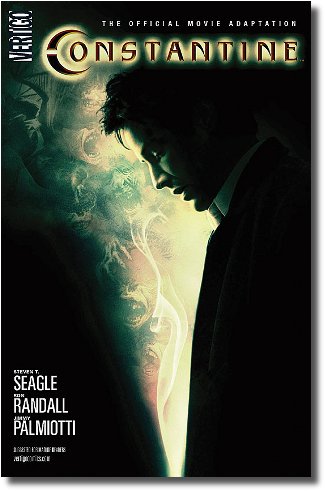 
"John Constantine is a man who has literally been to hell and back in the Warner Bros. Pictures film Constantine, a supernatural thriller based on the long-running hit DC Comics/VERTIGO HELLBLAZER graphic novels. When Constantine teams up with skeptical policewoman Angela Dodson to solve the mysterious suicide of her twin sister, their investigation takes them through the world of demons and angels that exists just beneath the landscape of contemporary Los Angeles. Caught in a catastrophic series of otherworldly events, the two become inextricably involved and seek to find their own peace at whatever cost."

The 64 page graphic novel will go on sale January 5, 2005 for $6.95. It will also be included in the larger CONSTANTINE: THE HELLBLAZER COLLECTION, which collects the official 64-page VERTIGO adaptation of the film along with three classic issues of JOHN CONSTANTINE: HELLBLAZER. Included are issue #11, which kicked off VERTIGO's longest-running series and set the tone for the character; #27, which brought SANDMAN creator Neil Gaiman and his longtime artistic collaborator Dave McKean to the title with a haunting story of fear and loneliness; and #41, which opens the "Dangerous Habits" storyline with Constantine discovering that he has lung cancer in "The Beginning of the End." This 168 page collection is also on sale January 5 at a price of $14.95 and is suggested for mature readers.

-Thanks to John McMahon

Hopefully the Movie Adaption Issue will go on sale over here as well! Keeping my fingers crossed!
I can do without the collection because I own the three issues mentioned there, like most of the rest...
Thanks for this Info, krix!

The cover is fantastic. I am so looking forward to this...

I STRONGLY ADVISE that all of you lovely Keanu fans pick up the movie adaptation but leave the "Hellblazer Collection" well alone, since each of the individual issues can be found in the trades "Original Sins", "Dangerous Habits" and "Midnight Days."

Basically it's a rip-off.

But James...then we would have to buy *three* trades! *wink*

i think Constantine the role seems to appear thought provoking...an inside scope from another mind of the perception of life and after the movie he probably won't be called the "critics whipping boy", from years ago. there will be a mastery of drama in the film displayed by keanu. something i think most of his fans were waiting for and something he was waiting to feel inside himself as an actor. my guess is, i don't think we will see the quintessential keanu, i think we are witnessing the very reason why he become an actor to feel untapped emotions year after year, searching in his soul to find the strength to release another emotion and display them in a climactic role...intriguing return after the Matrix trilogy, i have to say. there's no writing on the wall just compliments of his growth. excellent

...very thought provoking Kyss. No handwriting, it's all good ;-)

nicely done putting it to words kyss! i agree...

I STRONGLY ADVISE that all of you lovely Keanu fans pick up the movie adaptation but leave the "Hellblazer Collection" well alone, since each of the individual issues can be found in the trades "Original Sins", "Dangerous Habits" and "Midnight Days."

Basically it's a rip-off.

as morpheus said: time is always against us! *omg* january!

peace is always a good goal... sort of connotes wholeness... i think...

love ( P ) Pronunciation Key (lv)
n.
A deep, tender, ineffable feeling of affection and solicitude toward a person, such as that arising from kinship, recognition of attractive qualities, or a sense of underlying oneness.

and the good thing is regarding...love...also known to be accompanied with useful serges of lust every so often..i think therefore i exist

omg... you got me to laugh!!!!
useful surges of lust....omg. i didn't put ALL of the definition of lv up there...
i'm trying to practice demurity...whatever!!

Is it love or lust?

The rest of the definition from the same dictionary defines love as "charity -- the theological Christian virtue" having these characteristics:

"Defined and directed first toward God, but also toward oneself and one's neighbors as the object of God's love...also, demonstrating the characteristics of benevolence or generosity toward humanity and forbearance in judgment of others."

Whereas it defines lust as "to have an intense or obsessive desire, especially one that is sexual."

God created...love and lust,because he created us... really its all a control issue relative to health :)....i'm guessing(now is where you laugh) i don't have the answers but it sounded accurate to me ;)

all in all, he is just very,very handsome. thats what we really are trying to say ;)he is kyssalicious.

all in all, he is just very,very handsome. thats what we really are trying to say ;)he is kyssalicious.

neosjourney, i am happy you agree,i was trying to find the appropriate words to express my feelings about Keanu, took me several days to respond to you (birthday emotions make me dreamy)in two weeks i will return to normal.
we have something in common...;) respond please, i read the blogs.

Posted by: wanda on October 25, 2004 03:01 PM
What's on your mind?.....
(new here? please read this before commenting)
Remember, this is a fan site.
Keanu Reeves is in no way connnected to this website.
Please do not make a comment thinking he will read it.
Comments are for discussion with other fans.
Thank you.