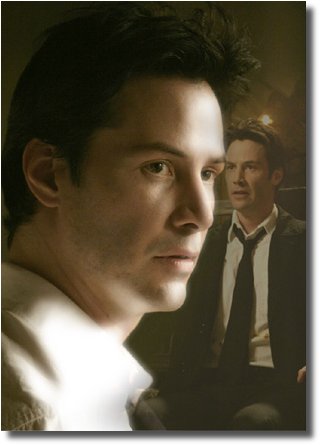 SuperheroHype has a couple reviews from last night's test screening of the final cut of Constantine.


"The movie kicked major ass and it's probably Keanu's best performance since the original Matrix."

Go here to read them.

...and poor self here has to wait even longer, although she neither can *_*

uh..anybody else get the idea these "reviews" are written by high school kids? I'm just sayin'...

Wonderful pictures (hee I was gonna do something just like that, thanks krix!) and I am looking forward to this, even though I don't like teh horrah

Wasn't it great to see the K-man laughing and smiling in that interview? *swoon*

This picture would make a lovely wallpaper. *hint hint* :)

i agree.... i'm getting into wallpapers!!

Is that "fake smoke" you've used there in the background of this pic? Your right, it would look great as a wallpaper! I love it!

Yeah, we all wanna go to hell and back with John Constantine!!! Sounds really cool. BTW, Krix, where is Wee Neo? Just seen some alarming pictures at Club-Keanu/ Keanuholic.com blog of "a" Wee Neo apparently attacking Real Keanu -who, by the way, put him into his place effortlessly- during an interview in Japan!!! Must have been an evil clone, but since I've already seen some envious attitude of our Wee Neo toward his Alter Egos (if memory assists me, once he behaved quite aggressevely with a Wee Thomas Anderson), I'm worried. Please, make sure Wee Neo is grateful and respectful to his Master and Creator. As he's travelling around the world, he could show up at some premiere, say Constantine one, and do some "coup de théâtre" just to get the spotlights on him once again. I mean no offence, but the little guy acts like a prima donna sometimes. Remind him he should be glad to be back in the limelight with the Special Matrix Edition...

Krix, are you the key master? I am the Gatekeeper.

The rest of you will be roasted in the pit of the Slor on that day!

Wee Neo is a little behind in writing his postcards... :(

V...are you quoting from "Ghost Busters"? IMDB has it listed as Sci-Fi, Fantasy, Comedy...sounds right to me.

Posted by: wanda on December 5, 2004 10:15 AM
What's on your mind?.....
(new here? please read this before commenting)
Remember, this is a fan site.
Keanu Reeves is in no way connnected to this website.
Please do not make a comment thinking he will read it.
Comments are for discussion with other fans.
Thank you.