in his stars and houses 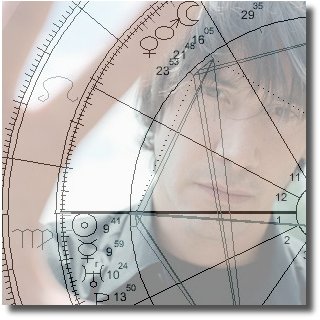 From the page: "I don’t have Mr. Reeves’ actual time of birth, so I ran a chart with his Sun on the Ascendant (called a solar chart). For that reason, I will not be including an interpretation of house positions."

It's a very well written interpretation and shows both her knowledge of the art and her love for the subject.

Virgo is the sixth sign of the zodiac and is an Earth sign ruled by the planet Mercury. Virgos are known for being practical, down-to-earth, perfectionist, critical, and helpful. They are flexible and good organizers, and seem to be more interested in doing the best job possible than applause or personal acclaim for its own sake. This makes them humble and self-effacing at times. Since they are ruled by Mercury, Virgos like to talk, but don’t favor idle conversation. They can even be considered shy. Virgos are greatly interested in health and hygiene and are known for preferring to keep clean. Virgos have natural healing abilities which make them great friends and sounding-boards for those they care about. They are good listeners and counselors of the first water, offering the distressed well-considered and practical advice. Virgos also make superbly loyal friends; once you earn his trust, he is your friend indefinitely.

There is an appealing vulnerability about a Virgo, even when he is protesting to the contrary. That springs from the symbolism of the virgin. This does not always refer to the sexual connotation of virginity; this is a deeper sense…a purity of spirit, and an innocence that remains through life, no matter what has happened to him. This inner sense of purity often leads the Virgo to seek the same in his surroundings, giving them the reputation for being obsessed with neatness. Coupled with this purity is an earthy sensuality that manifests itself in a preference for natural fabrics and fibers, a green thumb and a gift for growing things. This earthiness makes the Virgo enjoy being outdoors as nature soothes his often-frazzled nerves and puts him at peace.

Go here to read the whole thing. Thanks to Tabitha for letting me share it here.

(The background on the page makes it difficult to read on some monitors (I had no trouble at home but could barely read it at work) so here is a text file of the information, with Tabitha's permission.)

The wonderful V. did my chart recently and it's amazing how accurate the details can be.

very lovely and interesting!
of course i have to do an immediate chart for me as well!

yes he is the one!

The concept of the Natal chart is an interesting one to be sure. Keanu's is facinating. I had mine done last year sometime around August. I think somehow it must correspond to your birthday...oh, yeah...that is what it says.

...once again, thanks to the ever insightful V.

I have seen several astrology sites with quickie Keanu charts. Some of them list his birth time as 5:41 a.m. Since this is such an odd time, I assume the information must be accurate....but who knows.

Wow...this is psychic because I just got my own chart online (dug up the baby book and even got my birth time) from astrology.com but of course I have no idea how to interpret it.

krix, that is a beautiful, beautiful pic you did...you're such a talented designer! *smoooochies*

LOVELY just LOVELY thanks Tabitha for the wonderful work you have done here. It is GREATLY appreciated.. more than you may know or realize..

and beautiful artwork as always Krix..

Long ago, star charts were used as part of celestial navigation to enable sea ship navigators to measure the angular elevation of the Sun and other celestial bodies ie. stars, and from this information the navigator's latitude and longitude (location on the Earths surface) could be determined.

The work that must have gone into this. Kudos to Tabitha.
Um, how much do you charge to do these?

LOL@Zenny: I asked her the same question! No answer yet. And I meant to say here: wonderful work, Tabitha. Thank you for sharing with us.

i know i'm late commenting on this thread...however, i w a s up till 4 am with the wonderful report on keanu's natal chart...
and i did research and compare with my chart as well!!! (is that too much... i don't think so!)
as it turns out...(although planet information is very personal i feel i can share some withya!)
i have some matching planets with mr. Reeves as well...!!!!!
chiron in pisces
pluto in virgo
neptune in scorpio

and interestingly...i have a big fn star with jupitersaturn conjunct in the midheaven...

i would love an intrepretation as well...

@keanufan43: it is very very likely that Keanu has this strange sounding birthtime of 5:41 in the morning...I have found the same birthtime, and did his charts over one year ago already.
All I can say in very brief words is, that I have been astrologer for almost 20 years now, and having taken a closer look at his chart therefore feel that this birthtime may be the correct one.
Because that would result in positioning his sun, mercury, pluto and uranus in house 12, which is the house associated with pisces, and those planets are also in conjunction with his ascendant. Given his extremely sensitive radiance, his subtle and unexplainable melancholy and his powerful and virile and yet boyish charisma at the same time, and his mysterious quality as a whole, I think it really very likely that this time IS his birthtime. Sorry for sounding so much like a know-it-all...hmm..only...this is surely something I have been studying for quite a long time in my life.
Although I dont think it that important, if the birthtime is this or that. Surely his planets positioned in cancer and his sun in conjunction with pluto and uranus are also very significant as they express the sensitive and unique and the profound being that he is. Of course there is so much more to say.....;)but my English is too poor..

But I found it very interesting and pleasing to find this lovely work here. *really well done*!

Thanks for posting, krix. I really appreciate it. :o)

I've been swamped, so if anyone emailed me, I just sent responses.

I don't charge for charts as I mainly do this for a hobby. I do take requests, but it'll take me a bit to get back. I love to be thorough.

Posted by: Tabitha on November 20, 2004 12:09 PM
What's on your mind?.....
(new here? please read this before commenting)
Remember, this is a fan site.
Keanu Reeves is in no way connnected to this website.
Please do not make a comment thinking he will read it.
Comments are for discussion with other fans.
Thank you.