when the sun goes down and the moon comes up... 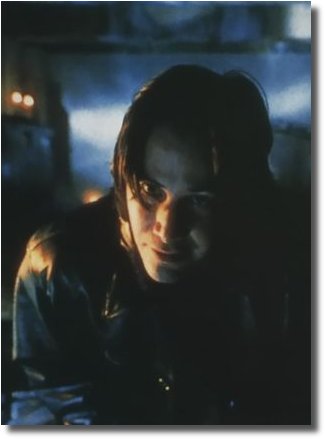 Along with the usual playing dress-up [note to self: must shop. cat ears from Walgreens does not a costume make!] and general trick-or-treatery, I think I'm going to watch The Watcher sometime this weekend. Yeah, it's bad, but Keanu's performance is deliciously creepy. So menacing, yet sooooo sexy, eeeeee!

And thanks to the magic of The Wayback Machine at Archive.org, I was able to unearth the much-missed Keanuland.com's Watcher Drinking Game!

Chug down your drink:

We love the devil bunny dance. 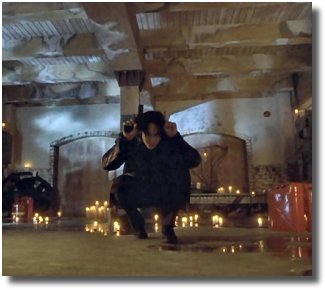 Happy Halloween and have a great weekend, everyone!

I managed to get out of driving a bunch of pre-teens to the old Eastern State Penitentiary in Philadephia for their fright fest, so I'm basking in that victory right now. I have some Jaguar ears left over from 1995, so I think that will be my costume again.

Watching The Watcher is a good idea - maybe for a double feature with Dracula. "I was paralyzed with feah" is a pretty scary line.

I would give just about anything to see a picture of Keanu in the Dolly Parton costume though.

Hey Chianti.. I live in Philly so e-mail me, maybe we can meet up..

In honor of Halloween festivities check out this anti-terrorist drinking game website called Save the humans.com...their motto is "Shock therapy for planet earth." The game is called "Towel, Bloody, Towel":

Each player wraps a towel around his head, supporting an empty cup in the center of his head. A neutral player, acting as judge, shouts "Go!" Players then race to fill up the cups on their heads with beer, using only a single shot glass at a time. After each pour, players must refill their shot glasses from a mug or glass.

The player who fills his cup first (as determined by the judge) is the winner, and all losing players must chug the contents of their own cups. The last player to finish his cup must also drink the winner's cup.

They have these humerous classifieds there as well...Classified # 10 by Aaron Kendall:

"Southern state near Gulf of Mexico apologizing to rain gods for whatever it did lately. Begging to stop sending a f****** hurricane every half turn of the moon. If needed, will supply sacrifices."

...too funny! Hey...Happy Halloween everyone, and have a safe and fun weekend!

whoa, is this a picture him? or an optical illusion. not to change the subject, but what's with all the optical illusions, are those fantasies or realities or just digitally remastered photographs like cd's.

and don't forget we just had that nifty lunar eclipse...

great idea, krix!! I just got a copy of Dracula but don't have Watcher yet...hmmm... working on my own photoshoppy magic right now, which may yet morph into a John Constantine poster as well...

Happy Halloween to you all & Krix!
I love the Watcher. Mr Abraham looks so spine tingling scary in some of the stills at the psychologist office. Maybe the movie is flawed but I enjoy it regularly non the less.

can't help it, but i just luurrv James Spader. the movie sucks, but gotta love keanu and JS together...and nothing beats the devil bunny dance!

halloween is tommorrow i'm pretty sure!
when the sun goes down
the moon lights up for the moon light
is really the light of the sun
on the moon
we live and love like this
i have a tendency to lay low around this time
i've been super tired lately, but feeling
i've pondered moving to a monestry, but i don't think so dear!!!
keanu is the most amazing man, imho.

Happy Halloween to all you monsters, zombies, witches....!

I am looking forward to that halloween night when the moon has come out and my pumpkin glowing awwww ;-)
I just wish I had that Watcher DVD here, but I have to put up with watching Dogma instead ...

Moonlight is beautiful...and historically, Halloween has also been known as "All Saints Day."

That first quote sounds like something off the VooDoo Lounge album........

well... all those candles in that romantically lit place...reminded me of a secluded hideaway
something like a monestary.. but more like a keanuastary!

Yeah, romantic except for all the kerosene poured on the floor!

I watched The Watcher last night for the first time and LOVED it, bloopers and all!

actually i was referring to the exceptional ppix above as sort of a stand alone art...of course if you put view the whole movie, which i have seen 3-4 times in the theater and many more on home video...it's very halloween!

I think, that were I to see Marissa Tomei, I would require far more than two drinks to recover from the abject horror of the experience. Thorazine or ECT may be required.

My washing machine stopped in mid-spin cycle and consequently I will not have dry unmentionables when cometh the dawn. Or maybe I will. I'll just live dangerously.

As always, I just thought I should keep you ladies aprised of things.

Tomorrow is the Day of the Dead. Conjure up your dearly departed with your faulty planchettes and tell them what you really think of them.

Wow...you've seen it way more times than I have Wanda LOL!

But it is scary in this movie how he likes to terrorize his victims before he kills them! Fortunately, the movie ends with him being stopped before he can do any more damage. Keanu gives a glowing performance in this movie...and I love the "bunny dance!" ;-)

I've had that Nancy Sinatra song in my head all day you know. Cheers!

Young to play the FM soundtrack in the car all the time.

I've had that Nancy Sinatra song in my head all day you know. Cheers!

Used to play the FM soundtrack in the car all the time.

Posted by: Keanuette on November 1, 2004 12:44 PM
What's on your mind?.....
(new here? please read this before commenting)
Remember, this is a fan site.
Keanu Reeves is in no way connnected to this website.
Please do not make a comment thinking he will read it.
Comments are for discussion with other fans.
Thank you.