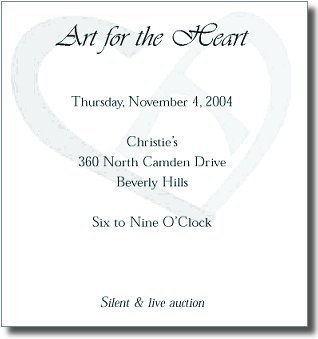 Celebrities including Keanu Reeves, Carrie-Anne Moss and Sean Astin will design a total of 50 unique, heart-shaped plates to be fired and finished by Color Me Mine. They will be displayed gallery-style at Christie's. Each item will be auctioned with a donated personal memorabilia piece. The evening will also include cocktails, food, music and celebrity hosts.

CoachArt is a Los Angeles-based non-profit organization that provides free lessons in the arts and athletics for underpriviliged children with life-threatening illnesses. Click here for more details.

To purchase tickets and to get an idea of what the plates will be like you can go to StubHub.com's page on the auction. Several items are available for online bidding, unfortunately Keanu's is not one of them at the moment.

Charity and love are synonymous.

I WOULD SOOOOO LOVE TO GO.. But unfortunately I live on the wrong side of town.. and in my personal opinion that Jason Ritter is a babe!!! WOOF!

the man is beyond cool, he makes me so proud to be his fan....thanks for the info ; )

lizzie, so beautiful...
it is a heart shaped world.

It's heart-shaped if you want it to be. Unfortunately, some people in the world don't like the way it looks in the shape of a heart. Imagine the kind of people who resort to things like forcefulness, terrorism, degradation, violence and such, as a means to an end *shivers*...there is no love in that.

Zen, I actually tried that but it was just so very wrong.

Yeah, I thought about that. And the brown *is* too perfect to mess with.

what a great event...i've been wanting to make it out to LA again... the costume exhibit, the art for heart event... and definately some pancakes!

what a great event...i've been wanting to make it out to LA again... the costume exhibit, the art for heart event... and definately some pancakes!

i think it'll be a nice event!

if the event actually scheduled, sounds like a wedding, or anniversary of commitment to his heart or something...all the logging, has anyone ever asked who is keanu's reeves heart or will he reveal that information. who makes his heart beat, makes him all mushy inside and blush like a school boy, makes him licks his lips and loses his train of thought and nervous about being in the same room with that person.

I know that's the way, I want to feel about someone. I was just wondering if anyone ever bothered to ask him in that manner.

yes... compliments on the halloween graphics!


Posted by: wanda on October 30, 2004 04:55 PM
What's on your mind?.....
(new here? please read this before commenting)
Remember, this is a fan site.
Keanu Reeves is in no way connnected to this website.
Please do not make a comment thinking he will read it.
Comments are for discussion with other fans.
Thank you.