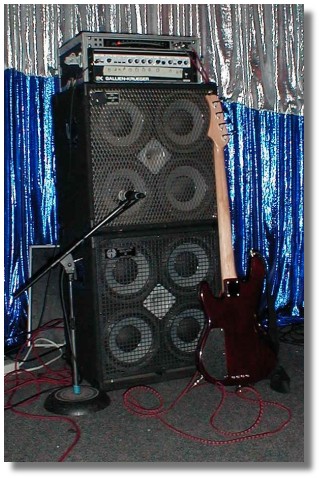 So, I think I've fried the nice Ampeg combo bass amp that Dave lets me use. It peaks out WAY too often and I'm certainly not that ferocious of a player. I don't know what the problem is, but I do know that it's a big source of stress for me to have my sound cut in and out in the middle of a song. Thankfully this hasn't happened live yet, but I fear it will as the problem gets worse with every practice.

It's about time I get my own rig anyway.

You know where this is going, right?

I want the Reeves package (shut up, I'm talking about his amp).

Musician's Friend just extended me enough credit to get a GK 800RB and a SWR Workingman 4x10T.

Should I do it? I know it's a little nutty, but I would be actually using it, not making it part of some weird Keanu-shrine in my basement or anything. And the bottom line is, I kind of trust his judgement on something like this. He could afford any setup he wanted and this is what he went with. I would choose a wine based on his expertise in a second, so why not defer to his many years experience as a bassist?

I'm definitely buying a new amp. We have a gig on the 5th. Tell me I'm not a kook for thinking about buying this one.

I'm also thinking about a SWR Super Redhead 350 watt combo, based on the name alone which is likely an even stupider reason to choose an amp.

You are not a nut.

They have basements in Vegas?

Sweet! This package should vibrate the paint off the walls. At 400 watts, the low end should
sound fantastic. My BX-15 Crate would be absolutely anemic compared to this.
I don't think it's "nutty" at all. I say go for it, and Rock On, Chick.

You're not nuts. His set up is really great, produces a wonderful sound (I have a friend with an almost identical rig). Go for it! Also, I was told to "beware of the redhead."

you want it, just get it. It's a perfectly good set up and you already KNOW what it sounds like under a variety of conditions/venues, right?

This is like asking should I get a black Porsche or will people think I'm a weird stalker because that's what Keanu drives (or something).

Redheads rule, krix!
Go for it, I've heard nothing but praise for Gallien-Krueger -
and the Redhead is not quite as heavy as the Workingman.
As long as you don't play the Coliseum, 350 watts should do the trick.

If I had the money, I know I get get kitted out Keanu style.

Well, the Redhead will cost me the same money, but has less wattage and half the speakers. And I kind of like the idea of getting the amp and the cab seperate.

You're definitely not a kook!
Correct me if I'm wrong, but you are in this for the long haul so you might as well invest in something good. If you can get it, then I say go for it! Does the rest of the band know what you're considering doing? If so, what do they think?

No, they don't know (unless they're reading this). I'm impulsive that way.

i think you should get it just so you can tell people you "got the Reeves package." *snerk!*

Checkout completed. I'm going to be paying on it for years, but it's done.

I hope I can lift it.

I think it's safe to say...you've reviewed the specifications, seen the front/back panels, and took a look at the larger image. All you need do now is to download the owners manual...and la voila!...great music!

Can't make an argument against a package like this one, go for it Krix! Besides, you're in a band...all the more reason ;-)

Congrats!
...and paying for it?
You'll soon have a cd out!

i´m prety sure that porche VAN does carry the amp and the rest of band too ;-)
aaa...may be few of them. do you feel it likewise?

You're not a kook. Musicians buy equipment like musicians they admire all the time because they dig their sound. It doesn't make you weird.

If you weren't in a band though, it would be kind of sad in an obsessed, irrational "buy his chewed gum on ebay for $1200 bucks" kind of way. But you can actually play bass, and it sounds like you'll need it for the next gig to avoid on-stage embarrassment, a version of which was experienced most recently by Ashlee Simpson "singing" on Saturday Night (not entirely) Live. HAH!

I'm Chianti, and I approve this rationalization.

This poses an interesting question. What would you pay for "Reeves' package?"

Puhlease. Like I wouldn't get a Norton if I was shopping for a motorcycle. *rolls eyes* Count one more vote for the "Reeves package".
P.S. I know I'm late, since you've already purchased it, but use this as extra reassurance if you start getting buyer's remorse. ;)

Never ever never. Not when one is talking about the "Reeves Package."

Seeing as how you're going to be using it all thetime, it's a good investment. Go for it.

I don't think there's anybody named kook on the website.

I had to play through the PA at practice last night, which completely sucked. Yay that the delivery date should be monday, in time for the gigs next week.

Posted by: krix on October 29, 2004 02:05 PM
What's on your mind?.....
(new here? please read this before commenting)
Remember, this is a fan site.
Keanu Reeves is in no way connnected to this website.
Please do not make a comment thinking he will read it.
Comments are for discussion with other fans.
Thank you.