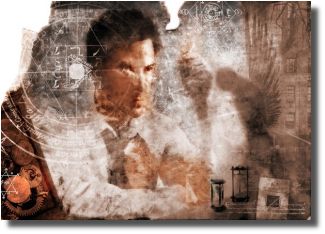 ...it seems shockingly beautiful and good..
gives me a very special feeling as if it was the perfect mirror of horror and joy..

Gargoyle? Griffin?? Angel???
Whatever the winged creature is supposed to be -
it's made me curious to see more Seeligian Constantine!
It perfectly catches the spirit of JC as depicted in the graphic novels,
and hopefully the movie will stay true to that.

PS: Silk Cut, yeah!
I used to live off SC and Coffee,
in an earlier life...

Ha! Me too. Actually I've just switched to rollies. Rolling tabacco tastes so much nicer than regular cigarettes.

wonderful work, artists i admire deeply...i just don't see the angel thing, angels with cigarettes drinking coffee? i don't see the "michael" movie in that role at all..i see the character in the pictures, i don't see keanu or neo,

i see the emergence of constantine the character,(bravo,the very thing actors try to do in the first place) and the cause of the characters frustration...

the numerous burning cigarettes in his life deciding on a choice looking frustrated ....tim, i have to see the movie ...i guess, i am not an expert on cover discussions

fantastic and excellent portraits of Constantine.

Have you read any Hellblazer Kyss ?

John Constantine isn't an angel, but he does smoke like a chimney. He talks to them, usually doesn't like it (refers to Gabriel as The Snob), and has numerous run in's with the first of the Fallen, as well as vampires, succubi, demons and a whole host of other things (the comic has been going since '87, and before that the character was first used in Swamp Thing and was based off sting...at the time).

Grab a some of the graphic novels, even if you just browse through a few in your local comic store.

oooh,oooh, i had quite a spin tim, i can't the frequent comic shops, too deep, just a dancer/actress/chef/artist/ knocked off while pirouetting amongst friends, Gabriel the snob really?.. sarcasm from God's number one angel besides Michael, i'm intrigued, wow, so its a mind chilling thriller??

This picture makes me think of these quotes:

"I think miracles exist in part as gifts and in part as clues that there is something beyond the flat world we see." - Peggy Noonan

"It must be so, for miracles are ceased and therefore we must needs admit the means How things are perfected." - William Shakespeare

...love this one Tim, it really captures the essence of JC.

thanks lizzie now i have a little insight. i was in college sorry i'm not up on the latest comics.

For anyone who hasn't had a chance to have a look at Hellblazer, James has a few issues that you can peruse online and there is a lot of info and history of the title at the Straight to Hell website.

THIS ENTRY also lists some recommended story arcs (available in trade paperback, i.e., all the issues in one book) that you can look for.

i can't access the type of website from my system, i have a pure computer system, i can wait for the film...i definately will have comments after the release, merci beaucoup, krix.

tim seelig does amazing artwork... it is very thought stimulating to me...


miracles, the extraordinary, the impossible, the divine...miracles exist, revised and updated as it were...

verywerymysterious...
truth be told, i take anything keanu does very seriously...i should probably lighten up a bit...but i specially take this constantine thing
very very seriously.... to me, constantine represents a particular place on the path of evolution of man, in an archetypal sense...
i need a moment to think (there's that word again!!) about clearly what that is...more on this today i'm sure.

as far as the kyssyyessyone... what's not to love?

Tim does amazing work yet again. Thanks for posting krix.

wanda,...good stream of conscious ramblings about keanu have but i agree.

but i really deeply admire his life and intellect.

Posted by: kyss on October 22, 2004 05:03 PM
What's on your mind?.....
(new here? please read this before commenting)
Remember, this is a fan site.
Keanu Reeves is in no way connnected to this website.
Please do not make a comment thinking he will read it.
Comments are for discussion with other fans.
Thank you.