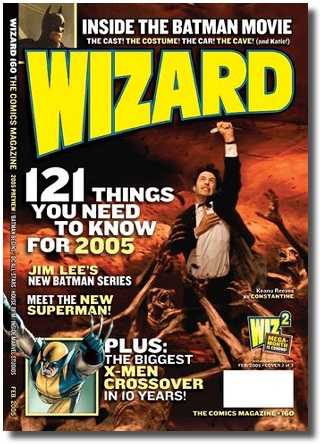 Wizard magazine #160 has a feature on Constantine.
FreezeDriedMovies has a short excerpt of the interview with Keanu (spoiler warning).

SHH has some less-than-glowing screening reviews by some folks who have possibly never picked up a copy of Hellblazer....or a dictionary.

And the crapweasels over at moviehole can fucking bite me.

Yeah they can bite me too. I am gonna quit reading movie reviews altogether (my New Years Resolution) as they are so often wrong, wrong, wrong. And it tends to interfere with my movie going experience. I am the only movie critic I'm interested in hearing from.......

me too...in fact i emailed a reply to moviehole,something which i rarely do..

Poor Keanu can't win when he is bagged by people who haven't even seen the movie yet...argh..

Paranoia notwithstanding, I'd bet that they withhold the good reviews just to validate the whiney-assed misguided predictions they made back when the cast was announced. Where are all the people who were so excited by the trailer at ComicCon? Don't they get to see any of these screenings?

i'll write them a review! tonight.
i do have to tell ya that i had to get a new moniter today

I think it is a matter of "criticize" versus "critique." To "criticize" is to judge and find fault. Whereas a "critique" is an honest evaluation.

Notice how the guy from Moviehole didn't use a lick of first hand information. He took all his material from other sources. He's a "critical critic" without a "critique." I think he just wants to draw attention to himself.

Girls, don't bother with the guy from Moviehole. All the things he says about Keanu have a slam on him. The guy just don't like him and is an idiot. And those reviews, they write so bad that even myself, not being American, can write in a better way, so I will judge after seeing the movie. But I will say, I can't wait to see Keanu because in every review they say he is unlikeable, and if he makes me deslike him in some way, that's because he was spot on in his performance! I even liked Donnie and felt sorry for him in some moments... LOL. Go Keanu. And, Wanda, girl, write your review ASAP! We want to know what a Keanu fan think about the movie! :)

I suppose that the name is an attempt at being witty? Sarcastic? Oh, and calling Keanu a plank of wood? Brilliant; chock full of originality. What do you do for an encore? Let me guess: the Earth revolves around the Sun? Frogs are amphibians? Mitochondria have their own DNA?

Screw these critics and their bad reviews...I'm going back to "painting my bedroom walls" ;-)

Keanu's stock keeps rising on HSX as does the stock for Constantine -- that means more to me than the "reviews" at Asshole (er, I mean Movieassholes -- or something)

no wonder i painteed my nails red!
first of all... we love j.utah.! j. harker. j.constantine. j. longtermmemorydudeguy. j. travern. and anyther j.sthekplays...)
second... heeellloooo....
it's a new new years tradition... the reveiws of the reviews!
keanu is too modest...and these are prescreenings shown probably to some people.
i guess there's nothing to substantiate that 5 page 10 star sparklestudded honey i b r i n g h o m e t h e b a c o n u c o n s t a n t i m e m e filmography...and obviously he's never established or demonstrated any talent in the base/foot ballfield of film making - the most unique collaborative culture framing (and he's n e v e r framed any culture either!) visual art to emerge in the 20th century... he's never been a driving force in the advancement of his industry, oh no...

thank god keanu us always going to be keanu... but still... i have old socks! he lends his considerable talentpackage to his profession. he wakes. us. up. he's got an expert eye.
in fact, i have been so taken with the prebuzz 42filmagery that i am thinkin keanu may be a little 2 constantinian... he knows what he's got and he knows how to use it... with depth.

it's not even good critiqing...just more swimming in the pool of polarized urban myth's
i recommend they post guidlines to proper critiquing...

i believe that acting is the jewel in the crown in filmmaking but you also have to, as i think reeves himself has alluded to, just hope that
your ass is well lit!

I just saw this snippet in the Wizard article, and it says all about what those reviews are saying: " (Constantine)Hes divisive, sneaky, sometimes ambivalent and largely un-heroic, so even if Constantine saves the world, can he win over the audience? There are certain sequences where hes probably not the nicest guy in the world, admits Reeves, who enjoyed tapping into the characters dark persona. He makes a sacrifice in the end, so hopefully theres something redeeming about him. Otherwise, why do it? But hes a hard man to love. "

This is so great! Once more we know that the man did exactly what the director wanted, what the character meant to be: HARD TO LOVE. Just as that. If people are having those reactions it's because Keanu did his work just the way he had to do! Just that! You go Keanu, make me not love John Constantine. Can't wait.

i agree ale...
i talked not too long ago with a friend in the spiritual/comic business and he said the same!

he's (the character of John Constantine) supposed to be darker than dark...saltycrusty and hardboiled and he warned me to stay away! heh!
you've heard of the dark night of the soul
or meeting the dweller on the threshhold...
he's beyond that....(both of which i also happen to think are being portrayed for j.public here:) )
and you articulated what i was also thinking about him working with the directors doing what they want...

I'm not wasting my breath for people who judge Keanu so fast like that just in hope for a dry lame laugh.

Krix, crapweasels is definetely a good name for them.

"I have no words for how positively... whacked you are"
-Nelson Moss

er... not sure if i got that quote completely accurate...

Posted by: Cornflakes on January 1, 2005 12:55 PM
What's on your mind?.....
(new here? please read this before commenting)
Remember, this is a fan site.
Keanu Reeves is in no way connnected to this website.
Please do not make a comment thinking he will read it.
Comments are for discussion with other fans.
Thank you.