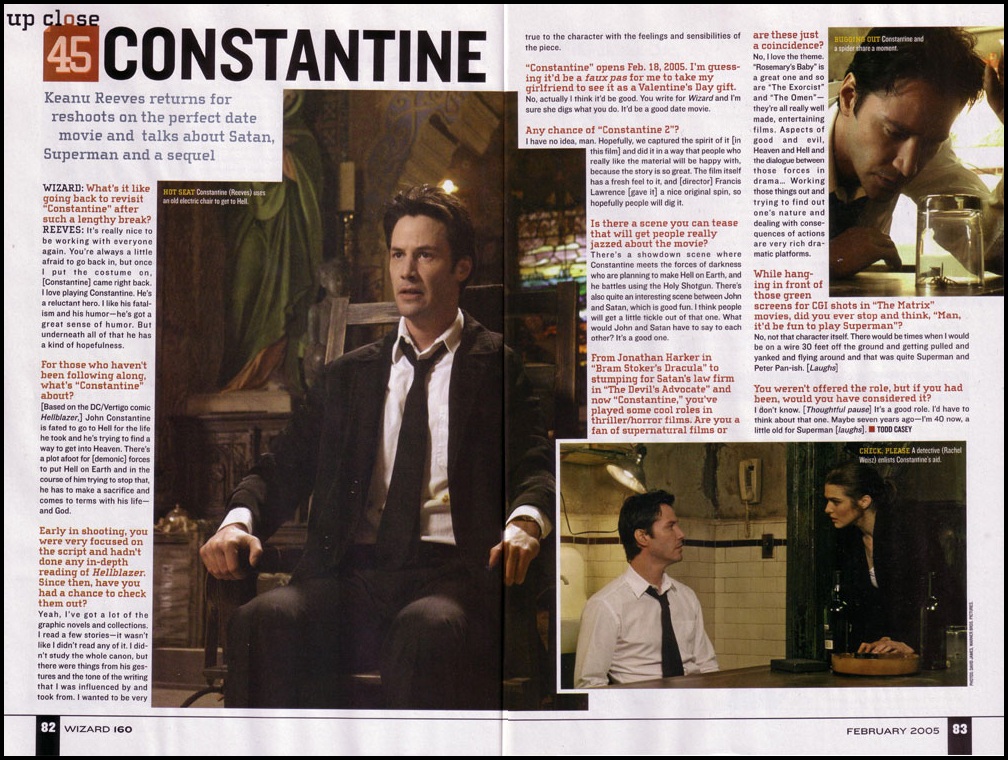 Keanu Reeves returns for reshoots on the perfect date movie and talks about Satan, Superman and a sequel...

WIZARD: What's it like going back to revisit "Constantine" after such a lengthy break?

REEVES: It's really nice to be working with everyone again. You're always a little afraid to go back in, but once I put the costume on, [Constantine] came right back. I love playing Constantine. He's a reluctant hero. I like his fatalism and his humor-he's got a great sense of humor. But underneath all of that he has a kind of hopefulness.

For those who haven't been following along, what's "Constantine" about?

[Based on the DC/Vertigo comic Hellblazer,] John Constantine is fated to go to Hell for the life he took and he's trying to find a way to get into Heaven. There's a plot afoot for [demonic] forces to put Hell on Earth and in the course of him trying to stop that, he has to make a sacrifice and comes to terms with his life - and God.

Early in shooting, you were very focused on the script and hadn't done any in-depth reading of Hellblazer. Since then, have you had a chance to check them out?

Yeah, I've got a lot of the graphic novels and collections. I read a few stories-it wasn't like I didn't read any of it. I didn't study the whole canon, but there were things from his gestures and the tone of the writing that I was influenced by and took from. I wanted to be very true to the character with the feelings and sensibilities of the piece.

No, actually I think it'd be good. You write for Wizard and I'm sure she digs what you do. It'd be a good date movie.

Any chance of "Constantine 2"?

I have no idea, man. Hopefully, we captured the spirit of it [in this film] and did it in away that people who really like the material will be happy with, because the story is so great. The film itself has a fresh feel to it, and [director] Francis Lawrence [gave it] a nice original spin, so hopefully people will dig it.

Is there a scene you can tease that will get people really jazzed about the movie?

There's a showdown scene where Constantine meets the forces of darkness, who are planning to make Hell on Earth, and he battles using the Holy Shotgun. There's also quite an interesting scene between John and Satan, which is good fun. I think people will get a little tickle out of that one. What would John and Satan have to say to each other? It's a good one.

From Jonathan Harker in "Bram Stoker's Dracula" to stumping for Satan's law firm in "The Devil's Advocate" and now "Constantine," you've played some cool roles in thriller/horror films. Are you a fan of supernatural films or are these just a coincidence?

No, I love the theme. "Rosemary's Baby" is a great one and so are "The Exorcist" and "The Omen" they're all really well made, entertaining films. Aspects of good and evil, Heaven and Hell and the dialogue between those forces in drama... Working those things out and trying to find out one's nature and dealing with consequences of actions are very rich dramatic platforms.

While hanging in front of those green screens for CGI shots in "The Matrix" movies, did you ever stop and think, "Man, it'd be fun to play Superman"?

No, not that character itself. There would be times when I would be on a wire 30 feet off the ground and getting pulled and yanked and flying around and that was quite Superman and Peter Pan-ish. [Laughs]

You weren't offered the role, but if you had been, would you have considered it?

I don't know. [Thoughtful pause] It's a good role. I'd have to think about that one. Maybe seven years ago-I'm 40 now, a little old for Superman [laughs]. -TODD CASEY

(keanufan.com has an article and image from issue #159)

Thank you, krix, for putting this here, as we out-of-towners have no other chance of seeing it!
But... a date movie??? This guy is too funny!

dude, he'll always be MY superman...but i guess I'M a little old for superman, too, heh? ;)

it's the perfect date movie cause you cling to eachother and bond over the shared movie experience....

I thought THIS about it earlier Niobe:

"I want my first date with Keanu to be the premier of Constantine" LOL!

Am I the only one who is wondering why the interviewer didn't ask about the re-shoots and the need for them? Or if he did ask why the explanation is not mentioned in the article?

It's a pretty fluffy interview. I had hoped there would be more when I bought the mag. CK has new article scans from SciFi mag. I'm not sure if it's any more in depth. I'm guessing that we may never find out what deal with the reshoots was. I can't believe the film still isn't rated, either.

keanu is a great great super man...
(i dig what h e does! she said.)
from what i know and guess at of course....(i always like to say... i don't know everything but i know what i know)
can you imagine going shygirlskkying luxuriantly with him....(i'm sure he's expert at that... i can do intermediate...hot toddies at y/our lesiure....
indulgences all the time in many places...

i was just musing over how he is quite the cats meow!
i can't remember my last date, but i a m contemplating my first one!

keanu is a great great super man...
(i dig what h e does! she said.)
from what i know and guess at of course....(can you imagine going with him....say skkkyiiing(i'm sure he's expert at that... i can do intermediate...hot toddies at y/our lesiure....
i was just musing over how he is quite the cats meow!

You all have read my mind! He will always be my superman too! Yikes, he looks way younger than the one I grew up with on TV! Lori we'll never be too old, LOL.
By the way MOPI is now listed on Netflix, only to be saved I guess until later in January.

Thanks for this krix.

sweet, thanks krix! *sigh* what a guy!

Noooooooo noooooo! You have to be Superman Keanu!! Suuuuperman!!! It's superman!

Oh well, I love him either way he's so great... sigh

...And he's so thoughtful: "No, actually I think it'd be good. You write for Wizard and I'm sure she digs what you do. It'd be a good date movie."

Is it just me, or did ne one find that statement cute?

When and where is the Constantine movie premier?

well... in my mind there's won tonight!
it's called 'constankenutine in heaven'...
he loses the trench, keeps the georgous earthybrn hair nad the deep heaven islookingin your eyes always sparkle twinkle, takes off his tie (i help).... as he sits on a luminous giant chair made out of flowers of starlight which is really sunlight cause the sun is a close up star..!!;)
...a cup, rather likey a mug, sturdy... strong... easy to grasp... comfortable...but there is no handle soit's more like a green tea thingy, appears holding within an elixer somewhat akin to ambrosia... but slightly different... this is an elixer of perfection....
somethnign like tapiocavanillartisianl health, love understanding....it permanently heals down to the dna... transforms as if all senses and sensualities are made anew....he drinks it...and feels great.
everything around him is practically white but with some slight shimmer and pearlization k i n d a of like the rainblows useeon a bubble....
he thinks to him self... i have passed many tests already... over along the path he walks is the brightest whitest optic light he's ever seen...
like Gods pupil but in white... holding all tones, colors energies in complete and perfect resolution... it's everywehre around him...it's source... sitting with him as it has been all along...and he is enjoying this sitting break... he deserves it...in his awareness gaps are being brought together, perfections are being created, even some he cannot yet comprehend...his processes become clearer, if that is possible... he understands and solves many problems and holds this knowldege even though not yet perceptible....

Wanda, that is so beautiful. You are a brilliant poet...and what it conveys...the things of the Spirit, Truth, Love,...also beautiful. A joyful vision you have. Blessings, hope, and peace to you.

Posted by: Lori L on January 2, 2005 11:47 AM
What's on your mind?.....
(new here? please read this before commenting)
Remember, this is a fan site.
Keanu Reeves is in no way connnected to this website.
Please do not make a comment thinking he will read it.
Comments are for discussion with other fans.
Thank you.