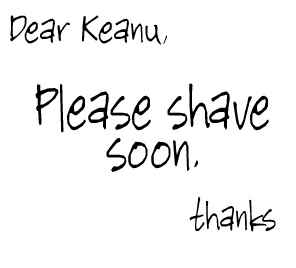 AMEN!!
That face is just too gorgeous to be hidden by all that hair!

I love him with some facial hair, but not the Grizzly Adams look.

If he's enjoying the freedom from the hassle of shaving, it's okay by me. I mean he'll have to shave enventually. Plus a couple of those new pics make me want to get back to basics myself.

A couple of the new pics make me want to weed-whack the backyard.

LMAO@KRIX BAHAHAHAHAHA Yeah I don't mind men with beards, but not that hairy..yikes!!..

LOL@krix! I'm good with it, because I think he's really enjoying it. When I dated a grizzly-type guy it was...erm...very, very nice. Soft in all the right places.

Except for when he gets food stuck in the beard or the mustache. Then I am so out of there.

But then, in his case, that's not likely to be a problem for me. *wink*

That hat makes me cringe more than the hairiness -I mean somebody ought to just say something. Way to blend in Reeves!

I LOVE IT! As usual, you hit the nail on the head.

He's going to have one heck of a tanline when he does finally shave though.

I thought the hat was actually dead...ahaha :) Yeah i hope he shaves soon too.

georgousfacetrue that would be a sexy love scene... me (of course!!!!!!) sitting him (you know!!!) down in a chair, draping a nice hot steamy towel over his face.... hhmmmmmm....

I've never actually experienced this myself having dated guys (and married one) who were/are mostly clean shaven, but apparently, the beard and mustache thing feels really good between the... um, all the, um, *right* places.

Yes, please shave soon. Until then, I will just call you my gorgeous mountain man.

Chianti, he read all those ads that say you can roll a Panama hat and crush it in your suitcase and still wear it...they just never say what it's gonna look like afterwards!

as long as you take off the rest....°ooohooo°

can anyone help me how to check CK or POTD...sorry I am no good with computers at all as it seems...*thanks ever so much*

Hey krix, consider your petition signed by me!
Zenny, I totally agree with you - a beard this long is really soft
*blush*

He can wear a beard if he wants, but I prefer him clean-shaven and without the hat. He looks stunning *sigh*

susan, CK=club-keanu and POTD is the pic of the day yahoo group. Anyone that has recent mag scans or candid pics has a view of his current mega-scraggliness.

I put up with my hubby's beard every winter, but he works outside! I guess a scruffy beard should be shaved unless one wants to hide!

...1 stunning clean shaven coming up: ))...after steamy towel has helped the man relax...and his facial hair...(and, of course, a fantastic neck, shoulder and head massage) take some deliciously smooth creamy shaving cream and s l o w l y s l a t h e r on his face, cheeks, chin... just above upper lip and under nose...making sure to get some on his shoulders, arms and hands... i'll just use my fingers to clean that off...))
then, ummm, you know... ssshh ssh ssshave.

I used to think the same way, but an actor/director friend told me leaving hair & beard growing when not working is a manner of preparing for a next role, any role that might come his way. This way you can say: "well, you can cut my hair, beard and etc how you want the character's".

Now, I think the combo hair&beard is a very cute and thoughtful thing. *smiles*

Can we mail that to him! Post a big ad near his house like a billboard or something!

I sure hope it's for a role in something... I wouldn't enjoy it for a roll... okay who am I kidding It wouldn't stop from a roll with him...

But PLEASE KEANU JUST SHAVE THE DARN THING OFF!! (if it's not for a role)

Ladies, ladies please don't forget on thing: he turned 40 lately! Just give him those four weeks or so to work out his crisis... I do understand if he has more important things in his mind than his shaver in such a hard phase of his lifetime ;-)

Just think positive: the beard is black - not grey!!! This is maybe what he wants to show us. You can color your hair black but it's difficult to color a beard... so peace to Mr. Catweazle!

I like it. It makes him unique and a true individual. I happen to think it's very charming and so very him. Beard, no beard, he's still the same guy underneath it all and that is what truly matters.

The dust jacket may get torn and tattered and slightly faded, but the pages between it will always read the same.

yes Kat! that is what I wanted to express: I like it! it is him, it belongs to him and expresses his personality, it makes me melt...

i feel that way about his various looks... about expressing the personality and the soul....
is one of his 'looks' better than the other...???
hhhmmmm.... it's all good cause it's all him.. but the clean shaven or slightly scruffy 'version' , imho, does show him a bit more.... more of his essence....he's kissy kissy...

you sooooooo did not post this message on my b'day....now I know we have our difference of opinions on the way we like the face to look but oh dear god, my fingers ache to just get in and and like do stuff starting there and um yeah....I am in scruffy heaven!!!!!!!!!!!!!!!!!! but as a way of expressing your opinion, LOL as usual ; )

i would like to see you into a beautiful bedroom with a lot of skin of animals,panthere ,tiger , ..........

AMEN!
He has a beautiful face to be covered with all that beards.

normally i'm not crazy about the grizzly adams look either, especially on a man with a face as beautiful as keanu's. but apparently i'm one of the (very small!) minority here who thinks he looks TOTALLY SEXY like this. if anybody can pull off scruffy and still look sizzling hot, it's keanu reeves!!

I still love him and wouldn't kick him out of bed for it. I just miss his baby face. I'm sure he has a good Reevesian reason for it ("Because I can").

I will admit that if anyone can continue to exude hottness behind all that, it's him.

Yup. I agree with you completely krix. =)

COme on, girls, think like a man for once: he's just enjoying his freedom, letting his hair down and beard hair long. He's always been treated like a doll, a super-himbo. I can understand him if he sometimes feels tired to be that beautiful. He wants to be accepted for what he is. Do you remember what he said about the time he shaved his head? People reacted strangely, and he was like: Hello, it's always the same me. I think he just can do whatever he wants, cause he's between job. ANd as far as I can see, there is no shortage of women for him, even in his bearded version. SO, kudos to you Keanu, you were born free, fight to stay like that, and FTW about what people say.
PS: Ok, I'm biased, because I think he's hot like hell with that beard. And I had a friend who could do such a pleasantly tickling with that beard of his...

Posted by: susan on September 30, 2004 05:39 AM
What's on your mind?.....
(new here? please read this before commenting)
Remember, this is a fan site.
Keanu Reeves is in no way connnected to this website.
Please do not make a comment thinking he will read it.
Comments are for discussion with other fans.
Thank you.