in which my broke ass is mocked by the eBay gods 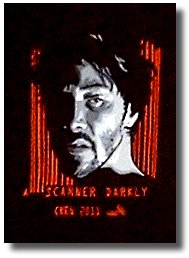 Thanks to those of you who thought of me and my t-shirt collection that emailed and called (!) me to let me know about this totally fucking cool "A Scanner Darkly" t-shirt up on eBay. Along with that, there's also a Constantine camera crew shirt and a ballcap too. Unfortunately, I really can't afford to feed my Substance K addiction this month. I've no budget for frivolousness, I may even have to start buying cheaper vodka.

Anyway, let's discuss how awesome the image is in that Scanner shirt, huh?
Keanu's going to make a great Bob Arctor. If the finished film has that kind of detail in the animation, like Nudel, I'm going to be very happy. I'm already thinking ahead to how cool the DVD grabs are going to look. I want to wallpaper my bathroom with them.

I'm still in the process of reading the book. I haven't done any reading at all in the past month or so but I made a big dent in it yesterday in between napping and eating leftover BBQ. I'm determined to finish it by the end of the week. I don't know if it's good or bad that I'm picturing the cast of the movie while I read, but I just can't help it. Especially the parts with Barris. Downey was such a perfect choice.

I can't believe we have to wait a whole year for this film's release...

Oh well, maybe some more crew t-shirts will need a good home by then.

Oh, Krix sound like she's not in her best mood...

WHAT can I do for you to make you feel better?

Shall I send a vodka survival package?
I could send Mr. Reeves a telegram that he has to move his ass right in front of your appartements door teaching you some ultimative bass riffs?
Or?
What else?

Although anyone wanting to telegram Reeves to request that he do anything with his ass on my behalf is always appreciated ;)

I've already drooled over this picture enough at nudel's place, but, oh what the heck. *drool*

**GAH** talk about a teaser! i totally know what you mean about being broke -- i can't even allow myself to walk into cd stores anymore. or i'd be checkin' it out on ebay, man.

i am SO glad i read the book before the cast was made known. i agree that most of them fit really well, but i didn't have their faces in my head when i read it. oddly enough, not even keanu for Arctor (go figure). but it's gonna be a doozy. cannot wait -- more scanner stuff! wheeeee!

That’s some expensive stuff they’re trying to pawn off on ebay. I love ebay, but I hate when people come in at the last minute and try to snipe stuff, it’s really not in the spirit of the thing. It really looks bad for them when they do this sort of thing.

I don’t think I’ll bid in this auction. But for those that do, I hope they have enough money to cover the cost of a bidding war over Keanu related merchandise. I can imagine it would get quite expensive. I understand if they are unable to live up to the promise of the bid, they get negative feedback, they loose points, and their sellers reputation gets tarnished. Ebay is big business for the little guy...LOL!

Hee, shelz, I on the other hand was thinking--4 days to go, why are they bidding up NOW, they should be waiting to the last minute so it won't go as high...

Already waaaay out of my range. Well, maybe once the other crew see it they will sell "the shirts off their backs"...

Ebay is nice because it works to bring buyers and sellers closer together with their Keanu fan merchandise. Thanks Ebay! LOL!

I LOVE THAT BOOK IT ROX! The only character I allowed myself to check on the cast of A Scanner Darkly was our substance K here. The others, I didn't check till I finished the book.

Well, I WAS going to win you that shirt as a surprise...but it quickly went over my limit within minutes of my bidding. lol Sorry. :/

Anybody want some brownies? Normal brownies, that is...

Posted by: Tabitha on September 10, 2004 10:49 AM
What's on your mind?.....
(new here? please read this before commenting)
Remember, this is a fan site.
Keanu Reeves is in no way connnected to this website.
Please do not make a comment thinking he will read it.
Comments are for discussion with other fans.
Thank you.