it's what you do that's compelling me 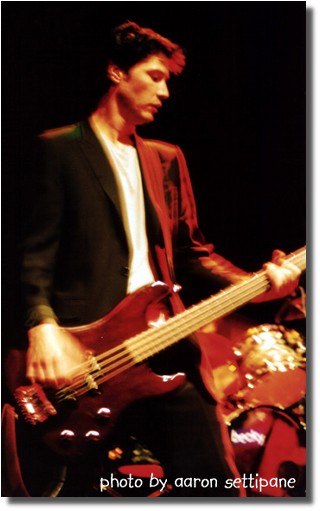 As of the night before last, my Keanu bass dreams outnumber my Keanu sex dreams.

I haven't decided if I like this or not, I seem to wake up just as exhausted.

Roi has flat-out refused to sing about being anyone's "concubine" so covering Higher Ground is right out. The good news is: The Vibemerchants will be covering becky's Oblivious at an upcoming gig.

I just need Dream!Keanu to give me a few pointers on that solo of his....

At least you're having Keanu dreams. LOL Mine seem to be few and far between or maybe I just don't remember them! LOL
Good choice on the cover song. If Roi won't do Higher Ground then Oblivious is a nice runner-up! Have you guys considered doing any Dogstar covers? I think Honesty Anyway would be a great song for you guys to do!

I could imagine that both ways of getting exhausted are very nice...
I remember several striking dreams about Keanu...although no sex dreams...

*blink blink* i have sexy keanu dreams all time... bass players make better lovers...there's something to think about!

They make better lovers cuz their fingers are just so flexible. ;)
Cool on the gigs. Who will be singing it? Will you be keeping the lead female or going for a guy lead on that song?

Whoa! Oblivious. It's my favorite becky song because of that bassline throughout, and his solo. Excellent choice!

The good news is: The Vibemerchants will be covering becky's Oblivious at an upcoming gig.

that is good news!

I think thats a good sign. No more longer and Becky will cover your songs ;-)

I hope, we poor people who will not have a chance to catch you live, will be able to hear Vibemerchants' rendition of Oblivios. How about a Vibe-Mix? :)

Higher Ground from the peppers?? I LOVE the peppers....John Frusciante is my other crush!

Higher Ground from the peppers?? I LOVE the peppers....John Frusciante is my other crush!

*Calling up *dream Keanu* to get pointers for Krixy*

The Vibemerchants covering Becky's Oblivious???!!!...now I will be there to see this!!

...I didn't even know the Vibemerchants were thinking of doing a cover of Higher Ground LOL! I'm glad Roi refuses, I would too. Vibemerchants, please don't cover Higher Ground...I'm sorry, but you guys would just suck while playin' that number LOL!

Jesus, shelz. Your "dream Keanu" must be fucking rude, I can't imagine the man saying anything like that.

Shanice, No, not the Peppers (though I love that song). Becky also does a song called 'Higher Ground'.

jeanna, Unfortunately, out of respect for becky and fear of their lawyers there's no way we can record it. Sorry.

Dream!Keanu ... aw, you're so lucky. If I do per chance dream of Keanu, I don't remember my dreams these days. I think it's directly proportional to the amount of sleep I don't get.
I guess I'll have to settle for daydreams. *sigh*

krix, too bad you can't record it. I think there's a lot of fans out here that would enjoy hearing it.

Posted by: shelz on July 19, 2004 10:43 AM
What's on your mind?.....
(new here? please read this before commenting)
Remember, this is a fan site.
Keanu Reeves is in no way connnected to this website.
Please do not make a comment thinking he will read it.
Comments are for discussion with other fans.
Thank you.