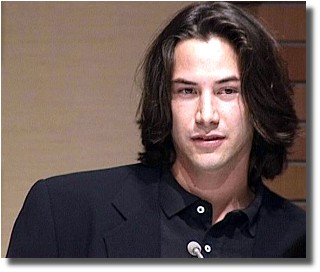 Why did the monkey cross the bridge? To get to the riverside.
So what happens next? Well, according to the "You and Keanu" quizzy thing over at Club-Keanu...


We'll meet at a concert. (check)
His first thought will be that he didn't notice me too much. (I knew I should have had him sign my boobs!)
Our first date will consist of me tackling him and dragging him into the bedroom. (Oh, come on. I'll totally buy him dinner first)
After he gets to know me he will think "there's the door" (What? I think 'plumpmonkey' is a great pet name! Quit throwing stuff!)
How it will all end up? We'll live happily ever after. (Natch)

And while I'm posting silly quizzy things, via damn near everyone , here are the results of my 20 questions personality test:


You are an SEDF--Sober Emotional Destructive Follower. This makes you an evil genius. You are extremely focused and difficult to distract from your tasks. With luck, you have learned to channel your energies into improving your intellect, rather than destroying the weak and unsuspecting.

Your friends may find you remote and a hard nut to crack. Few of your peers know you very well--even those you have known a long time--because you have expert control of the face you put forth to the world. You prefer to observe, calculate, discern and decide. Your decisions are final, and your desire to be right is impenetrable.

You are not to be messed with. You may explode.

I would never presume to take that test on Keanu's behalf, but I like to think he may be a fellow evil genius.

This is Lisa checking in, otherwise know as KOJIMA (small island) MICHIYO (3000 generations)!
I haven't had time to do the other quizzes yet, but I will!
Thanks for the post. :)

And in other headlines, I got my vibemerchants sticker today. Thanks, it made my day! :)

I was so excited. It was just like getting a response from a fan letter! :-)

Ok...my Japanese name is Ishimaru (round stone) Miharu (beautiful clear sky)...and I am wondering how well this really fits for an SRDL - Sober Rational Destructive Leader -- described as "Mob Boss," and having a "Smart head for business" and is a "dangerous enemy"...I may as well have typed in "Guido"

...I'm pretty sure they had "consultant" in mind when they wrote that description LOL! LOL!

I got the same as you in the last test...

You are an SECL--Sober Emotional Constructive Leader. This makes you a politician. You cut deals, you change minds, you make things happen. You would prefer to be liked than respected, but generally people react to you with both. You are very sensitive to criticism, since your entire business is making people happy.

At times your commitment to the happiness of other people can cut into the happiness of you and your loved ones. This is very demanding on those close to you, who may feel neglected. Slowly, you will learn to set your own agenda--including time to yourself.

You are gregarious, friendly, charming and charismatic. You like animals, sports, and beautiful cars. You wear understated gold jewelry and have secret bad habits, like chewing your fingers and fidgeting.

You are very difficult to dislike.

My Japanese name is Kojima(small island)Miku(beautiful crimson). As for the personality test, I am WECL(Wacky, emotional, Constructive, leader). I am the people's advocate. They said "you are passionate about you causes w/a good heart and good endeavors. Your personal fire is contagious and others wish they could be as dedicated to their beliefs as you."

Oh GAWD...that picture...I really can't notice anything beyond it. I actually was gonna post the same one!

I'll pick another one, it's not as if there aren't several!

Thanks krix, got my stickers too! the East Coast is kewl now!

My Japanese name is...Saruwatari (monkey on a crossing bridge) and Yumi (beautiful bow, as in bow and arrow)...
i'm retaking the personality test! results momentarily!

omg, I'm a saruwatara rie, what is it with the monkeys on a bridge and a village painting????
hmmmmmmmmm

You are a WECL--Wacky Emotional Constructive Leader. This makes you a people's advocate. You are passionate about your causes, with a good heart and good endeavors. Your personal fire is contagious, and others wish they could be as dedicated to their beliefs as you are.

...apparently i also have buckets of charisma!!

My name is Saruwatari Miharu (monkey on a crossing bridge...beautiful clear sky.)

my name is girl who type lot for you. sometimes
make typo... big typo...hello!!!!

I did the meme thing at my blog on Saturday. Rehashing the results here:
Where you guys will meet: Diner
What his first thought will be: "oh..hmmm..." *smile*
What your first date will be like: You kept comparing him your ex (the asshole)
After he gets to know you he will think: "oh my god...this is great!"
How it will all end up: Spend your lives gazing into each other's eyes (I can live with that)

And the 20 Questions...SEDF. I just like the title of that site: Jenny Turpish Slapped Me. *snicker*

I am a Sober Rational Constructive Leader. This apparently makes me an Ayn Rand *ideal*.

I am born to lead and though I may not be particularly exciting, I have a strange charisma that people begin to notice when they have been around me a while. I care absolutely nothing what other people think, and this somehow attracts people to me.

P.S. I love the picture on this post. :D

hey there. Got your snail mail yesterday. Thanks for the stickers!
Now, I need to take that other quizzy.

Tabitha...that sounds like the perfect evening. But please do not spoil it by spending all evening comparing to the ex...hasn't he had enough of your attention? Give someone else a chance! LOL!

Zen...boring???!! LOL! LOL! Honest to Pete... silly test!! Where DID they get an idea like that one??!!! Maybe she simply doesn't allow herself be known by people she isn't sure she can trust.

...and Zen...don't you find Ayn Rand to be a bit insensitive sweetie? Its the reason I haven't yet given her the time of day...although many of my colleagues have...and, um...WHAT'S WITH THAT??!! LOL!

Yo shelz! It says "not particularly exiting". No one said anything about boring.
Nobody!
lol

where you guys will meet: concert *logo*
what his first thought will be: "number! number..to hell with number! name name!" *ok, ok*
what your first date will be like: you kept comparing him your ex *no f.... way*
after he gets to know you he will think; "whoa" *guess, me too*
how it will all end up: you dumped him *no, not with these japanese names:*

With my maiden name it would be:
Endoh (distant wisteria) Michiyo (three thousand generations)

*lmao w/Creezy* ...right, not with those Japanese names!

eek! Zenny, I got exactly the same thing: Ayn Rand territory...scary since for about 3 months when I was a freshman in college I was an Objectivist.. I am *so* not like that now..I don't understand, I thought I would come out as Wishy-Washy Emotional Idiot, myself..

The 20 questions meme came up with exactly the same result as yours, krix! First I thought: evil genius... me?? Then again, my boss would probably agree with the outcome. He calls working with me 'an ongoing psychological experiment'... Interesting way to describe the work relationship with your PA, huh?

And now please excuse me while I go and nick a lolly from my colleague in the next room during his absence.

Posted by: cornflakes on July 14, 2004 04:34 PM
What's on your mind?.....
(new here? please read this before commenting)
Remember, this is a fan site.
Keanu Reeves is in no way connnected to this website.
Please do not make a comment thinking he will read it.
Comments are for discussion with other fans.
Thank you.