Can we say enthusiastic? 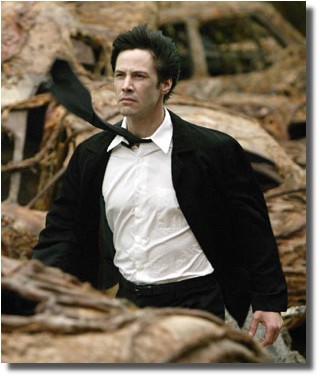 Contains slight spoilers, snarks on Keanu and abuse of the !!!! and ???? keys.

The question remains to Hellblazer fans: How true to character is John Constantine in comparison to ! the comic version? FACTS: Not English, Not blond, No accent, Should be about Sting's age, Should not have a Holy shot gun/weapon, setting does not take place in England (Liverpool), No OVERT CUSSING- AND John loves to do that! Chaz should be older and not a side-kick, etc....... Does that about cover it??????

What is captured that holds/remains true to Hellblazer fans out there: John is a HARD-CORE prolific smoker, dark, gothic, loathsome character, guilt-ridden catholic, subtle sexuality in bed, expels demons through exorcisms, travels to hell and back, cunning and saavy with satan who wants his soul sooooooo bad that is willing to personally come up for it, dark, mysterious past paying his debt to eventually save his own soul, and has lung cancer. There are awesome special effects (demons and other hell scenes), Angel Gabriel is androgenous and he/she ought to be. Satan is awesome.

Read the whole thing at Club-Keanu or the IMDB board

Is it just my impression that this matadoor is condescending and patronizing,
not only towards Keanu?
Hey, I wasn't looking for another would-be critic and his lengthy report,
I'm only interested in a short first impression.

If I want to read good prose, I'll grab me a book or come to this site!

blah blah blah, you can't please all of the peoples all of the time or tyme now can ya?

can i say worth the wait....????
we c a n say enthusiastic... and speak it too...))))))))))) and T Y P E it too!!!!
i've been a reading those posts... i don't think those snarky people are very thoughtful or insightfyl about this project...they are livin in the comic book storage box and not the movie theater... i also talked a bit earlier with a comic-book-meditation friend of mine(used to have a store-in LA, now sells on ebay-he has some hellblazer for sale at http://graphic-illusion.com or on ebay) to see what he thought about some of these "departures" from the comic... considering what i know, ammm.... keanu, and what comic-book-guru-robbababba could manage to generate word wise ( he was throwing the big ones at me like... the Spectre and Etrigen-something... and Jack Kirby...Swampthing...BLACK CANARY...omg)

".... I AM *cough*...John Constant I n e... you sick fucks...don't you get it maaaaannnn...(say *cough*... with englysh accent) I am trying to ditch the owner of uuuummmmm H E L L - in case you haven't WITNESSED *cough*...the fire and brimstone of H E L L... o h let's see... you HAVEN'T and I HAVE!!!! You would raid grandma's bible basket, and everyone else you know too... (ohhh... maybe you don't know anyone with a bible basket...tsk tsk *cough*...) for every holy relic she had too just to make your own personal Holy Shotgun...( pray you find everything you need) I coulda used that in my comic book incarnation... which was not bad so mych BUT i really wanted to get into fucking film...g u e s s w h a t...*cough*...the film capitol of the world is in a place called LOS ANGELS ... ya see i had a d r e a m where i saw 3 sets (get it... sets) of HUGE angels, one of the Dark and one of Christ, battleing/wrestling over the LA rooftops...I w a n t e d t o g e t o u t of England...it sucks there...and that dream told me to go to LOS ANGELS... where there is a much better quality of Angels in LOS fucking ANGELS, CA...USA...mmmaaaannnnnn....*cough*...*cough*...
that country's waging a war on some pretty evil stuff too... just like meeeeeee....
....*cough

I thought ya knew, I'm a big snarky occultist... that means i follow the path of knowledge while, in my case, i kick and scream on my way out of BOX-OF-HELL to enlightenment aka... somewhere NOT THERE...(...even if i don't know i'm heading in that direction (which IS UP!)...maby you fucking can relate *cough*.......maaannnn...)
a n d it means i don't tell YOU about every fucking thing in my BIG BAG of SNARKY FUCKING occultist tricks... LIKE maybe I took a BIG HINT from the only other guy who faced down the spirit of EVIL on our planet which trys to snarkily ensnare you a l l in a pit of lies... he said tome.. try the HOLY WATER DUDE...on the FEET...maybe there is a reason for that!!!!
IT'S CALLED ANOINTING...PURIFYING... as an occultist...it may be a WISE AS A SERPENT BUT GENTLE AS A DOVE Admontition...

and another thing...the blond hair was j u s t n o t m e....snark and *cough*...
i'm a dark brooding type... a tortured soul...not a fun in the sun BLOND... maaaaaan...(say with Englysh accent)I probably coulda used a grey streak from all the stressing out you archists have foisted my way... even i know the value of a good hair colorist in Whiteoccultistland....and guess what... some of the best are in *cough*...LOS ANGELS....checked out the ley line relationship between Los Angels and England, very interesting...

Gee, i guess there really is NOTHING TO WATCH AT THE MOVIES FOR ALL THE LOYAL FANS OF HECKBLAZER IN THIS !^)$$$$$$$$ production.... that'll be $10.00 at the box office please! Thank you! and have a nice day! smiley face icon.

bwak bwak...said soft feathery chicky )))) i think one of my favorite pieces of music EVER is the 'arrival and reunion'...by dead can dance... actually it's an anonymously written piece of music performed by dcd.

As its name implies the American Bald Eagle is unique to the North American continent, with approximately 65 percent found in British Columbia and Alaska. However, these birds were selected as our national emblem because it was said that the first sounds of early revolutionary struggle awakened these birds from their heights; they flew down and encircled the soldiers with their cries. And, their all white head of feathers fabricates the bald description.

Wanda, I think you need your own blog.

Posted by: krix on June 29, 2004 10:20 PM
What's on your mind?.....
(new here? please read this before commenting)
Remember, this is a fan site.
Keanu Reeves is in no way connnected to this website.
Please do not make a comment thinking he will read it.
Comments are for discussion with other fans.
Thank you.