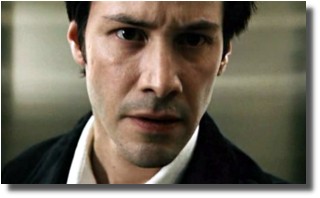 According to SHH and AICN there was a test screening of Constantine over the weekend and some good buzz is coming in.


"Judging this movie as a stand-alone film, it's a thoroughly entertaining, dark, supernatural action-thriller. Keanu reeves rebounds from the MATRIX sequels with a film/character that isn't nearly as bad-ass or ground-breaking as the first installment of Wachowski brothers' trilogy, but certainly delivers some goods. And Francis Lawrence's directorial debut signals the dawn of film-maker's career whom I think is going to fast become an A-lister." -AICN

"The story was absolutely fabulous, it was great." -SHH

"The movie is a trip. And when asked on the questionnaire what scenes I liked the least, I couldn't think of one. There are only two cinematic views of Hell that I've seen that I've ever liked. The one from "What Dreams May Come" and this one. If that's what Hell will be like, thanks but no thanks Satan, I think that party is for someone else. I'll take Heaven. The paranormal and religious themes were heavy and several of them had the audience jumping like I haven't seen since I saw the re-release of "The Exorcist" in theatres a year or so ago. I wouldn't recommend going into the show expecting to see something along the lines of realism such as "The Exorcist", just see it for the thrill of jumping out of your seat a lot. See it for the humor - most every scene involving John Constantine and a demon in the movie is great, filled with sarcasm like I love - , see it for a good ride, a little suspense - a lot of fun, and a Lucifer, played by Peter Stormare (Lev the Russi an Cosmonaut from Armageddon) that is awesome." -AICN

There are some slight spoilers in the AICN reports, and there are a few more details that *shock* dissappoint the Hellblazer fans, but the sneak peekers judged the movie on its own merits and seemed to like it quite a bit, so...you know, yay!

All in all though, this news sounds pretty promising and I'm all popcorn and pom-poms enthusiastic about these first reactions. Especially the good things about Keanu's performance.

bwaaahahaaha...krix, sometimes I get up in the morning, just to read your headlines...well done.

I enjoyed reading the reports, but ya know? I still hate Harry. I'm trying not to get my hopes up too much.

I'm sooo looking forward to seeing this movie, I hope because of some positive previews it would help move up the schedule or it can be shown in Summer 2005 (not looking forward to this). Okay, this already happened to Speed, where are the bad previews when you need it. ;)

I am already lovin' this film...I hope they move up the schedule.

i have no doubt that constantine is not exorcist... and that there is imparted to the film by mr reeves message, purpose and reason as we journey with him through that underworld depiction, that may, for the moment, remain undeciphered...
he has an angel on his shoulder... no doubt...i wonder if the angel was with him during that shoot?????? YES!!!! i'm very anxious to see this one...

No fair! I want to go and work w/ those people just for that sneak peak now... lol

*thinking thinking*... was j u s t talking about this... why some parts and films are right for some actors and not for others...the themes in this movie will prove to be intense... i think people n e e d to be aware that these levels of reality are out there...it's basic bible 101, isn't it? (jesus confronts and defeats the adversary - the ultimate depiction of spiritual light vs spiritual dark) at the risk of sounding uninformed since i only know a small part of the story... only read a couple/three of the comics...i totally support keanu in this choice of project... let there be light! let there be a holy shotgun... i can't wait to see the film!!!!
maybe there are some gifted psychics or intuitives out there who have had 'the constantine experience'...??????

I am looking forward to seeing this film as well even though from a Hellblazer POV it is seriously flawed. I think Keanu Reeves will do John Constantine justice or at least as much justice as the script allows -- however, I don't think this film will be about spiritual light vs spiritual dark -- at least I hope it won't be! John Constantine is about ambiguity -- he messes about with both sides -- It sounds as if the script at least aludes to that concept and its all to the good if it does -- it seems to me that is the kind of character that KR does well --

What's WB's policy here?
A preview now of a movie due out in Feb. 2005?
Anyway, glad they seem to like it...
though, like Nudel, you could call me a sceptic.
I want to experience JC on my own before passing judgment.

jude... v e r y interesting comments... you are probably right... the film will be about john constantine (hence the title of the reeves starrer) and again, as i said, i know not as much as i will know about it... sometimes i like to read up prior to viewing films and sometimes i like to learn from that moment - meaning when i actually see the film first time without too many preconcieved ideas...(the film is the film - the book is the book it's a zen thing...)

... having said that...i don't think it gets any spiritually darker that a stroll through h*** in anybody's day...(something also done by jesus, according to some texts)

to me...if constantine's been there, done that and doesn't want to go back...perhaps he's a wee bit less than ambiguous about it... holy shotgun and all... bullits of crosses??

(sometimes when i type i'm work out thoughts in my head!!)

if he is a character symbolic of ambiguity, he is touching a chord in today's somewhat ambiguous (lacking clarity of meaning) humanity...one that is more than ever faced with a search for the light of truth, clarity and meaning (certianly, there are many issues to be clarified for humanity en mass today)...

ambiguous humanity( i think lot's of people will see and hear this film!) calls for/must have a need for clarity/answers/direction, even if it's which way NOT to go!!!!! - from above article - "If that's what Hell will be like, thanks but no thanks Satan, I think that party is for someone else. I'll take Heaven." (ooohhhh...I'll take Heaven, too... thanks!!!)...constantine turns up the contrast on joe public's tv set... can ya hear me now??!!!!!

(NOT thumping, but have to refer back to the bible again...) our basic 2000 year old concept of satan and demons does derive from the bible...(correct me if i'm wrong)

Matthew 4:24
News about him spread all over Syria, and people brought to him all who were ill with various diseases, those suffering severe pain, the demon­possessed, those having seizures, and the paralyzed, and he healed them.

"he messes about with both sides"....well...i think i'd want to be on the constantine side of the holy shotgun anyday! as for KR, reeves' ambiguity...he is an actor and actor portrays... is he that portrayal? just off the top of my head, really, he obviously knows his business and his profession and he's at the top of it. top dog if you will...perhaps he's wise beyond his years, his being the one and all...and considering the sheer weight of the subject matter, the visuals, the intensity of mood conveyed... i'm hard pressed to think of anyone BUT reeves for that part... he is e s s e n t i a l...smokey cabernet voice, soulful penetrating eyes... bod for action... cutting a strong silhouette of man (and let's not forget Rachel)...i could go on.... but this is a G rated site!!!

I'm looking forward to this movie. It is gonna be HUGE! Wanda, you are so right, it's HIGH on the success-o-meter. *yay!*

And I'm wondering ... how does a person go about getting on a special screening?!! Sign me up!

They're just testing the water...

I hope they test it over here too. I wouldn't mind a sneek peek.

I thought it was interesting that these enthusiastic reviews didn't sound like a PG-13 film (of course it's not rated yet)...and nobody mentioned Shia LaBoeuf..hmmm..

...you can't shoot at something that doesn't exist. But I do believe the critics serve their purposes, it's just not the same reasons they stay around.

hehe i didn't notice the title had the word cornflakes in it till today, i'm not very observative, am I?

Posted by: cornflakes on June 29, 2004 04:46 PM
What's on your mind?.....
(new here? please read this before commenting)
Remember, this is a fan site.
Keanu Reeves is in no way connnected to this website.
Please do not make a comment thinking he will read it.
Comments are for discussion with other fans.
Thank you.