there is no jiggy 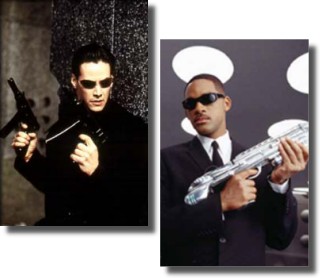 Will Smith, in this WIRED interview:


You turned down the part of Neo in The Matrix - any regrets?
You know, The Matrix is a difficult concept to pitch. In the pitch, I just didn't see it. I watched Keanu's performance - and very rarely do I say this - but I would have messed it up. I would have absolutely messed up The Matrix. At that point I wasn't smart enough as an actor to let the movie be. Whereas Keanu was smart enough to just let it be. Let the movie and the director tell the story, and don't try and perform every moment.

Honestly, I liked him best as the Prince of Bel Air.

There is, was and will be only one Neo on this planet! Basta.

Whatever, I agree with Will. I would have messed it up, too.
Emotionally and physically - especially after a neck surgery he had - no normal person would do stuff like he did after such a kind of surgery. Thats why I am a little bit afraid of him and for him

Will is a nice, nice man. Very well put. He makes a very good point that I don't think I've ever heard anyone else make about Keanu's presence in the trilogy.

Plus I am in awe of how much he digs his wife and kids and isn't afraid to say so.

I agree as well. Like Chianti said, I think he is a great guy, I can't wait for his new movie. I.Robot. :)

I think sanity was never a part of Keanu's equation - not for the Matrix trilogy.
But the way he prepared for the part, not only his body but his mind as well -
was something only a determined perfectionist could bring to the role.
His complete trust in all people involved in the project
turned the trilogy into what it is -
something way beyond and above the norm.

I've read this before about Will Smith...I was very impressed by it, and why I distinctly remember this piece. Will/Jada have a beautiful family, and I have thought this for years.

As for Keanu's equation...I've noticed it before, it is one that works, and I am always amazed by it. I think it makes him exceptional in all walks of life. I think there are very few truly great things in life that are sane LOL!

I love this. Very insightful comments about Keanu's acting. I wish more folks in Hollywood were as aware of what he does.

I will forever be indebted to Will for passing on the Matrix. Yay Will!

*thinking thinking* but keanu is a prince... a prince among men...among humans...*and letting go to the big director in the sky...*

LOL@ There is no jiggy.. very cool caption :) And I support the homie WIll.. and thank him ever so for giving up The Matrix.. nice of his wife to be in it though. very cool! :) Must've been great to work with Keanu lucky chick!!..

Yes, thanks for giving up the Matrix Will. Thank you Keanu for making it so clear...uh, I mean good. Still love the Matrix trilogy...it gets better every day!

Ditto to what everybody else said, thanks Mr. Smith for giving up The Matrix.

Will's new movie with the androids kinda reminds me of a matrixy theme...
Think animatrix.

Posted by: cornflakes on June 26, 2004 03:18 PM
What's on your mind?.....
(new here? please read this before commenting)
Remember, this is a fan site.
Keanu Reeves is in no way connnected to this website.
Please do not make a comment thinking he will read it.
Comments are for discussion with other fans.
Thank you.