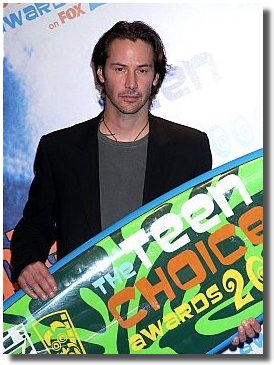 Keanu won last year and he's in the running for a Teen Choice Award again for Actor: Drama/Action Adventure. You can vote here.

that is the most beautiful surfboard award i've ever seen, and that's not just the grand marnier talking!!!!!

and hey! it looks like i can stay with a friend (Margarite)of my other friend in Austin...now to see about the air fare! OMG!!!!

really? will they let me in for a vote? ah. well, how could I explain ah well I am not a teen anymore, still in my thirties (but excellent of course)

Keanu doesn't look so pleased in that picture though, does he? He seems a bit... I dunno...

well, i'm 39 and i voted for him. apparently TEEN PEOPLE forgot to include the id check at the door. ;o) but that damn voting form is soooooooo long, and they only allow one vote per e-mail address.

on a side note, i love that keanu always shows up for these things. a less classy star might have just blown them off, and saved their appearances for the more prestigious awards shows. but keanu always comes and shows his appreciation. whatta guy!!

I think it is cool how many teen fans he has. But my question...just where do you put multiple awards like this one???...the garage?...or maybe you take them out for a spin -- "Point Break" meets "Blue Crush" LOL!

...I watch the Teen Choice Awards every year...don't ask me why, I have no idea!

Hey, A-Z has a snippet on him having dark toned wallpaper
in his NY appartment (black & dark grey).
A dash of color, just like that, wouldn't hurt, IMO...
...not to forget another one of those hopefully soon-to-arrive
buckets of gilded popcorn by MTV,
mmmh, tasteful decoration, every interior designer's secret craving!

Posted by: Jonna on June 4, 2004 04:24 PM
What's on your mind?.....
(new here? please read this before commenting)
Remember, this is a fan site.
Keanu Reeves is in no way connnected to this website.
Please do not make a comment thinking he will read it.
Comments are for discussion with other fans.
Thank you.