The monster between Keanu's legs 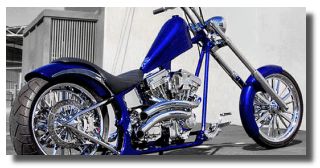 *gasp* ....is as breathtaking as I always thought it would be. Cool bike!

I'm a little chicken but I love motorcycles.

"The Monster between..." shaaaaaaame on you, krix, for the noise you made me make.

Blue - my fave color, he shouldn't use it for offroad, tho...
...and I don't know if any of you have explored the site further:
there's only one other West Coast Chopper store, and it's in Hamburg, my hometown ;-)

Thanks, krix! I tried to find this on their site but couldn't. Does Keanu actually appear on an episode of their TV show? or just the bike?

I'd love to see him riding that baby...*yowza*

I actually really dislike that shade of blue. My sister used to buy me clothes in that color for gifts (she loves it) and I never wore them. I suppose it's not bad on a motorcycle. After looking at the rest of the bike gallery the Blue Dragon is the least obnoxious of them all.
Keanu was on an episode of Monster Garage last year, but the bike wasn't. He did a short segment with Jesse that was mostly about The Matrix films. I think he (affectionately) called Jesse a "sick motherfucker" at one point.

The monster between Keanu's legs, huh? Well, I knew it would be big, but I didn't quite picture it being that color.... :p

Oh Krix how you like to make us blush *blushing*...

...I watch Monster Garage while I get my nails done LOL!

I have no idea what 'sic' means also, Zen! But then again, I'm still a 'Slightly Intoxicated Crooner' at the moment, so my mind isn't working as fast as usual ;-)

Urban Dictionary: sic -
used to decribe something impressive. A substitution for "cool." sometimes followed up by the word "ass" to describe an object rather than an action.

Dude, that's a sic ass car.
That trick you did was sic.

LOL, you Americans are 'sick' when it comes down to language *giggle*

i am laughing so ummmmm.... hard right now!!!
why am i always waking up from a nap!?

thanx for explanation, krix ( i´ve throught "d" intead of s but now i really don´t able to say why). and bike seem like blu wasp-bee.

Heh. I never knew about the word "sic" until this blog! LOL

Great. Now you're gonna hve thinking of something else that's blue. No, it ain't the bike! That is... if you catch my drift. *raspberry noise*

That hog will hunt.

Doesn't look like something he would actually ride on the street. He might as well have added a flashing neon "It's Keanu" on each side.

I figured sic was the new cool. No, I just meant the bike is ugly. ;-P

This blue reminds me of a riddle...if you choke a smurf what color does it turn?

Seriously, I like this chopper and would love to Keanu out and about on this thing.

I have never ridden on a cycle, & yet I live in Harley country! I love that bike! It's a beaut! Hope Keanu doesn't outshine it!! HA!

I have never ridden on a cycle, & yet I live in Harley country! I love that bike! It's a beaut! Hope Keanu doesn't outshine it!!Oh to be that bike ! HA!

Posted by: Vicki/Myingan on May 26, 2004 08:21 AM
What's on your mind?.....
(new here? please read this before commenting)
Remember, this is a fan site.
Keanu Reeves is in no way connnected to this website.
Please do not make a comment thinking he will read it.
Comments are for discussion with other fans.
Thank you.