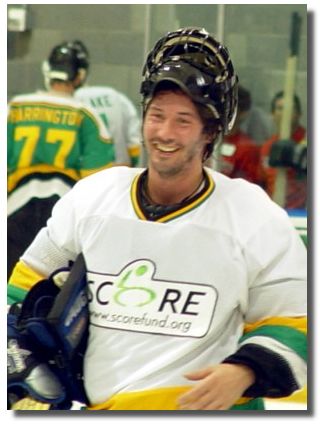 NEW YORK - Movie star Keanu Reeves is the latest in a series of celebrities to participate in the NHL's "HOCKEY ... GET IT? GET IT!" brand advertising campaign.

"When the physical pain begs the mind to quit...will your heart press on?" says Reeves. "Will you sacrifice body and soul to focus on one singular purpose, one unified desire, one perfect dream?" ["Imagining him saying these words makes my pants wet" -krix]

The ad debuts on the NHL on ESPN, May 25 during the Stanley Cup Final and will air throughout the Final on ESPN, ABC and CBC.

Reeves, raised in Toronto and a Canadian citizen, is an avid hockey player and fan. One of his childhood jobs was sharpening skates at a local ice rink skate shop.

The "HOCKEY ... GET IT? GET IT!" campaign began airing in October 2003, and has starred entertainers from the film, television and music industries, including Michael Vartan, Jim Belushi, Denis Leary, Kiefer Sutherland and Shania Twain, along with Olympic Medalists Michelle Kwan and Kristi Yamaguchi.

I enjoyed Denis Leary's ads from a while back. On a personal note, even though the Flyers screwed up again, (what a loser town - to have to depend on a horse to bring you a victory - any victory) but I digress... This gives me a reason to watch the rest of the season anyway. :)

Aww.... my baby's going to be articulating sacrifice. Heh heh heh.... well, guess I'll have to let ESPN run quietly on the 25th. Will it be a voice-over, I wonder, or will we get to SEE him articulating? Hm?

oh dear god, can he get any more perfection squared, oy ; p

...wonder if the European channels that show
the finals will also run the ad???

I am SO watching the Stanley cup playoffs tomorrow! Go Flames!

If he keeps this up Krix I will have to buy some new knickers, or they will all be in the wash. Sigh! (face is red)LOL.

I think I may have seen these adds at some point...we get CBC in MI. This is very cool...and I hope my cable is in fact working by then, as I have called now twice...

...of course, with my luck it probably won't matter as it's quite possible I'll be right here again tomorrow right on my little toushy...working...yeesh!

Uh...new nickname: Keanu is a WO (Walking Orgasmo).

Ok...so SCORE is not the "Service Corp of Retired Executives" LOL! LOL!

Or what Keanu'd be doing if he walked into a room full of us...

Er...I gotta cake in the oven.

Oh, I was busy being dirty that I forgot to gloat...

Oh that was absolute yumminess! Love the part where he walks up to the trophy and says "good luck boys, come and get it." THUD!

ATTENTION INTERNET!
I require a .wav file of him saying "COME AND GET IT" !
okthxbye

yeah, I second what krix says...

Posted by: Nudel on May 25, 2004 06:35 PM
What's on your mind?.....
(new here? please read this before commenting)
Remember, this is a fan site.
Keanu Reeves is in no way connnected to this website.
Please do not make a comment thinking he will read it.
Comments are for discussion with other fans.
Thank you.