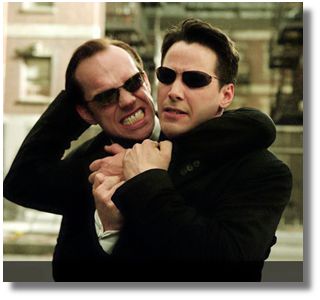 By the way, The Matrix Online is signing up beta-testers.

Who can resist MORE Matrix?

This has nothing to do with this picture...just wanted to tell everyone that I'm gonna be an extra in a film called "The Weather Man," which stars Nicolas Cage & Michael Caine. I go to Chicago on Tuesday, the 11th, and I'll either be a DMV employee or patron. Does this not rock, or what?

Hee! Congrats Renie :-)
I might become an extra without my knowledge too, LOL!

They are shooting 'Ocean 12' in Amsterdam at the moment, and my house is 500 meters (I believe that's less then half a mile) away from the posh hotel where George Clooney, Matt Damon, Brat Pitt and Julia Roberts are staying :-)
Apperently Jeniffer Anniston has just been flown in, too.
And! George has been spotted in Jimmy Woo, a nightclub where I was just 2/3 weeks ago!
Plus! Britney Spears (touring here) was seen in ... Ehm, an 'Amsterdam' establishment that I sometimes frequent. That's all I'm going to say about that though *giggle*

Ha! We're getting very 'Hollywood-ish' over here all of a sudden! I might run into them when getting groceries or something, LOL!
How much do extra's get paid, anyway? ;-D I'm a little broke at the moment *sniffle*

Oh yeah, that TOTALLY rocks Renie!! But be the patron because being a DMV employee in Chicago is just...well...scary! They need to hire the real thing to get the full effect! LOL!

She says "Thank you".

I'd love to be an extra. I wish they were filming on Friday instead because then I'd let them hire me too...I have to work Tuesday...and Wednesday...and Thursday...Renie, are they filming any other days do you know? I could drive in for it and stay the weekend....I love the city.

has anyone seen "the matrix has you" on newgrounds.com? it's actually pretty good. The monkey thing and picture reminded me of a scene from it. check it out....

Posted by: cornflakes on May 10, 2004 07:22 PM
What's on your mind?.....
(new here? please read this before commenting)
Remember, this is a fan site.
Keanu Reeves is in no way connnected to this website.
Please do not make a comment thinking he will read it.
Comments are for discussion with other fans.
Thank you.