both hands of virgo 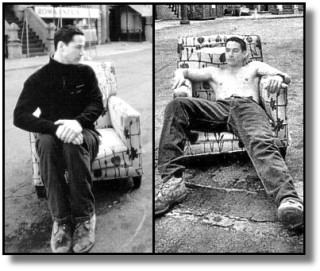 VIRGO (Aug. 23-Sept. 22): You have two options to choose from, Virgo. The contrast between them reminds me of the difference between two singers, Norah Jones and Ani DiFranco. Jones's work is "tasteful and listenable," said the New York Times, though "Nothing much happens in her songs." ShakingThrough.net wrote that though Jones can be maudlin and subdued, she creates "a winning collection of polished (albeit innocuous) gems." About Ani DiFranco, the New York Times noted that "It's worth putting up with a few overbearing moments to hear someone so willing to take chances." Billboard said DiFranco's latest CD is "raw -- for better (the immediacy of the performance) and worse (traces of off-key harmonies)." So which way will you go, Virgo: bland and classy like Jones, or rough and stimulating like DiFranco?

Personally...I like "classy and stimulating," but that doesn't appear to be an option. But I see your point here. Get rid of bland right out!

What a great choice of pictures to go with this post. :D

Bland and classy! I won't be seeing him this week. :)

God, those pictures skin me alive.

The one of him relaxing in the couch is one of my favorite pics of him!

Um, I'll got for the latter thank you very much. A bland Keanu is not my cup of tea.

I need to be roughed up and stimulated and he's just the man for the job ;)

Posted by: Keanuette on April 22, 2004 07:37 AM
What's on your mind?.....
(new here? please read this before commenting)
Remember, this is a fan site.
Keanu Reeves is in no way connnected to this website.
Please do not make a comment thinking he will read it.
Comments are for discussion with other fans.
Thank you.