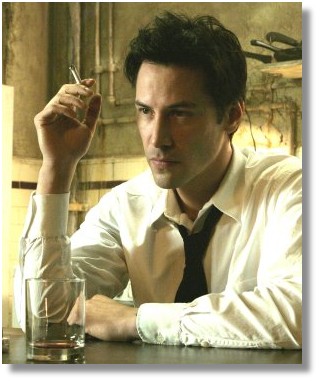 TO HELL AND BACK 5 Questions With...Keanu Reeves --Todd Casey

He can fly. He can fight. And he’s certainly heroic. Keanu Reeves has already played the ultimate superhero as Neo in “The Matrix” trilogy. Now get ready for him as the ultimate anti-hero.

Wizard sat down with Reeves, who trades in Neo’s flowing coat and sunglasses for a plain old shirt and tie as the sarcastic anti-hero John Constantine, and attempts to prevent demons from turning L.A. into a hell on earth in the September-released film “Constantine,” based on the DC/Vertigo comic Hellblazer.


1. What makes John Constantine such a cool guy to play?

I liked his anger. As an actor, it’s fun to play someone who is wounded but fighting. I like his never-give-up attitude and I like his humor, kind of gallows humor.

2. In the comic, Constantine is a bit of a trickster/con man as well as a magician—is he a little more of one or the other in the film?

He has practical magic. He can cast out demons; he has certain powers that he can use. It has a hard-boiled side to it, there’s a mystery afoot. He’s definitely less of a trickster and more of a magician. And a con man? [Exhaling a large cloud of smoke] Yeah, he’s trying to buy his way into heaven. Is he doing what he’s doing because he’s altruistic or is he doing what he’s doing so he can hustle? You don’t know. There’s a bit of a con man in there.

He’s a hustler. He has an insight into the workings of the world and he just hates it. He hates the hypocrisy. He’s also not the nicest guy in the world.

He’s a heroic anti-hero. [laughs] I think of him as a hero because he’s fighting against all odds. I like that he just doesn’t quit, he’s just like “f--k you all!” One of the lines in the film is: “God has a plan for all of us. I had to die, twice, just to figure that out. Some people like it, some people don’t.” That, to me, is how I think of Constantine. He’s a man who is trying to find his place in the world and come to terms with his life and the circumstances of it. “Some people like it and some people don’t”—he’s kind of ambivalent.

5. Will we sympathize with Constantine—or love to hate him?

Hopefully both. There are sequences where he’s not the nicest guy. He makes a sacrifice in the end, so hopefully there is something redeeming about him. But he’s a hard man to love.

i have to say that i'm very excited about this character and movie... being somewhat clairaudient, clirvoyant, clairsentient and whateverelse clair there is, i think this will be important an commentary on people, places and things spiritual or maybe not so spiritual...because isn't the question what is the truth?....keanu has a great uncanny ability to pick projects and characters that are important on MANY LEVELS....))))...as we know...one of his many God given talents that we all get to reap the benefit of! see ya! love-wanda

Yes Wanda, I think he does have an uncanny ability to pick projects and characters...I've thought this before. It is one of the reasons I like his work so much. I can't wait to see this film myself. Why oh why so long WBs???

I wonder if they delayed this so it wouldn't come too close on the heels of Hellboy....

Posted by: Smit too on April 21, 2004 05:29 PM
What's on your mind?.....
(new here? please read this before commenting)
Remember, this is a fan site.
Keanu Reeves is in no way connnected to this website.
Please do not make a comment thinking he will read it.
Comments are for discussion with other fans.
Thank you.